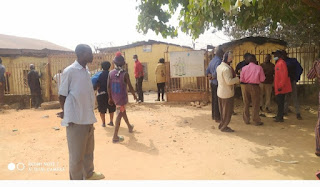 A yet-to-be identified man lost his life in a huge fire outbreak at a hotel where he lodged with a prostitute.

It was gathered that the prostitute and the young man we’re burnt beyond recognition this morning, February 5.

According to reports, the incident occurred at Rainbow hotel, around Hakimi street, Before Bridge in Television, Kaduna state.

A source at the scene stated that the female prostitute and her male customer were drunk, they got suffocated by the smoke and could not escape.