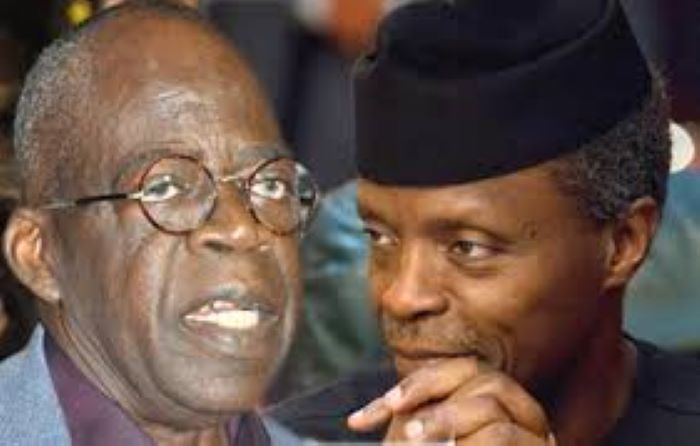 There are indications that prominent groups in the South-West may not persuade the Vice President, Yemi Osinbajo and a former Governor of Lagos State, Asiwaju Bola Tinubu, eyeing the presidency to reach a consensus, investigations by Sunday PUNCH have revealed.

While Tinubu, a former governor of Lagos State had informed the President, Major General Muhammadu Buhari (retd.), about his ambition to succeed him in 2023, Osinbajo had yet to openly declare his own ambition. Nonetheless, different groups are already mobilising for the professor of law to succeed his boss whose second term will expire on May 29, 2023.

Osinbajo, an indigene of Ogun State, was a commissioner in Lagos State when Tinubu was the governor. Both are members of the All Progressives Congress.

Many political watchers have argued that Osinbajo ought not to contest the position with Tinubu who they argued was his (Osinbajo’s) benefactor.

However, those backing the former Lagos State commissioner for justice insisted that he has the right to vie for any position of his choice and is mature enough to decide his political future.

However, there are fears that if the two politicians are allowed to go to the APC primary individually, they could lose the position to another aspirant from other zones.

Apart from the duo, other top contenders for the presidency in the APC are Governor Yahaya Bello of Kogi State and the Governor of Ebonyi State, Dave Umahi. A former governor of Abia State, Senator Orji Uzor Kalu, has also voiced his intention to join the presidential race. There are indications that a former governor of Rivers State and current Minister of Transportation, Mr Rotimi Amaechi, would also join the race while a former Governor of Imo State, Chief Rochas Okorocha, has also announced his intention to run for the presidency. All of them are in the APC.

Another assumed aspirant from the South-West, Governor Kayode Fayemi of Ekiti State, has yet to openly declare his interest in the race.

We can’t ask anyone to step down, says Afenifere

Some groups in Yorubaland concerned about the progress of the region and the development of the country as a whole commented on the ambitions of the two popular APC presidential aspirants.

One of them is the socio-political organisation, Afenifere, which said it didn’t restrict its demand for power shift to the South-West or confined it to regional demand.

It insisted that its demand was clear that there must be restructuring and constitution amendment before the conduct of the 2023 general elections.

Speaking through its Secretary General, Mr Sola Ebiseni, the group stated, “Afenifere has not narrowed it down to the South-West or become regional in our demand for power shift. In our meetings and in conjunction with leaders from the Middle Belt, South-South and others, our demand actually is that there must be restructuring and that the constitution must be amended before the next election is held.’’

The group added that it could not ask either Tinubu or Osinbajo to step down, noting that they were in the same party and could make their decision.

Afenifere stated, “We cannot ask either Tinubu or Osinbajo to step down for the other. Both of them are in the same party. Whatever their decision is (to make), is left to them. They are adults and they know what to do. We are not interested in their ambitions. What we are after is that power must shift from the North to the southern part of the country and that is the position of our group and others like us. We have spoken on this and we will continue to emphasise it. There must be equity and fairness in whatever we do.’’

Also, the Ooni Caucus; a think tank formed by the Ooni of Ife, Oba Adeyeye Ogunwusi, had yet to take a position on whether it would just support any presidential candidate in the region.

One of the caucus’ prominent members and political strategist, Mr Akin Osuntokun, told our correspondent on the phone that he was unsure that the caucus would take a position to support just any presidential candidate.

He said, “The caucus has not taken a position. In any case, I doubt if the caucus will take a position to just support a candidate.”

Osuntokun, however, said that personally, he would support the South-East for the 2023 presidency.

He added, “Personally, I support the zoning of the presidency to the South-East. There are several parties (in the South-West) and the question of asking one person to contest the presidency doesn’t arise. The South-West doesn’t belong to just one person. Again, it is against the spirit of political pluralism within the party system that we operate.

“Now, to start again and mobilise for another Yoruba to become president, that doesn’t conform with the spirit of equity and fairness. That is not how it is done. If we want to have a nation, there should be a binding principle of fairness and equity. If that principle is not present, the nation or country will not endure.’’

When contacted, a Yoruba leader and chieftain of the APC, Chief Olusegun Osoba, said he was not aware of plans or meetings by South-West elders to ensure one presidential candidate to boost chances of the region in 2023.

But when asked if partake in such if invited, he said, “I will not be averse to anything that will create harmony, peace and unity within the Yoruba nation. I am a Yoruba man.’’

Also, the national coordinator of a prominent group in the region who spoke on condition of anonymity when contacted said he was not interested in commenting on the matter.

But the Ekiti State Chairman of South-West Agenda for Asiwaju, Senator Tony Adeniyi, said, “Let the two of them and even others interested in the race from the South-West go for the primary election.

“However, I doubt if Osinbajo will be bold enough to confront and contest against Tinubu at the primary. We have visited almost all the traditional rulers in the region and they have endorsed us.

“We have not said he should not contest, but he won’t get it. Yes, it’s true that Senator Femi Ojudu said he would not vote for Tinubu during the primary. That is democracy and we are not worried about that.

“We won’t begrudge him as well. In politics, you should expect opposition, blackmail, backstabbing and others. There are people who also say they would vote for a candidate from the South-East, South-South and others.

“That is democracy. We won’t fight them. There are people who never see any good things in Tinubu, it is their right to think so, but we are happy such people are in the minority.”

Votes’ll be divided, but Buhari will only handover to a disciplined man – Osinbajo group

Meanwhile, the Osinbajo for President Support Group has said that there was a possibility that votes could be divided at the primary, insisting that the VP would succeed the President.

The group also insisted that the vice-president would contest the election under the APC, adding that the presence of Tinubu on the ballot would not stop him.

The Convener and National Coordinator of the group, Ben Akinbobola, who spoke to Sunday PUNCH, said, “Their presence will definitely affect the votes coming from the South-West and the entire country.

“But we are sure that the VP would win and we can say those who are rooting for the former governor of Lagos State are those who benefited from him while serving in Lagos as the governor.

“There is no way he will support someone from the South-East or the South-South because they were not part of the APC and they did not vote for the party and the President. Therefore, we are not nursing any fear on whether the sharing of votes would make the South-West lose the position or not.’’

Meanwhile, Tinubu is expected to return to Nigeria this week after his consultations with some members of his political party in London.

Authoritative source close to the former governor of Lagos State said the presidential aspirant “is expected back in the country in a few days’ time. I am sure you would see him in Nigeria this week.”

Tinubu’s spokesman, Tunde Rahman, had a few days ago dispelled rumours that the former governor was sick and had to travel to recuperate.

“He is in fine health and excellent spirits,” his spokesman, Tunde Rahman had said.

Rahman said that the 69-year-old ex-governor of Lagos State travelled overseas to hold some meetings and further consultations in line with his 2023 presidential ambition.

He had said, “Asiwaju’s trip to the UK (United Kingdom) is not to rest or because of any illness. While abroad, Asiwaju is maintaining a vigorous schedule of meetings and consultations on a range of important matters.

“Whether at home or abroad, the daily schedule of Asiwaju is vibrant and full. Most people couldn’t sustain his high level of activity. This speaks to his exceptional intellectual energy and his commitment to achievement.”

He then promised that Tinubu would return to Nigeria soon “once this set of meetings and talks abroad is completed.”