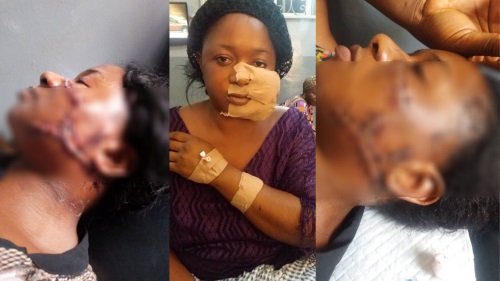 A tenant has cried out for help after a landlord and his wife ganged up to beat the hell out of her.

A Nigerian woman has cried out for help after being physically assaulted by her landlord and his wife.

It was gathered that the Lagos landowner, Samson Ekweozor, and his wife, Anurika Ekweozor beat the hell out of their tenant, Mary Onyian because she refused to exit her apartment after receiving quit notice.

The incident happened at Ikotun-Egbe, according to Sahara Reporters.

Mary, who narrated her experience, said trouble started after the Ekweozors asked her family to vacate the apartment barely a month after they moved in without a plan to refund the rent paid for the apartment.

The refusal of the Onyian family to move out of the house attracted the landlord’s anger, which led to an attack on Mary leaving her face scarred for life.

According to Mary, the landlord and his wife never opened up on the reason for the notice to quit just a month after she and her family moved in.

She said: “We don’t know the reason we were asked to move out. The whole drama started during the lockdown and we had nowhere else to go. I was out of work at that time. We were battling to feed and survive during the lockdown when the landlord and his wife asked us to vacate the apartment, which we had just rented and moved in. Determined to make us leave the apartment, the landlord disconnected our power supply, plunging our apartment into permanent darkness. We resorted to using generators.

“As if disconnecting our power supply was not enough, the landlord disconnected the water supply to our apartment. It was at that point that my husband asked him to refund part of our rent if he truly wanted us to leave. In fact, the reason the landlord and his wife asked us to vacate the apartment is still not clear to us.

“One day, I went to take water from our bowl close to the window, to prepare food for our children and as I was returning to our apartment, our landlord suddenly appeared and held me from behind. His wife used a sharp object to attack me and slash at my face, neck and other parts of my body. Before I knew what was happening, I was covered in blood. It was my screams of pain that caused my husband, who was inside our apartment, to run out. He took one look at me and then took me to the police station, where we reported the case. We were later given a letter and referred to hospital for treatment.

“I spent two weeks at the hospital. In fact, that I didn’t die is nothing short of a miracle. There was so much blood everywhere.”

The victim’s husband, Racherry Onyian said he was already planning to go to the police station to report the landlord for disconnecting power and water supplies to his apartment before the attack on his wife.

He said the landlord wanted to kill his wife and should be charged for attempted murder.

He alleged that the Divisional Police Officer (DPO), who handled the matter, was biased.

“We just moved into the apartment so there was nothing like debt. I wanted to go and report the minor dispute we had when they attacked my wife.

“When I went to Ikotun Police Station the following day, I was shocked to hear the police classify it as something else. I had expected them to charge the landlord and his wife for attempted murder. What annoyed me most was that someone wanted to kill my wife and the DPO was not seeing it as a case of attempted murder. I just don’t understand it,” he said.

Racherry added that the landlord’s wife was arrested after much protest but was released following the directive given by the Inspector General of Police that people with minor offences should be allowed to leave cells.

Racherry said he expected that the landlord and his wife would be arrested again but that did not happen.

He said: “When I was not satisfied with the matter, I went to the police station to demand that the case should be reopened, but met a new DPO. They call him Adagba.”

Racherry said the new DPO handled the matter just like the old one: with levity.

He said he had to go in search of human rights activists and was directed to the co-founder of Advocates for Children and Vulnerable Persons Network (ACVPN), Ebenezer Omejalile.

Omejalile said upon receiving the complaint, the NGO made efforts to reach the former DPO and the new one on the issue but got no positive reply.

He said the human rights group has sent a new petition to the Lagos State Commissioner of Police, Hakeem Odumosu.

“We are hoping that through the intervention of the CP, Mary will get justice, ” he said.

When SaharaReporters reached out to Mary on Friday, she said the landlord and his wife had yet to be rearrested but believed she would get justice with the help of her lawyer.