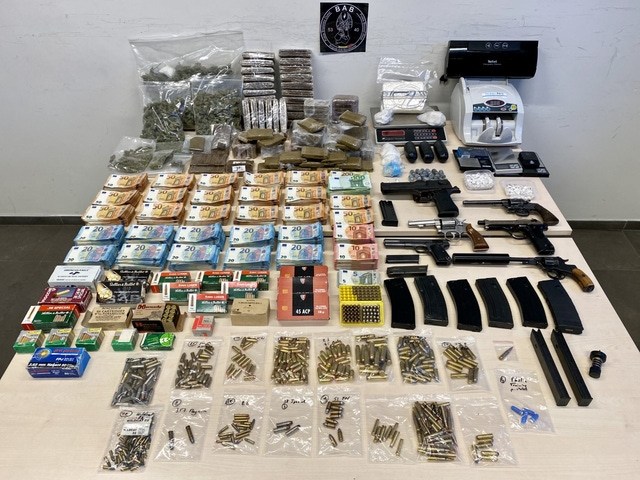 Police from Brussels-West zone yesterday carried out a major raid on the home of an alleged drugs dealer, seizing cars, cash, drugs and firearms.

The raid was carried out by the anti-bandit squad of the Brussels-West zone (Molenbeek, Jette, Ganshoren, Berchem-Sainte-Agathe and Koekelberg) in connection with a wider drugs investigation. The raid itself was preceded by a lengthy period of observations of the house, noting the movements of people and vehicles.

“The suspect was known to the police, and after a number of targeted observations in collaboration with the drugs section of the police zone, an address in Etterbeek and four other people involved were identified,” said Caroline Vervaet of the Brussels-West police zone.

At first, only a small amount of drugs and money was found, but convinced there was more hidden, the squad brought in a specially trained police dog, who discovered a false wall in the basement.

The drugs haul included 16.6kg of hashish, 2.5kg of cocaine, one kilo of cannabis and 283 ecstasy pills.

The arsenal of weapons in the underground space included six handguns, seven loaders for military weapons, a noise-suppressor and 1,265 bullets for various weapons.

The target was also in possession of €146,525 in cash, a banknote counting machine, expensive watches including a Rolex, jewellery, a motorcycle and six cars including a Porsche and a rare Italian Abarth performance car.

All of the above property was taken into custody.

The chief suspect was taken into custody on the spot, and detained, Four more arrests were made later, the subjects released on bail after questioning.