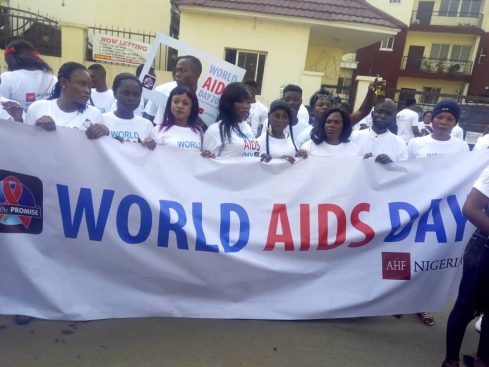 In commemoration of 2018 World Aids Day, the country program director, AIDS HealthCare Foundation, AHF, Dr Echey Ijezie, has revealed that that only about 38 per cent of Nigerians know their HIV status.

Ijezie, made the disclosure over the weekend during the foundation’s road walk in Abuja with the theme “Know Your Status.”

He said “Globally and in Nigeria, there are several millions of people who are HIV positive and do not know their status.

“We encourage all Nigerians to get tested as a large proportion are still not aware of their status.”

He said, to mark the day they are conducting HIV screening for about 50,000 Nigerians and distributing about 300,000 condoms across the six states they operate.

He added that 2018 is major landmark for AHF as an organisation as worldwide, they have passed over 1 million patients-in-care.

Also speaking, the director general, National Agency for the Control of AIDS, (NACA) called on Nigerians to get tested to enable them know their HIV status.

“World AIDS Day is observed on December 1 globally. I had my test a few days ago and I encourage everyone to get tested to know their status,” the DG said.

He explained that that the Day, which was commemorated annually on December 1st, provides the platform for people worldwide to unite in the fight against HIV and also stigmatisation.