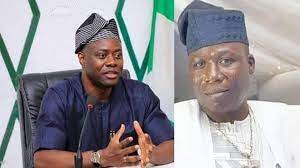 Alliyu, in a post on his Facebook page, said, “The news going around that it was Governo Seyi Makinde that was sending hoodlums to destroy Chief Sunday Igboho’s House or kill anybody wearing Oduduwa Nation or shirt and face cap is far from the truth and should be discountenanced.

“The complaint is that as Chief Security Officer of the State, the Governor should have ordered security men to quench the upheaval that has led to two deaths, though yet unconfirmed, within this weekend alone

“Like I use to say in all my interviews all the six governors of South-West, including Seyi Makinde, are strenuously working behind the scene for the release of Chief Sunday Adeyemo a.k.a. Igboho Oosa.

“Kindly disregard any news on social media linking Governor Seyi Makinde and/or any South-West Governor to the anti-Sunday Igboho movement.”