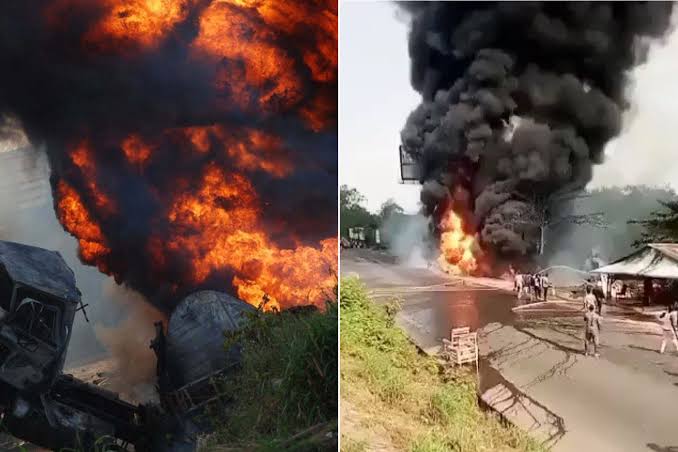 The fire caused panic in the area are vehicles temporarily abandoned the road in front of the filling station while those living close to the scene fled to avoid being caught up in the explosion.

According to a report by The PUNCH, some motorists on Friday deserted the road in front of Olarem Filling Station at the Basorun area of Ibadan as a petrol-laden tanker exploded in the area.

It was gathered that the petrol tanker was discharging fuel to the underground tank at the filling station when fire was noticed under the truck and before the tanker was engulfed by fire, the driver was said to have jumped inside and driven it away to the roadside.

The fire caused panic in the area are vehicles temporarily abandoned the road in front of the filling station while those living close to the scene fled to avoid being caught up in the explosion.

Firefighters were said to have been called and their prompt response reportedly prevented the fire from spreading to adjoining buildings.

One of the residents, who identified herself as Peju Adewuyi, told The PUNCH that the bravery of the tanker driver saved the whole filling station from being destroyed.

He said, ”The tanker was discharging fuel and fire was noticed to have started burning there. The driver just rushed into the truck and drove it away to the roadside. The loss is limited to the tanker but if not for that, the entire filling station might have been razed down.”

The Director of Operations of Oyo State Fire Service, Ismail Adeleke, confirmed the incident in a chat with our correspondent. He said no life was lost in the early morning fire incident.

He said, “We at the Oyo State Fire Services Agency received a distress that exactly 07:24hrs of today Friday that a petrol tanker loaded with 45,000litres of Premium Motor Spirit was on fire at Olarem Petrol Station, Basorun, Ibadan. Our men were promptly deployed to the scene of the fire incident with two fire tenders.

“On arrival, the fire was burning well alight by the time we got there and within a few minutes, it was completely extinguished. No casualty was recorded and the area is now safe and free for vehicular movement. Business activities have fully resumed in the areas.

“The fire occurred during the process of trans-loading the petroleum content from the tanker into the underground tank at the petrol station.

“The fire was extinguished by our men in conjunction with Federal Fire Service and Bovas Fire.

“My advice to the owners of petrol filling stations is to make sure that they are doing the needful in terms of fire safety during their activities in their various station.”