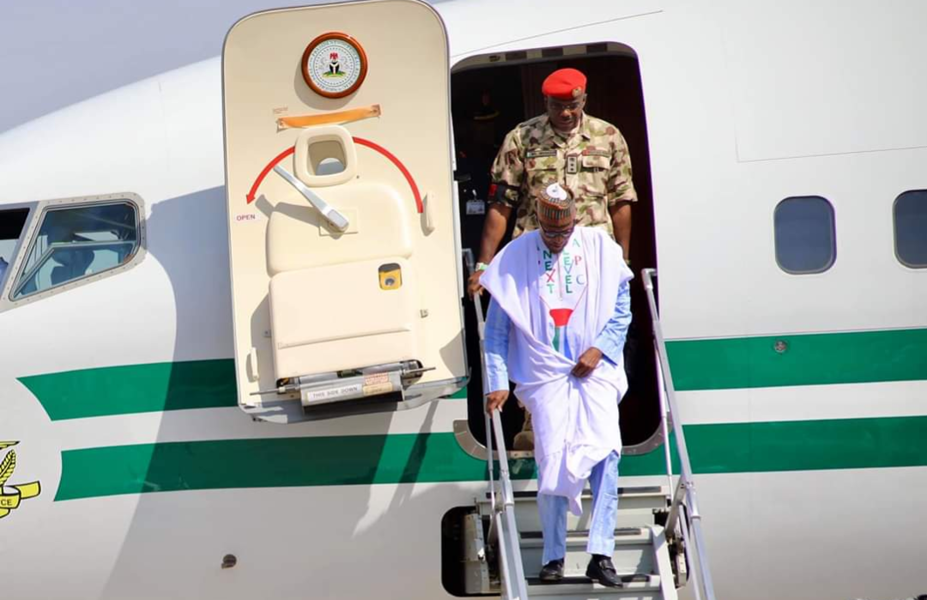 President Muhammadu Buhari has arrived in Maiduguri as part of a one-day official visit to Borno.

The News Agency of Nigeria (NAN) reports that the presidential jet on Thursday landed at the Nigerian Air Force wing of the Maiduguri International Airport at about 11.45 a.m.

The president was received by Gov. Babagana Zulum, his Deputy, Usman Kadafur, members of national and state houses of assembly, and some top government officials.

Babakura Abba-Jatau, The Commissioner of Information, said that Borno Governor Babagana Zulum was honoured to welcome the President.

He said that during the visit, Mr President will commission the Muhammadu Indimi Centre for Distance Learning and an International Conference Centre, both of which were elegantly built for the University of Maiduguri.

“Mr President will also commission three of the numerous landmark projects executed by the administration of Professor Babagana Umara Zulum in two years.

“The projects include Bornos first flyover with upper and lower lanes at the old Customs Roundabout 10-kilometer dualize Maiduguri-Muna road and a new Mega Secondary School in Kushari in Maiduguri.

“The good people of Borno State are always excited to welcome and host President Muhammadu Buhari.

According to him, the visit of the President’s was in recognition of open affection and love for Borno which is demonstrated in his relentless and sincere commitment to the fight against insurgency in spite of challenges in the midst of many victories.