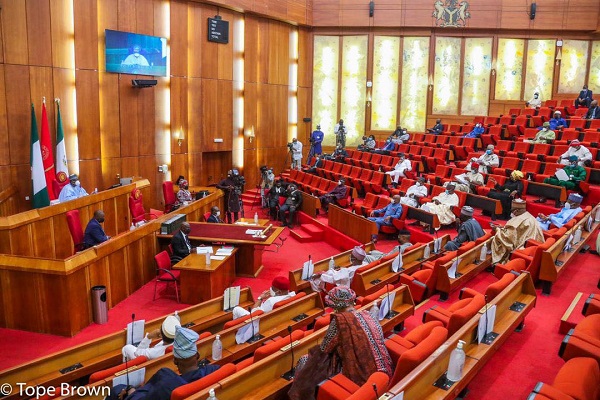 Ahead of the 2023 general elections, the National Assembly has forwarded the electoral act amendment bill to President Muhammadu Buhari for assent.

Senate President Ahmad Lawan made this known in a statement issued by his aide, Babajide Omoworare, on Friday.

He disclosed that the electoral bill was transmitted to the president on Friday in line with Section 58 (3) of the 1999 Constitution of the Federal Republic of Nigeria (as amended) and the Acts Authentication Act Cap. A2 LFN 2004.

“Please be informed that in pursuance of Section 58 (3) of the 1999 Constitution of the Federal Republic of Nigeria (as amended) and the Acts Authentication Act Cap. A2 LFN 2004, the National Assembly has transmitted the Electoral Bill 2021 to Mr. President today Friday, November 19, 2021,” Omoworare said.

Earlier, the Senate and House of Representatives had passed different versions of the bill, and a conference committee was set up to harmonise both bills.

The Upper chamber had constituted a seven-man conference committee to meet with members of the lower chamber Conference Committee and harmonize the differences in the Senate and House versions of the Electoral Act Amendment Bill.

The approval followed an amendment to Clause 52(3) of the Electoral Act (amendment) Bill by Senator Aliyu Sabi Abdullahi (Niger North) during the consideration of a report by the Senate Committee on the Independent National Electoral Commission (INEC).

Meanwhile, Governors elected on the platform of the All Progressives Congress (APC) has allegedly lobbied the Attorney General of the Federation and Minister of Justice, Abubakar Malami, to advise President Muhammadu Buhari against signing the Electoral Act Amendment Bill.

The APC Governors’ Forum is looking to use the influence of the Governor of Kebbi State, Atiku Bagudu, to talk to Malami who is from the state and is reported to be nursing a governorship ambition in 2023.