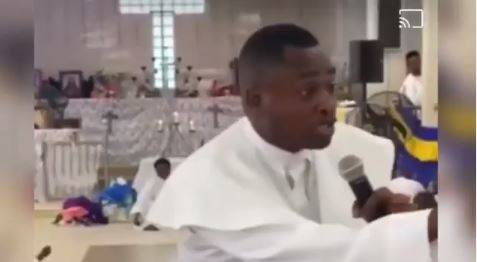 Osibona told the congregation that witches were powerless, adding that they would have been victorious over him if they had power.

An old video has surfaced online showing Femi Osibona, the developer of the 21-storey building that collapsed in the Ikoyi area of Lagos State, preaching about the powerlessness of witches and wizards.

Osibona, in the video shared by @wisdomblogg on Instagram, could be seen addressing the congregation of a Celestial Church of Christ dressed in the church’s uniform — white garment.

Osibona told the congregation that witches were powerless, adding that they would have been victorious over him if they had power.

According to him, when people are going through difficulties, they usually attribute such to enemies, which may not be the case.

He said, “The witches are powerless. If they had power, they would have been victorious over me. Any one of them that tries it will go mad alongside their families.”

He then prayed for members of the church, saying witches would not have power over them.

Other videos of Osibona preaching at white garment churches have flooded the internet since the collapse of the structure.

On Monday, the building located on Gerrard Road, Ikoyi, Lagos collapsed with a yet-to-be-ascertained number of persons still trapped beneath the rubble.

The body of Osibona, who is the owner of the 21-storey building that collapsed in Ikoyi, was discovered on Thursday among others during the ongoing rescue operation.

According to Highbrow Living Magazine, the collapsed property, comprising four-bedroom maisonettes, flats, duplex and penthouses, was 65 percent sold out.

See also  In Africa, toppling statues is a first step in addressing racism, not the last

The price range for the apartment is also said to be between $1.2 million and $5 million.

“The 20-floor strictly residential facility is the brain works of Fourscore Homes, evolving from a desire to build an original masterpiece. The concept is to have service flats in the three towers for residents to experience a stress-free lifestyle, complete with a hotel flair with a 360-degree view of Lagos state,” the magazine reads.

The structure was said to be 80 percent completed and was billed to be concluded in 2022.