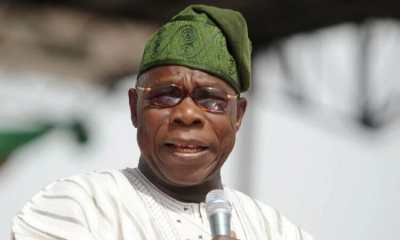 Former President of Nigeria, Chief Olusegun Obasanjo has recommended the setting up of state police as the solution to the security challenges facing the country.

The former leader and statesman who rightly observed that no meaningful development can happen where there is no security, said decisive steps need to be taken by the government to tackle insecurity.

To this end, he recommended that all the 36 states of the federation should be allowed to set up their own police so insecurity can be adequately tackled.

Obasanjo made the submission on Friday in Lagos while delivering his speech at a lecture titled, ‘social responsibility in nation building,’ to mark the 78th anniversary of Island Club.

In his words, “I have said it before and I will say it again. Nigeria should have state police in all the states so that they can adequately tackle insecurity.

“Guaranteeing citizens a safe environment and round security is one thing a government must do.

“No nation can be built where peace, security and stability are not assured or guaranteed and with reasonable predictability of the President and the future not enthroned.”

Meanwhile, the Department of State Services (DSS) says it has observed that many media houses in Nigeria give unnecessary attention to the activities of terrorists, bandits, and separatists.

The secret police has therefore cautioned against such practices, saying the aforementioned criminals should not enjoy free media coverage and publicity.

The DSS in a statement on Friday by its spokesperson, Peter Afunanya said it has observed that certain media houses prefer to sensationalize news about security challenges in Nigeria.

It however warned that such practices must stop as it is counter-productive.

Speaking specifically about the Anambra governorship election scheduled to hold on November 6, the DSS expressed concerns over sensational reports, saying restraint needs to be applied in reporting happenings from the state.