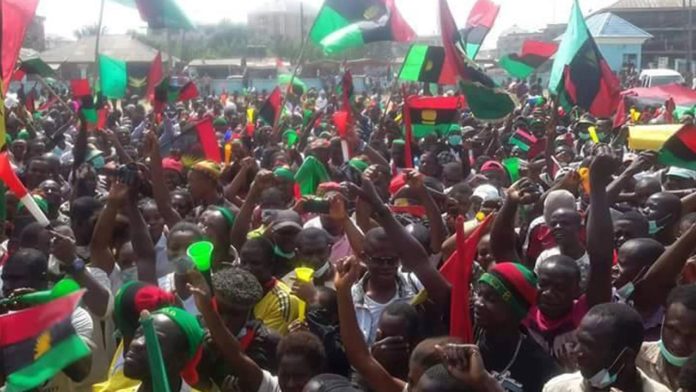 Some northern elders have filed a suit before the Federal High Court in Abuja praying for the secession of the Igbo out of Nigeria to stem the tide of violence and destruction allegedly caused by the agitation for secession championed by the Nnamdi Kanu-led Indigenous People of Biafra (IPOB).

In the suit marked FHC/ABJ/CS/538/2021, the plaintiffs led by Nastura Ashir Shariff, Balarabe Rufa’I, Abdul-Aziz Sulaiman and Aminu Adam are praying the court to compel the National Assembly to hasten the exit of the South-east before the conclusion of an ongoing constitutional amendment.

They claimed that they do not want a repeat of the 1967-1970 civil war that cost the country millions of lives and property worth billions of naira. Listed as defendants in the suit are the Attorney General of the Federation (AGF), Senate President, Speaker of the House of Representatives and the National Assembly.

In the main suit, the northern elders prayed the court for the following reliefs: “A declaration that by the combined effect of the provisions of Section 4 of the 1999 Constitution of the Federal Republic of Nigeria (as amended), and Articles 1, 2, and 20(1) of the African Charter on Human and Peoples’ Rights (Ratification and Enforcement) Act 2004, the 4th defendant (the National Assembly) is empowered to set in motion a framework for a referendum to allow the South Eastern region of the Federal Republic of Nigeria to decide on their bid for self-determination.

Ahead of the November 1 date for the hearing of the suit, legal practitioners from the South-east have applied to the court to join the northern elders as defendants in the case.

The lawyers led by Chief Chuks Muoma (SAN), Ukpai Ukairo, Ebere Uzoatu and Obi Emuka are asking for an order of the court to allow them to join in the suit as representatives of the people of the Southeastern region.

In their application for joinder filed by Victor Onweremadu, the applicants claimed that the case by northern elders seeking the exit of the South-east from Nigeria has the capability to shape the life of the generation of the Igbo.

The motion on notice for the joinder request was brought pursuant to Order 9 rule 5 and order 26 rule 2 of the Federal High Court civil procedure rule 2019.

The lawyers claimed that they had an interest to protect in the suit, hence, their request to be made defendants in the case.

In a 12-paragraph affidavit in support of their application, the lawyers noted that the northern elders in their suit did not think it necessary to join the people of the South-east or their representatives to enable the court to hear from them.

“That the Igbo Lawyers Association represented by the applicants are an indigenous association of lawyers from the South East of Nigeria and other indigenous Igbo speaking tribes in Nigeria. That the Igbo Lawyers Association and its objective is to represent the interest of the Igbo people which said people are indigenous in the South East of Nigeria. Thus, the association is interested and is a necessary party to be joined. That it will serve the interest of justice if the honourable court grants the application and join the applicants as defendants in the suit and that the plaintiffs will not be prejudiced if the application is granted.”