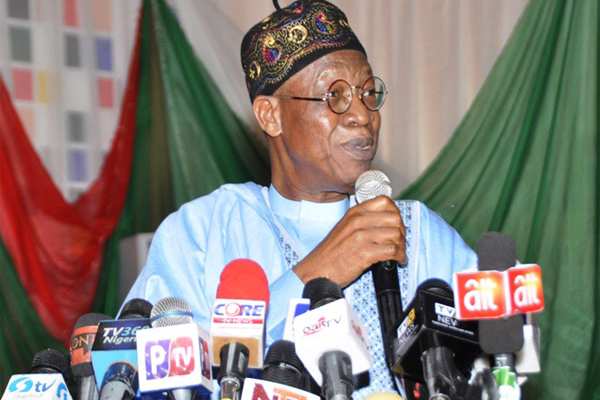 The Federal Government has disclosed how the Peoples Democratic Party (PDP) for failing to win the war against insurgency in the North East in 2015.

In an interview with reporters on Saturday, the Minister of Information and Culture, Lai Mohammed, said before President Muhammadu Buhari took the government, most parts of the Northeast were captured by Boko Haram insurgents.

Mohammed that since the Buhari government took over, Boko Haram and ISWAP terrorists have started surrendering to the Nigerian Army, which shows that peace is returning to the region.

He, however, revealed that with the success recorded, the government is winning the war against the terrorists.

He said: “There is no doubt about the fact that the government is winning the war against the terrorists. A few years ago, when we came in 2015 — of the 20 local government areas in Borno, about 13 were under the effective control of Boko Haram.

“On December 5, 2015, we travelled to Bama, Konduga, Kaure and Maiduguri. The distance from Maiduguri to Bama is about 78 kilometres, but no single vehicle is on the way. It was like a suicide mission.

“The week after we left, a commander was killed on the same route. When we got to Bama, of the over 6,000 houses in Bama, not one was standing. They have all been bombed by Boko Haram.

“Today, go to Bama and see for yourselves. And when we went in 2015, you couldn’t travel more than a few kilometres outside Maiduguri metropolis.

“So, there is no doubt in my mind that we are winning. And if is further evidence; thousands of insurgents that are surrendering speak volumes.”

The minister added that the military has heightened the “assaults and attacks” against the insurgents which have enabled it to reclaim more territories.

“We were in Maiduguri two weeks ago for another very successful town hall meeting where all stakeholders were in attendance like the traditional rulers, the military, police and CSOs.

“The governor confirmed that the heightened assaults and attacks by the military in the theatre had led to the surrender of many insurgents.

“And again, the military has recently acquired more platforms and these are making life difficult for the terrorists. That’s why any time they attempt to come in, they are being repelled fiercely.

“There is no doubt in our minds that the federal government is winning the war, very very much.

“In some places, the activities of Boko Haram and bandits have dovetailed. This is because of the pummeling they are receiving from the military in the north-east, they are moving toward parts of the north-central.

“And here they are linking up with bandits, so there are some handshakes of some sorts. It is just like if you displace water, it will flow somewhere so that’s what is happening.

“But the military is aware of this and I can assure you that in the next few days; that also will be history. The military is doing its best and we are not giving up at all.”