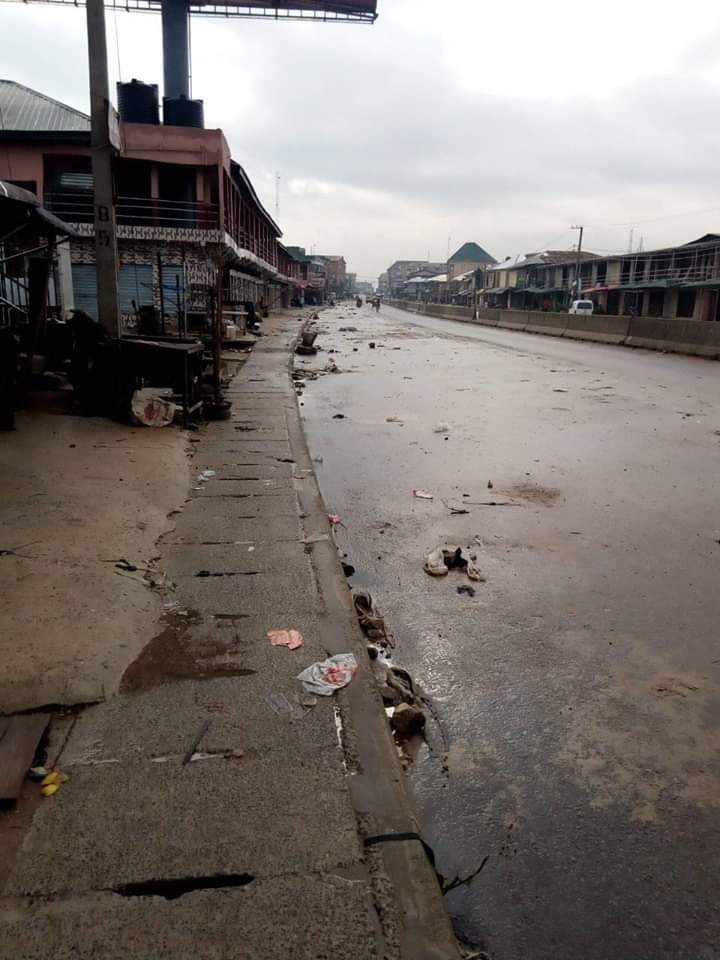 What is happening to the South-East? How come an otherwise peaceful region descended to the nadir where terrorists are on the prowl, trying to overrun the geopolitical zone? Government and men of goodwill cannot stand arms akimbo while the Hobbesian state of nature reigns supreme in the land. Whatever happened to the time-tested Igbo mores of Onye aghana nwanne ya, Ako n’Uche, Igba mbo, Ndu b’Isi?

Happenings in the South-East in recent times are indeed alien to what the people of the zone represent. What started as an attack on law enforcement agents and their facilities has escalated to victimizing every resident of the zone. The sort of sad tales that are customary to the hotbeds of terror in North-East Nigeria is now being recorded in erstwhile peaceful South-East. This is strange because the people of the South-East are highly regarded for their republicanism and their strong belief in Igwe bu ike.

Public infrastructure, particularly facilities and offices of the Nigeria police, Independent National Electoral Commission (INEC), the National Drug Law Enforcement Agency (NDLEA) and others have been the prime targets of these assassins and arsonists just as many security personnel were killed even in their duty post. Prominent Nigerians in the South-East have largely fallen victims in the hands of the so-called unknown gunmen.

Ordinary citizens were not spared as lives and livelihoods were consumed in the conflagration in the name of the enforcement of the so-called sit-at-home order. Trailer-load of motor spare parts worth millions was at a time razed without minding that, that is fellow Igbo’s livelihood that was being destroyed. There was also the burning of a van conveying food items. A lot more destructions of people’s means of livelihood have gone unreported. This is not to mention the billions lost in the South-East by virtue of the shutdown of economic activities on Mondays and whenever IPOB lords wish to lock up the South-East.

This dire situation has escalated to the extent that lives are now being wasted for no reason. The recent gruesome murder of Dr Chike Akunyili, husband of celebrated NAFDAC DG, the late Dora, leaves a bitter taste in the mouth. He is among prominent Nigerians who have either been killed or had attempts made on their lives in a well-coordinated assault.

Only on Thursday, the convoy of the member representing Nnewi North/Nnewi South/Ekwusigo Federal Constituency of Anambra State, Chris Azubogu was attacked by terror bandits in Nnobi, Anambra State. Azubogu, who was a frontline candidate for the PDP governorship ticket for the November 6 election, was not on the convoy, but one of his drivers was killed in the attack which happened at Onuzulogu Road along the road to Ukpor, Ekwusigo Local Government Area of Anambra State.

We recall with regrets that fear that made South-Easterners adhere to IPOB’s sit-at-home order on Mondays that many a WASSCE candidate in the South-East missed their exams. Worthy of mention was the incident at Comprehensive Secondary School, Nkume, Njaba Local Government Area of Imo State, where the English examination organised by the West Africa Examination Council (WAEC) was on Monday, September 13, 2021, ruthlessly scuttled by unknown gunmen, who chased away the students, teachers, and examiners before setting ablaze motorcycles belonging to the teachers. How did the South-East get to this sorry pass where terrorists disrupt the system with constituted authorities seemingly helpless in protecting the lives and properties of citizens?

This is one question to which Nnamdi Kanu and his Indigenous People of Biafra must provide answers. While they are quick to distance themselves from these atrocities anytime they happen, the proscribed group has not done enough to convince keen observers that it has no hand in what has become of the South-East. We hold this view because, despite all that the enforcement of ghost Mondays has cost the South-East and its people, IPOB callously asked people to stay indoors on Friday, October 1, when Nigeria’s National Day is commemorated. That does not in any way show that they care about how their call for civil disobedience is undoing the South-East.

A conversation with an average member of the group or their sympathizers reveals a terrible mindset akin to cutting one’s nose to spite their face. Have these proponents of instability and insecurity considered how they are scaring investments from the South-East and how this will tell on the unemployment figures?

An end to these acts of lawlessness in the South-East. The people of the zone must understand that it is their responsibility to deliver their homestead from terrorists masquerading as freedom fighters. The communism of the Igbo race and their town meetings that exist wherever the Igbo are should be leveraged upon to sensitize the people that there are better ways to realize Ndigbo’s quest for justice and a fairer deal in the Nigerian project. We also believe that this is an opportunity for Nnamdi Kanu to show the kind of leader he is.

Despite being incarcerated, Kanu should without further ado do a video recording to speak senses into members of his group. That he is in detention does not mean he can’t find a way to letting those troubling the peace of the South-East know that enough is enough. This is because his loyalists who go about enforcing the Monday sit-at-home order purportedly revoked by IPOB are quick to say that it is compromised leaders that are rescinding the order.

The political leadership in the South-East, who appear to be fast losing relevance in the region, must do introspection with a view to understanding why the falcon can no longer hear the falconer. We wonder why the Ebube Agu set up by the South-East governors to protect lives and properties of South-East residents cannot rise to the occasion. The Federal Government must not leave the South-East to its devices at this critical moment. Nigeria cannot afford to have the South-East going the way of the North-East. Concerned stakeholders must move to save the South-East now!