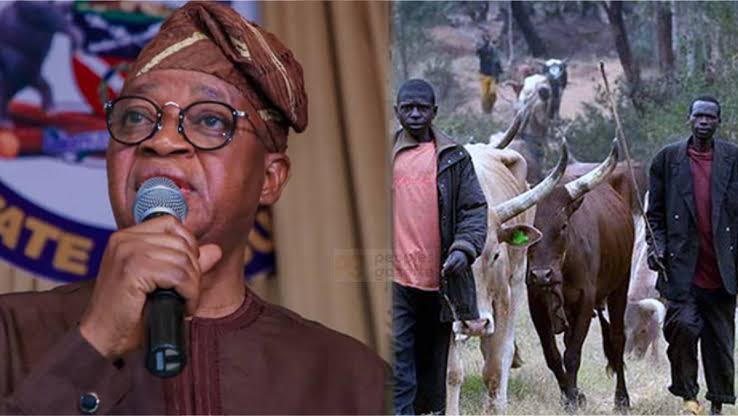 The Osun State Government has revealed that the recently passed anti-open grazing law in Osun State is not meant to witch-hunt or victimize members of the Fulani community in the State.

The government said the law was signed so as to sustain the long standing cordial and peaceful coexistence between farmers and Fulani herdsmen in the State.

The Osun Government made this revelation during a stakeholders’ meeting with the Fulani community in Osogbo on Wednesday.

Speaking at the parley, the Special Adviser to the Governor on Civic Engagement, Olatunbosun Oyintiloye disclosed that the government appreciated the harmonious and cordial relationship that had existed with the Fulani community and promised to do all within its powers to protect and preserve it.

Oyintiloye, who admitted that under the administration of Adegboyega Oyetola, all residents in the state enjoyed equal rights as citizens, stressed that it will not condone tribalism, nepotism and stereotype in running state affairs.

He noted that while herders, who were either Fulani or non-Fulani were at liberty to go about their businesses for socioeconomic development, they must equally conduct themselves within the anti-open grazing law which is the new legal framework.

This, according to him, will help preserve their businesses amongst other laws of the land instituted to engender harmony, peace and stability, as the government was ready to protect the interest of all, irrespective of any ethnic or sectional consideration.

In his remark, the Chairman, Committee on Peaceful Coexistence between Fulani/Bororo and Crop Farmers in the state, Mudasiru Toogun described the law as a legal framework with the intention to regulate the business activities of all herders.

Toogun explained that the intention of the new law is to avert communal clashes and promote and maintain the peaceful coexistence that is in place.

The Seriki Fulani, Ibrahim Babatunde agreed that the new grazing law is one that would serve as a strong protection for their herding business and their entire community.

It will be recalled that the Osun State House of Assembly had on 12th August passed the Bill to regulate animal grazing and establishment of cattle ranches and other related matters.