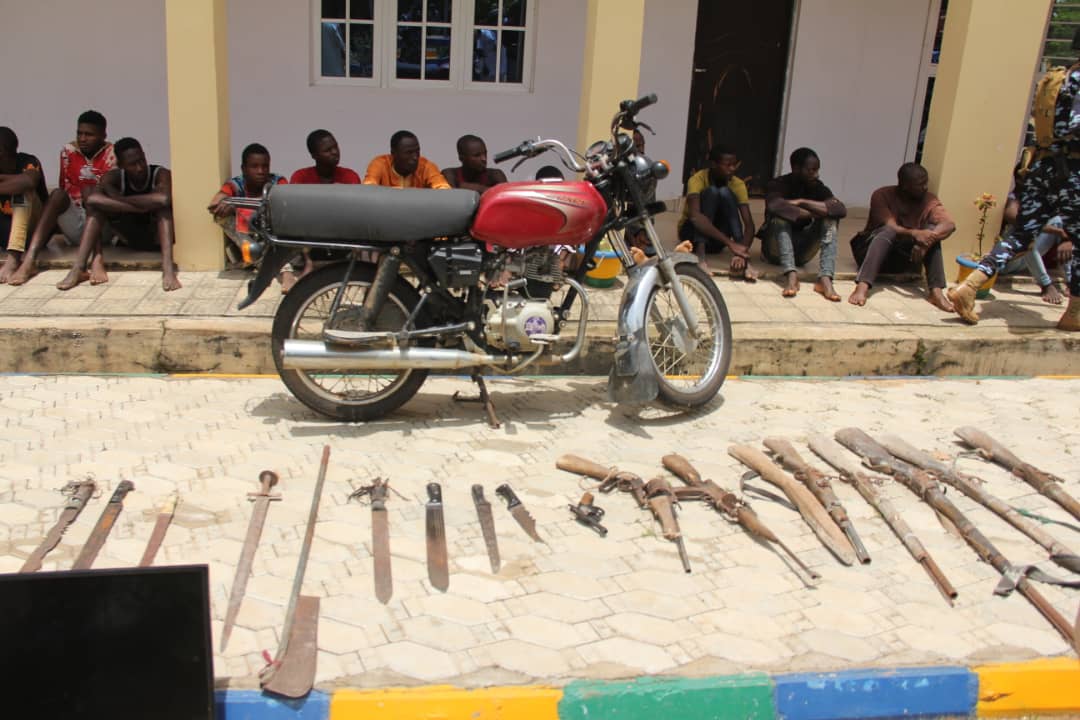 The Bauchi State Police Command has nabbed a fleeing serial kidnapper who fled from Plateau to hide out the state,

The state Commissioner of Police, Sylvester Abiodun Alabi, who disclosed this while briefing journalists in Bauchi said the Command arrested other suspected criminals in parts of the state.

According to the CP, the suspected serial kidnapper, one Sanusi Lauwali, alias No Delay of Gudale village Ningi Local Government Area of the state was arrested based on intelligence.

He informed that the suspect confessed to have fled from Tunga village in Plateau State, where he was at a mining site for two years before moving to Gudale village.

“On preliminary investigation, Sunusi Lauwali confessed to having relocated from Tunga village in Plateau State to Gudale village in Ningi LGA. The suspect revealed that he has been at a mining site of Tunga village for 2yrs where he belonged to a group of criminals who specialised in armed robbery and kidnapping,” Alabi informed.

He named Lauwali’s gang members as one Ali and one Bammi
Welcome (real name not yet known).

“The suspect Sunusi Lauwali confessed his involvement in some kidnapping and armed robbery activities around Dabbar Tsintsiya and Tunga villages in Plateau State and confirmed to have benefitted the sum of two hundred and fifty thousand naira (N250, 000) as his share from the proceed of crime they collected from their kidnapped victim at Dabar Tsintsiya village.”

The police chief said an investigation was being expanded to nail the fleeing accomplices.

In a related development, CP Alabi informed that two other kidnappers who demanded and collected the sum of N1,200,000 as ransom from a man they shot and kidnapped his two wives, were arrested following information volunteered to the police by a good Samaritan.

The suspected kidnappers, Ibrahim Adamu (25) and Musa Musa, also known as Nature (45), conspired with others now at large and attacked one Alhaji Abdullahi Abdullahi, a resident of Magama Gari in Toro LGA, shot him and kidnapped his two wives and later collected the ransom of N1.2 million.

“On 03/09/2021 at about 2330hrs information received from a good Samaritan with sustained efforts coupled with intelligence led to the arrest of one Ibrahim Adamu aged 25yrs of Kwanar Malam Tukur village, Jos North LGA Plateau State and one Musa Musa, alias Bature, aged 45yrs of Sabon Garin Narabi Toro LGA, where they criminally conspired with the following persons; Buhari Mahanga, Isah Magama, Yellow Magama now at large stormed the house of
one Alhaji Abdullahi Abdullahi aged 45yrs of Magama Gari, Toro LGA shot him and kidnapped his two wives to an unknown destination.

“Thereafter, demanded and collected the sum of one million, two hundred thousand (1,200,000) naira as ransom.

“During the course of interrogation, the suspect voluntarily confessed to the crime. An investigation is ongoing, after which the suspects will be charged to court for prosecution,” the CP informed.

The police boss said a combined team of police and hunters arrested one Mohammed Aliyu (21) and Umar Jibrin (20), both of who conspired with others to kidnap one Danfulani Sabo, demanded and collected N500,000 as ransom before their victim was released.

Alabi revealed that as of the time of their arrest, the total sum of N106,240 was found in the suspects’ possession as proceed of crime to which they confessed.

“On the 13/09/2021 at about 1830hrs through a joint operation by the police and hunters group arrested the following: Mohammed Aliyu 21yrs, Umar Jibrin 20yrs, who conspired with one Aliyu Mahmud and Sadiq Bappaji and stormed the house of one Danfulani sabo of Tudun Wada village, Toro LGA, kidnapped him to an unknown destination, demanded and collected the sum of five hundred thousand naira (N500, 000) as ransom before his release.

“The suspects were apprehended with the sum of one hundred and six thousand, two hundred and forty naira (N106,240) in their possession as proceed of crime which they confessed to.

The CP, however, disclosed that investigation was in progress after which the suspects would be charged to court to face prosecution.

Alabi said it was obvious that the command had not been resting on its oars in the areas of crime, working towards ensuring adequate peace and security in Bauchi and environs.