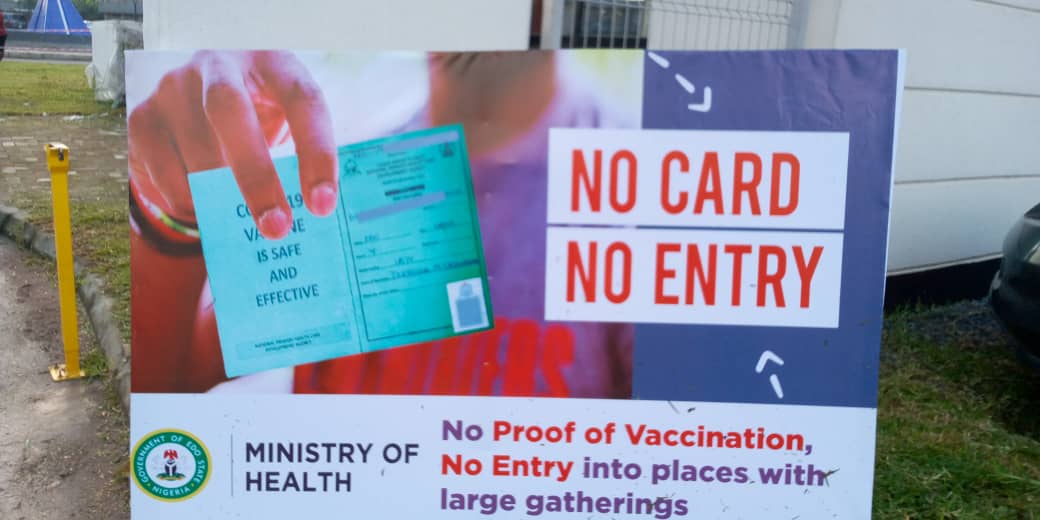 Governor Godwin Obaseki of Edo State has carried out his threat to bar civil servants who are yet to receive COVID-19 vaccine from their place of work.

Obaseki had declared that starting from the second week of September, people in the state will be required to show their COVID-19 vaccination cards before gaining access to public spaces.

Following the directive, a group went to court, seeking to restrain the government from carrying out its threat.

On Wednesday observed that Edo Jobs, an agency of the State Government, became the first to receive the hammer of the governor.

Despite widespread rejection of the new policy, Governor Obaseki has refused to shift ground.

As Obaseki becomes the first governor to enforce the policy, health officials and security personnel were stationed at the entrances of different ministries in Benin, the state capital, enforcing the order.

A source revealed that the majority of the staff of EdoJobs refused to take the COVID-19 vaccine, hence the shut down.

Among government offices visited by our correspondent, EdoJobs office in the Government House seem to be almost deserted.

Speaking to a government official on if Obaseki may sanction workers who refuse to get vaccinated and return to work, he said not such measure has been announced yet.

“It is obvious the governor is serious about enforcing this new policy, though controversial, he had refused to shift ground.

“We however don’t know if he would introduce further sanctions on civil servants that refuse to get inoculated,” the government official said.

Photos of empty offices after government agents chased out workers: Recall that in a statement on Tuesday, the Permanent Secretary, Edo State Ministry of Health, Osamwonyi Irowa, had said the government with effect from today, September 15, 2021, will commence the enforcement of the “no vaccination card, no access to public places” policy.

According to Irowa, all those who are yet to take the COVID-19 vaccine will be barred from accessing public places.

Irowa said the government had trained 20 special teams that will enforce the policy across the 18 Local Government Areas of the state.

The statement reads: “Beginning from September 15, Civil servants and others without COVID-19 vaccination cards will not be allowed into public facilities. Government House and public places will be manned by the task force.

“Those civil servants without the cards and those who have not vaccinated will have to stay and work from home. This will be applicable in the 18 local government areas of the state.

“The government is not forcing anyone to take the vaccine but if you don’t have the vaccination card you can’t access our public facilities.”