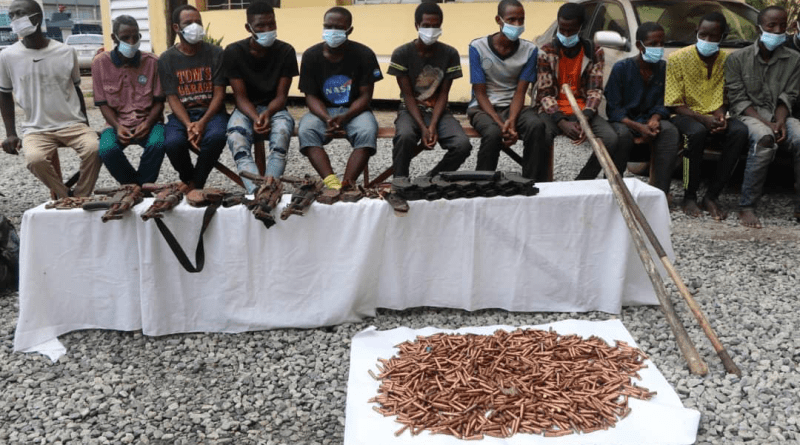 The Federal Capital Territory (FCT) Police Command, have arrested a notorious kidnap gang who have been terrorizing residents of the city and recovered 2 AK47 rifles and 60 rounds of live ammunition.

The six member gang, according to the police commissioner Sunday Babaji, are responsible fir the kidnap cases around Kwali in the FCT. They were arrested by operatives from Dawaki Police Division, following intelligence report and found to be in possession of deadly weapons.

Parading the suspects before newsmen at the commands headquarters in Abuja, the Commissioner said acting of a tip-off, operatives from Dawaki Police Division, arrested one Danjuma Mohammed 38, in possession of the deadly weapons. The police also arrested Yahaya Musa, 47, and Shagari Ahmadu, 42, who are members of the same syndicate which specialised in kidnapping their victims for ransom around the Bwari/ Kwali axis of the FCT.

“The suspects will be arraigned in court upon the conclusion of the investigation.”

The police commissioner who gave a breakdown of police achievements in the FCT, said
“Similarly, in another clearance operation carried out at a suspected kidnappers camp by the command’s Anti-violence Crime section along the Kwaita-Kwali axis,1,600 live ammunition and 15 empty magazines were recovered.

According to the CP, on August 27, the Anti-car theft section arrested one David Friday, 25, and his accomplice, Moses Benjamin, 34, for stealing a Toyota Corolla Car at Goza Market, Airport Road.

Preliminary investigation revealed that the car belonged to his employer but the suspect allegedly fabricated a spare key which he handed over to his accomplice who stole the said car from where it was parked. The car has been recovered.

“In another development, on 5th September 2021 eagle-eyed operatives from Mabushi Division while on stop and search arrested one Confidence David 24 years and Charles Courage 20 years suspected to be cultists.

A locally made pistol was found in their possession. Meanwhile one of the suspects, Confidence David confessed to being a member of the Vikings confraternity.

The suspects will be arraigned in court upon the conclusion of the investigation.

The suspect will be handed over to the NDLEA upon the conclusion of the investigation.

Acting on a tip-off, Police operatives from Bwari Division, foiled a kidnap attempt on 27th August 2021 by one Nyale Kachia, Sani Damina, and Yusuf Samaila all adults. The suspects, who confessed to the crime, were arrested while trying to kidnap their victim who is an uncle to Nyale Kachia, one of the suspects, along the Bwari axis of the FCT.

Exhibits recovered from the suspects include one (1) machete and two (2) sticks.

Relatedly, on 3rd September 2021 police Operatives from the Command’s anti-kidnapping section arrested one Salihu Musa 30 years along the kali axis of the FCT. The suspect, who confessed to being a supplier of food items and drugs to kidnappers along kwali axis was arrested while trying to supply the said items to kidnappers.

Again, on 22nd August 2021 Police operatives from karshi Division arrested a kidnapping syndicate that specialises in staging the kidnap of members of their families and demanding ransom. The suspects Adamu jibrin 37 years, Mohammed Dahiru Husseini 38 years, and Abubakar Ya’u 35 years confessed to the crime and were arrested at Karshi axis of the FCT. Investigation revealed that they threatened to kidnap a brother to Adamu Jibrin and collected Ransome of seven hundred and fifty thousand nairas (N750,000) in order for him not to be kidnapped.

The suspects will be charged to court upon the conclusion of the investigation.