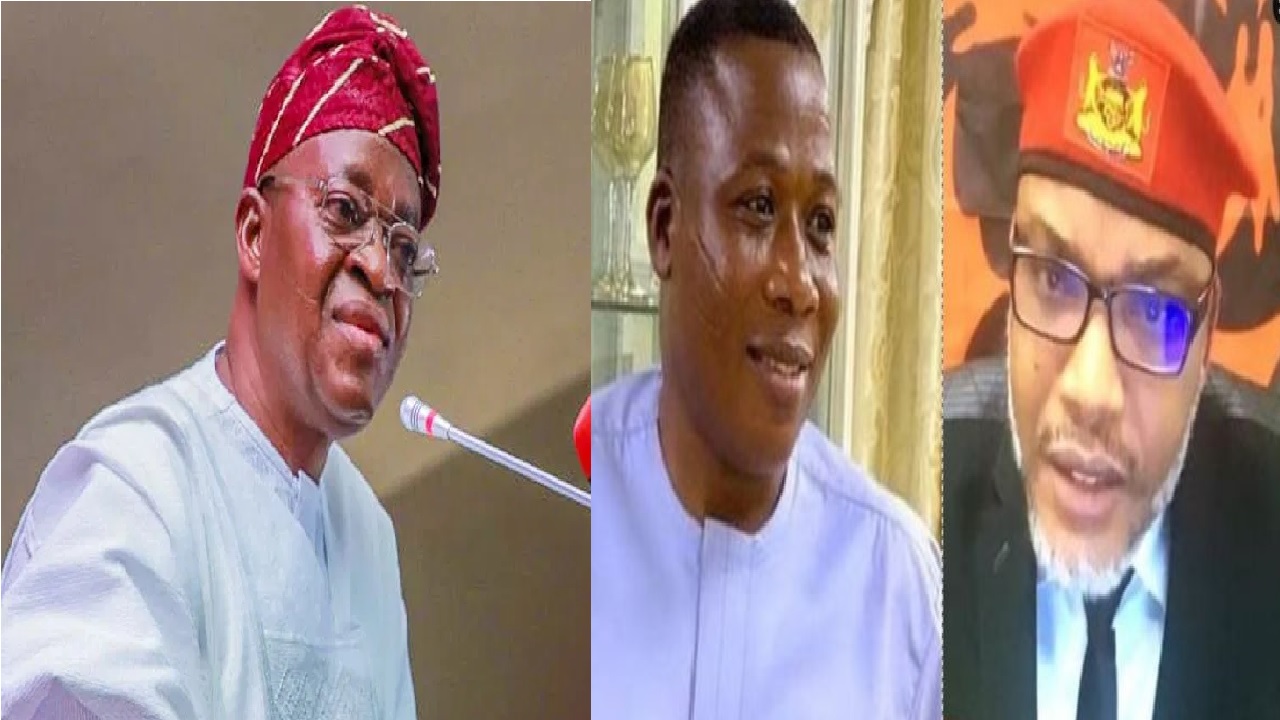 Osun State Governor, Gboyega Oyetola, has said the Yoruba Freedom Fighting, Sunday Adeyemo, popularly known as Sunday Igboho and others agitating for a Yoruba Nation and the Biafra Republic as “unserious” people.
The governor disclosed this on Sunday as a guest at the News Agency of Nigeria (NAN) forum, the flagship interview platform of the NAN, The Peoples Gazette reports.

Sunday Igboho and Nnamdi Kanu were the ring leaders demand for a separate and independent Yoruba Nation and the Biafra Republic from Nigeria.

Igboho was resisting the tyranny of Fulani herdsmen against his people in the South West region, the region where one of the states that Governor Oyetola governed.

Newsflash Nigeria had earlier reported that the Department of State Services, DSS, had on July 1, 2021, attacked the Ibadan home of the Sunday Igboho, killing two people and arresting 12 others.

The Yoruba activist who escaped the attack by the security agency went into hiding but later resurfaced in Cotonou, Benin Republic.

Igboho alongside his wife, Ropo, were apprehended by Beninese security agents while they were trying to board a flight to Germany.

Though Ropo was later released by a Beninese court, the judge ordered Sunday Igboho to be remanded in prison as they carry out further investigation.

Nnmadi Kanu, who proscribed Indigenous People of Biafra (IPOB) from Nigeria was first arrested in 2015 on charges bordering on terrorism, treasonable felony, and managing an unlawful society.

Other allegations levelled against him by the government were the publication of defamatory matters, illegal possession of firearms, and improper importation of goods, among others.

The IPOB leader was initially detained and arraigned in court, but he fled the country in 2017 after he was granted bail for medical reasons.

While he was away, he was sighted in Israel and had continued to rally his supporters in Nigeria to achieve the secession of a significant part of Nigeria’s southern region to form the Republic of Biafra.

About four years since he jumped bail, Kanu was intercepted on June 27 and repatriated to Nigeria in an operation conducted by Nigerian security operatives in collaboration with international partners, to face the charges for which he was arrested.

But the Governor Gboyega Oyetola of Osun state has described those agitating for a Yoruba Nation and the Biafra Republic as “unserious” people.

The governor, who says he was not for the breakup of Nigeria, was a guest on Sunday at the NAN Forum.

He says he believes in the economic restructuring of Nigeria, for more economic and political powers to get to state governments, rather than a total breakup of the country.

“What I believe in is that for us to live together as a people, every unit of the enclave should have rights and responsibilities clearly defined. To me, restructuring does not mean that people should separate. Whoever is thinking along that line is not serious,” he said.

“We have come a long way, and it is the togetherness that can make us get to where we are supposed to be within the space in the world.

Mr Oyetola said the world’s poverty capital “have all the resources to be great”, and asked that Nigerians not focus on fault lines, “rather let’s look at what binds us together.”

The number one citizen in Osun said rather than stakeholders give in to calls for the country’s breakup, his state and the other 36 state governments that make up Nigeria should get more powers.

“I believe in devolution of power to the states, let the states have more power to do most of the things they have been doing.

“Give the states more support, and I believe we should look at the issue of revenue allocation. We should allow the states to have more funds to develop some of the things they have,” Mr Oyetola said.

In recent years, stakeholders have called for Nigeria to restructure to address the glaring lopsidedness in the system and ensure equity, justice and fair play in the country.

Former colonial power Britain amalgamated ethnic nationalities 107 years ago to give birth to Africa’s largest nation. The arrangement, however, appears to have raised many problems that are endlessly tearing the country apart.