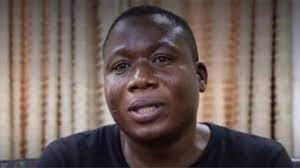 Returning to Nigeria for Yoruba nation agitator, Sunday Adeyemo aka Sunday Igboho, will be very dangerous because his life is under threat.

This was made known by Olusegun Falola, one of the lawyers of the activist.

In an interview with feelrightnewsTV, Falola, a citizen of Benin Republic, stated that Sunday Igboho might not return to the country in a long time.

He said: “When I arrived from Paris at the custody where Igboho was detained, he was first chained. They were scared that he could just disappear into the thin air because of his mystical powers.

“The police told me that if Igboho’s chains were untied and he escapes mysteriously, he (police officer) will be stripped of his rank and also dismissed.

According to Falola, it took his timely intervention for the officers to unchain him and allow him (Igboho) walk freely.

The lawyer assured that Sunday Igboho is very safe in Benin Republic.

The Beninese accused the Nigerian government of planning to kill the Yoruba activist.

He said: “The case will make revelations as to which government is powerful in Africa, our government may not be wealthy, and not much in population as compared to Nigeria but there is a signed treaty that must be respected.

“Igboho cannot be left to return back to Nigeria for now because of the destruction of his properties that was witnessed, they are not looking for Sunday Igboho alone but planning to kill him.

“They are looking for how to kill him and that’s very dangerous to allow him return back to Nigeria. So he is being kept safe in custody.”

He said Sunday Igboho’s case has become a global one with many watching the developments.

“All Yorubas especially in Diaspora, monarchs, traditionalists, others are keenly following the case,” Falola stated