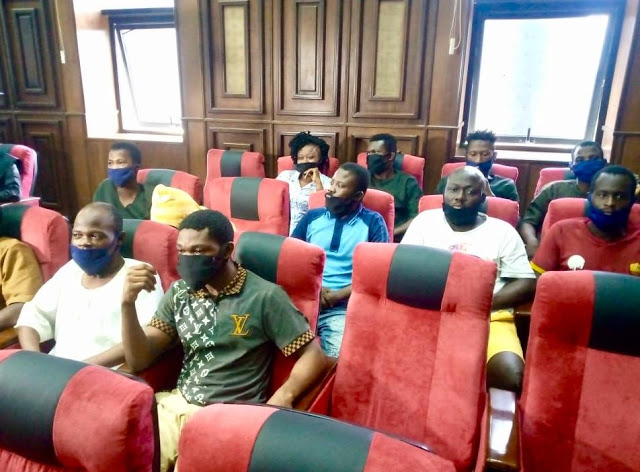 A federal high court in Abuja has granted bail to 12 supporters of Sunday Igboho who were arrested in Oyo state.

Operatives of the Department of State Services (DSS) had on July 1 raided Igboho’s residence in Oyo and arrested 12 of his supporters. Two persons were killed in the raid.

The arrested persons were subsequently moved to the federal capital territory (FCT) where they have been in detention.

Subsequently, the suspects through their lawyer, Pelumi Olajengbesi, filed an application asking the court to “inquire into the circumstances constituting grounds of their arrest and detention since July 2, 2021, and where it deems fit admit applicants on bail”.

At the resumed hearing on Wednesday, Olajengbesi, counsel to the applicants, asked the court to admit his clients to bail.

“There is no need to continue to keep them with the respondents,” he said.

Commenting on the bail application, DSS counsel, David Awo, had said he was not opposed to bail for the 3rd, 4th, 7th, 8th, 9th, and 11th applicants.

He told the court that the remaining four applicants (2nd, 12th, 5th, and 6th) were still being investigated.

Ruling on the bail application, the presiding judge, Obiora Egwatu, said it is clear that no charge has been preferred against the applicants and that they have been in detention since they were arrested.

He said the applicants have a right to liberty and the presumption of innocence until proven guilty.

The judge said the sureties must be residents of Abuja with an acceptable means of identification and passport photographs. They must also provide evidence of tax payment of two years and swear to an affidavit of means. The residence of the sureties shall also be verified by the court.

“For the 2nd, 5th, 6th and 12 applicants, since no charge has been preferred against them, bail is equally granted to them in the sum of N10 million and two sureties in like sum,” the judge ruled.

“The sureties shall be resident in Abuja, provide means of identification, passport photograph, evidence of tax payment within 2 years and depose to an affidavit of means.

“One of the surety must be a civil servant in the employ of the federal government or any of its agencies on level 12 and above. He shall provide the original of his employment letter and promotion letter. The residence of the sureties shall be verified.

“Each of the 3rd, 4th, 7th, 8th, 9th and 11th applicants, shall report at the office of the respondents every first Monday the month, commencing from the first Monday in September 2021.”

Meanwhile, a high court in Ibadan, Oyo state has granted an ex-parte motion restraining the DSS and attorney-general of the federation from arresting, intimidating, harassing, and blocking bank accounts of Sunday Igboho”.

The judge, Ladiean Akintola, granted the order on Wednesday following an ex-parte motion moved by Igboho’s lawyer, Yomi Aliu, at the court.

Igboho and his wife were arrested at Cadjèhoun Airport in Cotonou on their way to Germany.

Ropo, the wife, was released after the pair were arraigned before a court in the country, but Igboho remains in custody after extradition hearing on the request of the Nigerian government was stalled.

He had fled Nigeria after the raid on his home by operatives of the DSS.

Igboho had through his lawyer sued the AGF and the DSS claiming damages worth N5.5 billion over alleged violation his fundamental human rights.

The ex-parte application moved on Wednesday is a part of the substantive suit.

Hearing in the suit was adjourned till August 18