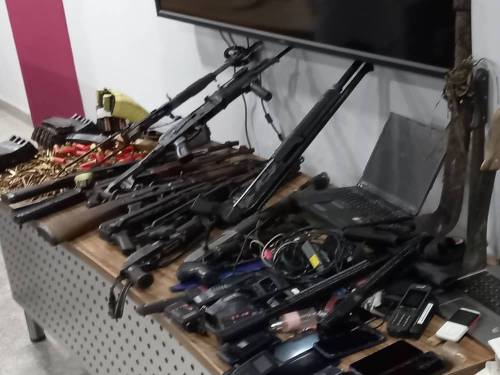 Yoruba rights activist, Sunday Adeyemo, also known as Sunday Igboho, has claimed that the arms paraded by the Department of State Service don’t belong to him.

Igboho in a statement by his spokesperson, Olayemi Koiki, on Friday, said that such arms do not exist in his house.

The spokesperson for DSS, Peter Afunaya, had said that seven AK-47 rifles were recovered, alongside pump action guns and 5,000 rounds of ammunition, including other weapons, were recovered when DSS raided Igboho’s house, in Soka, Ibadan, Oyo State around 1:00 a.m. on Thursday.

But the Yoruba Nation agitator said the security operatives who invaded his home “either planted the ammunitions being paraded in the media in my home or harvested them from their armoury to frame me. The arms paraded are not mine, they are government magic. I protect myself with traditional powers, not with guns.

“Federal government framed me up and the sequence of events brings the truth bare. Why would the security agents invade my home at night and destroy my surveillance cameras before carrying out their operation if not that they had an ulterior motive?

“In this modern age of technological advancement, why did the security operatives not put on body cameras to record their activities from the point of entry to their time of exit? Their action is a testament that the Buhari regime is incapable of using desperate approaches to silence peaceful social interventions.”