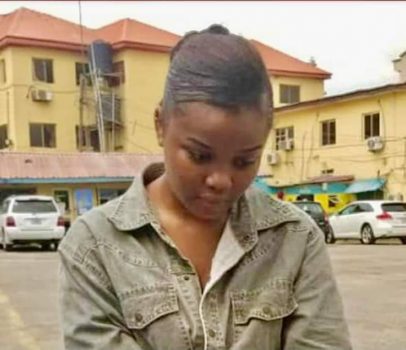 On Saturday, the 21-year-old undergraduate said she started smoking and dealing with drugs after she gained admission to study Mass Communication at the University of Lagos (UNILAG).

She also confirmed she’s the person in a trending video showing a lady puffing out cigarette smoke while soft music plays in the background.

She said: “I started smoking after I got into UNILAG.”

“I am the one smoking in the trending video. I started smoking a few years ago. Old-time friends introduced me to it and we don’t talk anymore. Everything started after I entered UNILAG, but not actually when I am in school, it could be other places. But I am not the one in the other video (dissociating herself from another trending video showing a lady exhibiting her butt),” she added.

Speaking about her childhood, she said her parents separated when she was two years old and she started living with her uncle in the Mushin area of Lagos State.

The suspect added that while growing up, her childhood ambition was to become either a musician or an actress.

She said “My role models were Tiwa Savage, Beyonce, Rihanna, Genevieve, and Regina Hall. I schooled in Johnson Primary School and also a government primary school in Mushin. I later went to Sidman College in Sabo, Yaba. I was two-year-old when my parents separated, I was little, so while I was growing up, I stayed with my uncle, Mr Chijioke Obi, in Mushin. I don’t know if he bears Izu, but it was my uncle that trained me.”

Narrating her relationship with Ataga, Chidinma described him as just a friend she met a few months back.

She also faulted claims that the late billionaire neither took hard drugs nor alcohol.

Ojukwu|e said, “Mr Ataga was a friend and I don’t know how to elaborate more. He has not shown me pictures of his family but he sometimes acts like he was married and not that he is married (sic). I have met him up to four or five times; he takes drugs and drinks alcohol. It is not that I am trying to put anything together.’’