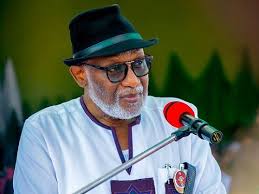 Governor Rotimi Akeredolu of Ondo State has dismissed reported that he called for the scrapping of the Nigerian Senate in the review of the 1999 constitution currently being undertaken by the National Assembly.

Akeredolu, who was represented by his Deputy, Lucky Aiyedatiwa, reportedly called for the scrapping at the House of Representatives public hearing on the review of the 1999 constitution.

“The membership of the Assembly should be part-time. No member should earn allowances not known to the Revenue Mobilisation and Allocation Committee, and the people they claim to serve.

“Legislators should earn under a uniform salary structure. Allowance peculiarities must not be about obscenity. The Senate should be scrapped.

“The House of Representatives too should not be unwieldy. A maximum of four representatives should come from each Zone,” he reportedly said.

But in statement by his Commissioner for Information and Orientation, Donald Ojogo, Akeredolu clarified that the report quoting him as calling for the scrapping of the Senate as an “interpretative error.”

The Ondo Governor said he had, like many other well-meaning Nigerians, identified Nigeria’s Bicameral Legislature and its full-time status as plausibly reducible weights to cut cost.

He said: “Succinctly, Governor Akeredolu’s view, which is the official position of the Ondo State Government is that, adoption of the Unicameral Legislature, and making it part-time would not only cut cost of governance but has the potentials of enhanced performance and altruistic services to Nigerians.

“Therefore, ascribing or misinterpreting this proposal to isolatedly, depict a call for the scraping of the Nigerian Senate is erroneous. The call for a part-time Unicameral Federal Parliament remains and shall be pursued with all vigour.”