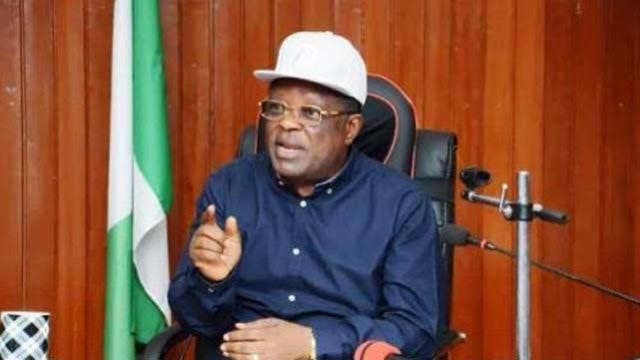 The Governor of Ebonyi State, David Umahi, has made a U-turn over the sit-at-home order by the leader of the Indigenous People of Biafra, Nnamdi Kanu.

Umahi charged the people of the state who wished to stay indoors on Monday (today) not to be afraid to do so, saying that they would not be penalised.

Recall that the Governor had earlier said anyone who fails to open their shops on Monday will be penalised and their stores will be forfeited.

He said, “On Monday, the market must be operational. Any trader that refuses open will forfeit his or her store.”

However, in a twist, Umahi who noted that it was the constitutional right of any person to remain at home anytime, said it is also the wish of anyone to go about their businesses.

Umahi stated this in a statement released through his Special Adviser on Media, Francis Nwaze, which was released in Abakaliki.

The statement reads, “The Government of Ebonyi State received several requests from some families and residents requesting that they would like to remain indoors on Monday, May 31, 2021, to organise private family prayers in honour of their loved ones who were murdered during the unfortunate civil war.

“Following the foregoing, the Governor, David Nweze Umahi, who is highly in touch with the people, has directed that those who may wish to remain at home with their shop(s) locked should neither be penalised, nor their shop(s) seized as it is their constitutional right while the rights of those who may wish to go about their normal businesses should not be infringed upon as it is equally their constitutional right.”