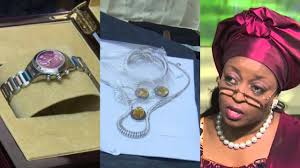 The Chairman of the Economic and Financial Crimes Commission (EFCC), Abdulrasheed Bawa, says the jewelry forfeited by the former Minister of Petroleum Resources Diezani Alison-Madueke is worth N14.4 billion.

The EFCC chairman made this known on Friday when he appeared before the House of Representatives ad-hoc committee investigating the assessment and status of recovered loot.

He said the “jewelry forfeited from the former minister has been valued by relevant government agencies and the estimated value of the jewellery is 14.4 billion naira.”

Bawa also noted that the estimated value of the houses seized and forfeited from Diezani is $80 million. The anti-graft boss stated that the assets are in the custody of the commission and have not been sold.

The House of Reps committee is assessing the status of all recovered loot moveable and immovable assets from 2002-2020 by agencies of government.

Justice Nicholas Oweibo ruled that the former minister had failed to show cause why the jewelry should not be forfeited to the Nigerian government.

In his application for the final forfeiture order, Counsel to the commission Rotimi Oyedepo had told the judge that the expensive jewellery comprising wristwatches, necklaces, bracelets, bangles, earrings, a customized gold phone, and more were reasonably suspected to have been acquired with proceeds of unlawful activities of the former minister.

Earlier this year, the EFCC handed a property forfeited by the former minister to the Lagos Government for use as an isolation centre for COVID-19 patients.

The six flats of three bedrooms and a boys’ quarter had been forfeited to the Federal Government, following an order of a Federal High Court in Lagos in 2017.