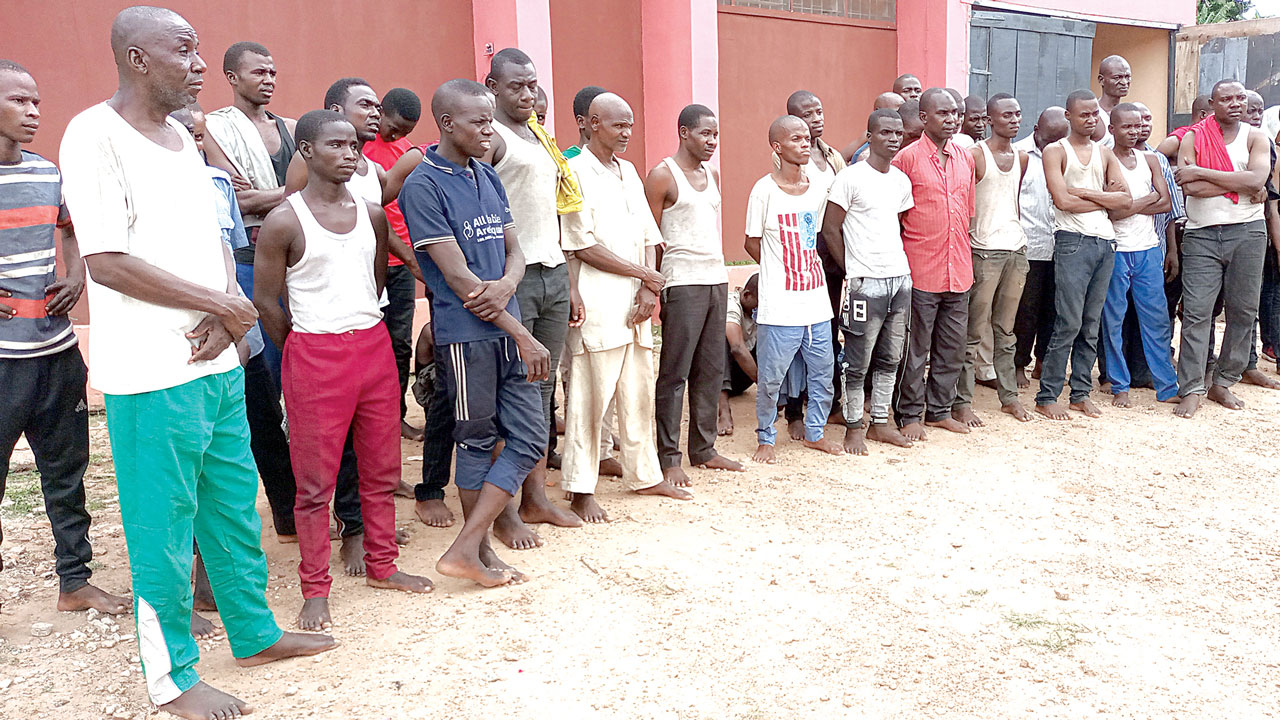 Thursday, April 29, would, no doubt, remain a day to remember in 2021 by residents of Ondo State. That was the day the social media went agog with tales of Fulani invaders intercepted at the 19 Battalion Army Barracks, Okitipupa, a major town in the state.

It started like a flicker of fire but soon snowballed into a huge conflagration, sending jitters down the spines of residents and their relatives abroad. It spread rapidly as fingers started pointing beyond state boundaries, provoking reactions and denials.

Authors and promoters of the story claimed that influential personalities of northern origin, backed by Federal Government, were behind the arrival of the Fulani youths to pave the way for Fulani conquest of the Southwest region, using Okitipupa as the springboard.

The Fulani youths, it was alleged, were being trained at the barracks for the imminent attack.

To give credence to their claim, the authors of the story quoted an unnamed top security source as saying that security operatives could not harass the migrants because the Federal Government ordered the military, police and DSS not to do so.

The tension generated by the tales was heightened by a fresh alarm raised by a group, Nigeria Indigenous Nationalities Alliance for Self-Determination (NINAS in a statement issued by its secretariat. The statement, dated May 1, 2021, accused the FG of using military bases to launch Fulani conquest across the country. The group cited the Okitipupa case.

Giving yet another account of the Okitipupa incident in a 14-minute audio message, Chief Akin Ogeleyinbo, who described himself as a native of the area, went viral on the social media the following morning, Friday, April 30, 2021, intensifying panic across the state.

Ogeleyinbo claimed that over 3,000 Fulanis, armed with guns and other dangerous weapons from northern part of the country, had infiltrated the town and were quartered in Army barracks.

He said: “When we enquired about their mission, they said they belonged to World Security Agency. They said they had undergone training, acquired certificates and were posted by government.

“Immediately they arrived, they went to the army barracks but soldiers did not allow them to enter. But few hours later, the soldiers received a call and they were allowed to enter the barracks. They were not allowed to go in with their cars, the buses were parked outside; they entered carrying their loads on their heads.”

He alleged that Fulani migrants had not only taken over Okitipupa and its environs, but were also found around Ilaje, Apoi, Ijawa and other communities.

Ogeleyinbo stressed the need for the Yoruba to form a force against Fulani invasion.

SIMILARLY, another resident and legal practitioner, Wale Odusola, claimed that more than 4,000 Fulani/Hausa natives had taken over Okitipupa.

Odusola, who lives close to the barracks, said: “Apart from saying they are members of an unknown security network, they have no other reason for coming into Okitipupa in that large number. As a matter of fact, they are about 1,000 in number and if they are added to the existing numbers, we will be having about 4,000 Fulani/Hausa in Okitipupa.

When The Guardian got in touch with Odusola at his chamber in Okitipupa, he also accused government, monarchs and security agencies of insincerity in the way they handled the matter, alleging that they were playing politics with lives of the people.

He accused leaders of not telling the truth “because of politics and whatever reasons best known to them.”

To douse tension, the state government, through its security outfit, Amotekun, arrested the controversial migrants and sent them back to their places of origin in Kano and Jigawa states.

BUT the Chairman of Okitipupa LGA, Mr. Igbekele Akinrinwa, said the story was fabricated to deceive the people and raise tension in the state, even as he commended the Army, Police, SSS, NSCDC, Amotekun and hunters for ensuring restoration of peace.

Akinrinwa said the Fulani youths were quizzed and “they explained to us that they are members of a corps, Global Harmony Corps. They have a coordinator here in Okitipupa Local Government, Mr. Emmanuel Fafoluyi, who was also there with them. Also, they said they have state coordinator in Akure, a woman, and they have national coordinator in Abuja.

“They claimed to have contributed some money to facilitate their training for some months now. This time they have a training in the Army Barracks, Okitipupa.”

According to him, the officer in charge of Okitipupa barracks, Captain AI Balla was not given any order, as alleged, to accommodate any visitor.

“So he denied them entry into the barracks. They were said to be 56 on arrival but feelers had it that some Yoruba and other tribes who came with them left immediately to avoid being arrested.

“Some of them came from Lagos and Anambra but most of them are from the northern part of the country,” he said, revealing that they were moved to Amotekun offices in Okitipupa and Akure respectively.

He urged the public to ignore the story by Ogeleyinbo.

He explained that an NGO brought them Okitipupa to train as security guards.

THE Jegun of Idepe-Okitipupa, Oba Michael Obatuga Adetoye, urged the people not to take the audio message seriously, describing Ogeleyinbo as an attention seeker. He noted that the movement of the youths to the town was true but blown out of proportion.

Oba Adetoye said the story of Fulani invasion is not the correct version but attributed the misconception to the challenges Nigerians are facing in the country at the moment due to the penetration of the Fulani herdsmen and recurring clashes with farmers.

He said: “They were taken to Amotekun office, they searched their bags and there was nothing incriminating there. The whole thing amounted to the fact that those people were being scammed by some people, including one of our own here, a boy called Fafoluyi. He is the one organising the whole thing here.

“He was not properly briefed too. Later on, he came to meet me and explained how everything went,” he said, dismissing the audio message by Ogeleyinbo as spurious.”

The monarch debunked the allegation that traditional council was lagging in security matters, and said there had been tight surveillance on the forests in the area.

REACTING to the conspiracy theory against the police, the state Police Public Relations Officer (PPRO), Mr. Tee-Leo Ikoro, denied the allegations, dismissing it was rumour.

The Guardian learnt from some of the soldiers, during the two-time visits to 19 Battalion Barracks, Okitipupa, that the visitors did not enter the premises, just as the Commanding Officer, Captain Al Ballal, said he was not authorised to speak on the matter.

Also, the state Public Relations Officer (PRO), 32 Artillery Brigade, Nigerian Army, Owena Cantonment, Akure, Captain Ayorinde Omojokun, denied knowledge of the alleged invasion, saying he was not aware of the video that went viral about the arrest of the NGO coordinator in Delta State, while the Director of the State Security Service (SSS), Akure Office, Mr. Rasheed Adediran, refused to attend to enquiries.

A member of the NGO, Harmony Corps, disclosed that they were victims of some fraudulent people who contacted them to organise training for youths selected from nine states across the federation.

He recounted that it was officials of the Department of State Security Service (DSS) in Ondo State who foiled the plot, and took steps that led to the arrest of the ringleader and syndicate in Asaba, Delta State.

Revealing how they fell victims of the scam, he mentioned that some persons who claimed to be consultants to an oil company, Eagle Eye, approached Harmony Corps to help in the recruitment of young men who would be employed by an oil company to protect and secure its facilities.

“The money was paid into the personal account of one Desmond who collected all the data of the interested youths, who claimed it would be imputed to card reader for easy access. They directed the youths from Lagos, Ondo, Osun, Delta, Kano, Cross River, Anambra, Jigawa, and Imo to come to Ondo State for the training. But the Kano and Jigawa youths came earlier because of their distance.

“They lied to us that letters had been sent to all the security agencies in the state concerning the training in Ondo State only for us to find out at the last minute that it was not true, but the youths from Kano and Jigawa states had already arrived.

“But it was late before we found out that the men had scammed us and we could not halt the young men as they had arrived at the Army Barracks where they said the training would take place. It was this development that helped to throw more light on the activities of the scammers while those behind the scam were investigated.”

This, according to him, led to the arrest of syndicate leader in Delta State through the DSS intelligence gathering, warning the members of the public to beware of such moves to dupe unsuspecting job seekers. He noted that the dubious job placement was published same way real companies handle recruitment.

Recounting their experiences in the hands of the conmen, two of the 42 victims, Abubakar AbdulAziz and Muthar Hassan, said: “We learnt there was an oil firm that was going to recruit us for security purpose. We were here for two weeks training as security personnel for an oil company. When we were caught, the Amotekun operatives treated us nicely.

“They gave us food and they never manhandled us. We are ready to go back to our states,” Hassan said, while the NGO Head, Mrs Elizabeth Omini, told journalists that Ondo State is not the only state the organisation has engaged in such exercise.

“We are just victims of scammers. Two months ago a company contacted me that there was an agency working with an oil firm in need of 600 security personnel,” Omini said.

Reacting in a statewide broadcast, seven days after, Governor Akeredolu dismissed the 3,000 Fulani in Okitipupa story as untrue, blaming it on irresponsible use of the social media.

“The recent issue which dominated the social media and the media space of some Fulani men being trained at the Army Barracks, Okitipupa has been investigated by security agencies and found to be false. We can confirm to our good people that there are no 3,000 Fulani men resident in Army Barracks in Okitipupa. It is, therefore, preposterous for anyone to presume that the information was true.”