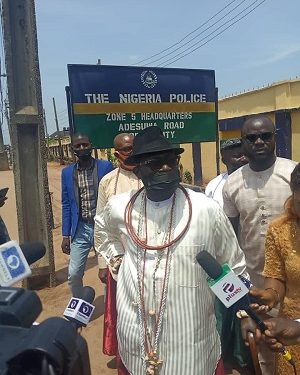 There was a mild drama at the Zone ‘5’ Headquarters of the Nigeria Police Force yesterday where the Ologbotsere of Warri Kingdom, Chief Ayiri Emami, was interrogated in respect of the invasion of the Olu Palace in Warri, Delta State.

It was learnt that Chief Emami took the police by surprise as he stormed the station three days earlier than expected.

“The Ologbotsere arrived here on Friday (yesterday) and we were not expecting him. The Deputy Commissioner of Police, Criminal Investigation Department (CID), Mr Polycarp Dibia, who led the interrogation, told him so,” a source at ZCID said.

“He got here (police headquarters) at about 1100hr today (yesterday) and he was with us for about three hours,” the source added.

The letter stated that the invitation was over a case of “burglary, stealing and conduct likely to cause a breach of the peace”.

It was, however, gathered that Chief Emami’s decision to honour the invitation earlier was to avoid possible embarrassment and detention on Monday, which coincides with his 46th birthday anniversary.

“We know the plan of those behind the petition. It is simply to embarrass the Ologbotsere and drag his name to the mud. It is also not beyond them to try to ensure that he is detained on his birthday because they want to score a cheap point,” an associate told our reporter.

Details of the meeting between the Itsekiri chief and ZCID officials revealed that the Ologbotsere denied involvement in the invasion of the Olu’s palace.

“He said he knows nothing about the invasion and that he was out of the state when the incident occurred.

“He said, ‘I left the palace and everything there intact with the son of the late Olu of Warri, Prince Oyowoli.’”

Our source further revealed that Emami fingered a very high ranking chief in the kingdom, who he said was ambitious and desirous of being made the Ologbotsere, for the invasion.

The Ologbotsere confirmed his visit to the Police Zonal Headquarters in a telephone chat with our reporter yesterday afternoon.

He said: “Like I said before, no Nigerian is above the law, and we show good leadership by honouring police invitation. I have told them what I know and that is that I have nothing to do with the invasion.

“Nevertheless, I appealed to the police to carry out thorough investigations on the matter to unravel those behind it and to ensure that they are also interrogated and made to face the law if found guilty.”

It will be recalled that the invasion of the Olu’s palace in Warri last month coincided with the removal of two very precious pair of crowns from the palace.

“The whereabouts of the priceless crowns remained unknown nearly one month after.

The incident has thrown the kingdom into confusion as the coronation of the Omoba Tsola Emiko as 21st Olu of Warri draws nearer.