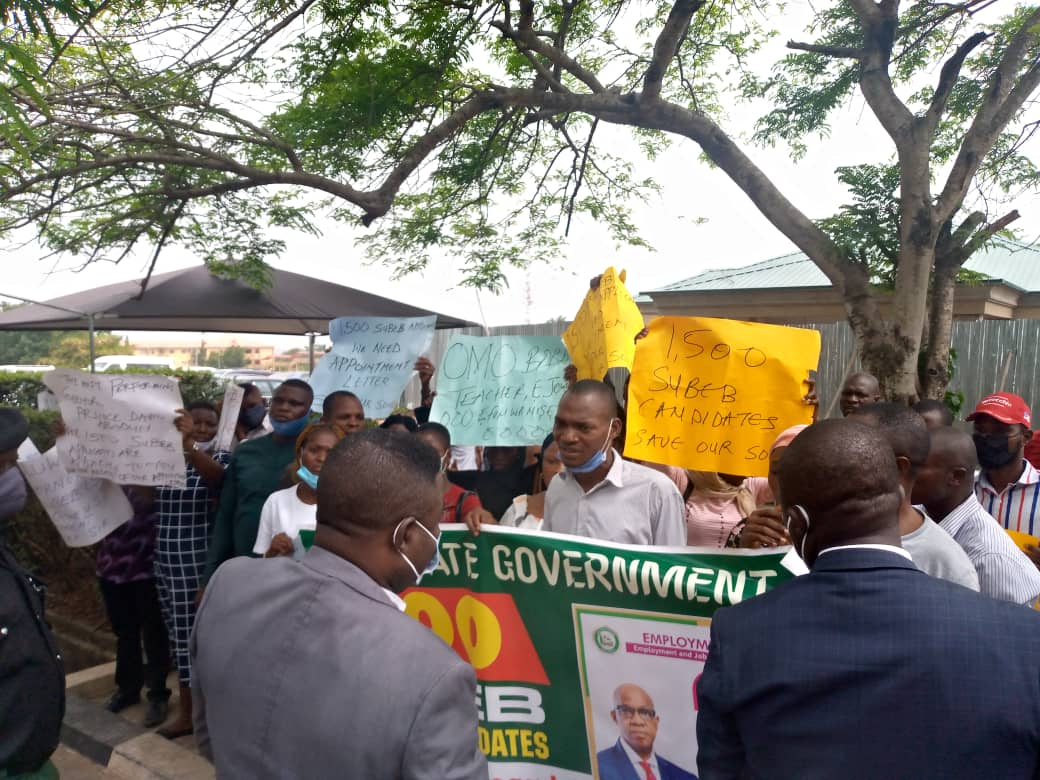 About 1,500 youths have protested against the government of Ogun state fora allegedly cancelling plans to recruit teachers in the state.

Youths in Ogun state have staged a protest accusing the government of cancelling the recruitment of teachers said to have been shortlisted for the job.

The youths who are also applicants staged a protest on Tuesday at the Governor’s office, Okemosan, Abeokuta, carrying placards with various inscriptions, as they appealed to Governor Dapo Abiodun to give them their appointment letters.

According to them, the Ogun State Commissioner for Education, Professor Abayomi Arigbabu, had once told them that their appointment letters may not be out anytime soon, blaming this on paucity of funds.

This, they said, gave rise to the recruitment of ‘casual teachers’, who would serve as interns for a period of two years.

The state government began the recruitment of teachers in the last quarter of 2019.

Our correspondent reports that qualified applicants were later shortlisted for interviews, but the exercise was put on hold as a result of the COVID-19 pandemic lockdown.

In October 2020, Abiodun assured that 1,655 graduate teachers would be employed, adding that the process was at an advanced stage.

He disclosed that successful applicants would be contacted in due time.

But, the applicants said none of them has heard from the state government as of March 30, 2021.

Speaking on behalf of the protesters, an applicant, Yemi Oyeleye, pleaded with Abiodun to give them the teaching job, as they have waited for several months.

The protesters expressed worries that the Education Commissioner has announced the recruitment of casual teachers, cancelling the first recruitment exercise.

Addressing newsmen at the NUJ Secretariat, Iwe-Iroyin, Abeokuta, Adeleye said “what we expected from the government was the completion of the ongoing recruitment exercise, which has taken up to two years now.”

Oyeleye said the government no longer communicate with them, saying “We are the ones forcing ourselves to hear from them now, but they refused to talk to us.”

According to him, several letters have been written to the governor, commissioner and other top government functionaries, but to no avail.

“We want them to release our appointment letters. They have started recruitment, they sent us a congratulatory messages that we have been selected,” Oyeleye pleaded.

Also in his words, another applicant, Ismail Gbeletan, stated that the state government gave no updates on the 1,500 shortlisted applicants, but it rolled out the recruitment of casual teachers.

Gbeletan recalled meeting with Arigbabu, saying he confided in them that the issue of appointment letter is not feasible again because the government is not that financially buoyant to pay permanent teachers.

Reacting, the Chairman of the State Universal Basic Education Board (SUBEB), Dr Femi Majekodunmi stated that the state government has not cancelled the recruitment of 1,500 teachers.

He, however, said the process was stalled by the paucity of funds.

He described the latest recruitment exercise as an interim arrangement, a contract for two years.

“Government did not forget them. The situation of things and paucity of funds is the factor. But, the interim recruitment is available for them to partake,” Majekodunmi said.