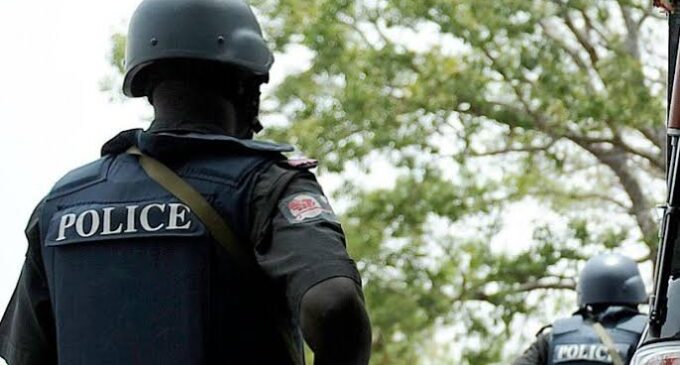 Ekiti State Police Command has confirmed the arrest of three suspects over the violence that marred the Ekiti East State Constituency 1 by-election on Saturday.

The seat became vacant, following the death of an All Progressives Congress (APC) lawmaker representing the constituency, Juwa Adegbuyi, in February.

Police Commissioner Tunde Mobayo, who spoke yesterday, said the suspected thugs were apprehended in their hideout and were being detained at the police headquarters in Ado-Ekiti, the state capital.

Mobayo, who announced this through the command’s spokesman Sunday Abutu, an Assistant Superintendent of Police (ASP), assured the residents that those arrested would be charged to court at the conclusion of investigation.

“Yes, three suspected party thugs have been arrested. They were picked up where they were hiding and are now being detained in our headquarters.

“Murder is a capital offence and the police won’t watch and allow anyone to take the law into his own hands. Nigeria is a nation being guided by laws.

“Just like we assured our people on Saturday, everyone who had hands in the killings will be brought to justice.

“I am assuring that all those that were arrested will be taken to court as soon as we conclude investigations and gather enough evidence,” he said.

On the speculations that a policewoman was killed in the violence, Mobayo said: “No police officer died during the shooting by party thugs. Though one of our officers was shot, but she didn’t die, as wrongly speculated.

“The policewoman, who though was in a critical condition yesterday (Saturday), is now responding to treatment. She is getting better.”

The governor was accompanied by Police Commissioner Tunde Mobayo and other leaders of security agencies in the state.

Speaking at the palace of Olomuo, Oba Noah Omonigbeyin, Fayemi promised not to politicise the killings.

He prayed against a recurrence of the incident, saying his government would not tolerate violence and other manifestations of brigandage that could trigger hatred among the residents.

“We may not be able to bring back the dead, but every perpetrator will be dealt with to serve as deterrent to others.

“After I spoke with Senator Abiodun Olujimi yesterday (Saturday), I called the police commissioner and instructed him to do everything possible to arrest the perpetrators. I’m happy to inform you, kabiyesi, that as I arrived the state today (Sunday), the police commissioner said all the culprits have been arrested and they shall be charged to court on Monday for murder,” Fayemi said.

The governor hailed Oba Omonigbeyin for maintaining peace in the community and preventing the residents from taking the law into their hands aftermath of the violence.

Also, the INEC has promised not to surrender to what it called “electoral banditry” which could discredit the electoral process and pre-determine the outcomes.

INEC National Commissioner and Chairman of Information and Voter Education Committee, Mr. Festus Okoye, said this yesterday in an interview with the News Agency of Nigeria (NAN) in Abuja.

Okoye was speaking on the decision to indefinitely suspend the Ekiti East State Constituency 1 election held on Saturday in Ekiti State.

The commissioner said the decision was meant to preserve the integrity of the country’s elections as well as safeguard the lives of citizens.

He stressed that for INEC to proceed with any election in the face of brazen violence that had compromised the integrity of such a poll would amount to dereliction of its electoral duty.

“These measures are necessary to preserve the integrity of elections and the life and safety of voters, election officials and security personnel on election duty.

“To buckle under the pressure of organised, coordinated and mindless violence will lead to and amount to surrendering the sovereign democratic rights of the people to clean elections, and the suzerainty of anti-democratic forces,” he said.