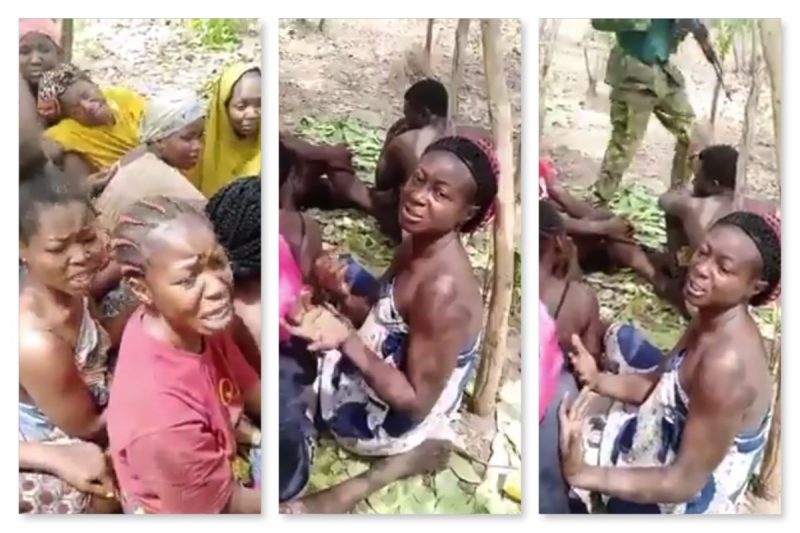 The 39 students of the Federal College of Forestry Mechanisation, Afaka, Kaduna State, who were abducted by bandits on Friday, appear to be having it rough at the hands of their captors, according to videos released by the gunmen yesterday.

In the videos, the students are half naked, made to sit on bare floor and whipped by some of the AK 47 bearing bandits.

The ladies have only their wrappers tied across their chests while the men have only boxers or trousers on.

They are seen crying as the koboko (horsewhip) makes contact with their skin.

The bandits are asking for a ransom of N500 million while the students plead with government to meet the demand.

But President Muhammadu Buhari vowed yesterday that government would not allow bandits, kidnappers and terrorists destroy the nation’s school system.

In a post attached to two of the video clips released through the account of Tasha Sandra, a mobile phone number was given as the only contact line of the kidnappers.

The students, speaking in unison in the video, said: “Our lives are in danger. Just give them what they want.”

One of the students, who gave his name as Benson Emmanuel, appealed to government to “come and rescue us.”

He said: “Most of us here have been badly injured. Time is going. Most of us here are having health issues and they are complaining about the government trying to send security operatives to come and rescue us from here, which is almost impossible, because these people have surrounded us, saying anybody that comes from anywhere to come and rescue us or do anything by force, they are going to take our lives.

“We are appealing to the government to come now, because these people have a bad mind towards us.”

In another video, one of the students, who identified himself as Abubakar Yakubu, asked government to come to their rescue by paying the N500 million demanded by their abductors.

He said: “My name is Abubakar Yakubu, a student of Federal College of Forestry Mechanisation Kaduna. I am appealing to the Governor of Kaduna State, the state government and Federal Government to come to our rescue.”

Another student appealed to government to come to their rescue by paying the N500 million demanded by their abductors.

“Please, we need your help. They are asking for N500 million,” she said.

It was also gathered that one of the abductees named Maman Ahmed is six months pregnant.

She is seen in one of the videos saying in Hausa: “Salamu alaikum, I am one of the students that were abducted from Forestry Mechanisation the day before yesterday.

“We are appealing to the government to help us. We heard they are saying that they will send soldiers to rescue us. We are urging them not to send anyone because they have said that if soldiers come, none of us will live.”

Another female student, Rose Okoye, was said to be preparing for her wedding when the gunmen struck.

The mother of one of the abductees, Mrs. Charity Nyam, confirmed to our correspondent on the phone that she saw her daughter being whipped in one of the videos.

She appealed to government to act fast to get the captives out, saying they are poor parents and cannot raise the N500 million ransom.

Three videos have so far been released by the gunmen all through the Facebook accounts of the abductees.

It was gathered that the bandits have already contacted some of the parents to demand ransom.

A credible source in the school confirmed that the kidnappers had called, demanding N500 million.

Some of the 180 students who were rescued on Friday by security men were escorted to the school by soldiers yesterday to pick their belongings.

They were driven into the school premises in military trucks.

Three of the female students were overcome by trauma on entering the school compound and fainted.

They were however resuscitated by their colleagues.

Speaking on the students’ abduction yesterday, President Muhammadu Buhari said his administration would do everything possible to defend the nation’s school system against bandits, kidnappers and terrorists trying to destroy it.

The President said through his Senior Special Assistant on Media and Publicity, Mallam Garba Shehu, that government needed the support of the general public to deal with the problem of insecurity.

According to him, a country’s safety depends much on the efficiency of its local intelligence network.

President Buhari commended the efforts of the Kaduna State Government and early response of the military which led to the rescue of 180 students including eight staff members but urged that the others declared missing be found and returned safely to their families.

The President also commended efforts and contributions of local intelligence in significantly thwarting the kidnappers.

“Our military may be efficient and well-armed, but it needs good efforts for the nation’s defence and the local population must rise to this challenge of the moment,” the President said.

President Buhari expressed sympathy with the victims of this incident and hoped for an early end to the ordeal of those that were still held captive.

Thirty nine students -23 females and 16 males- of the Federal College of Forestry Mechanisation were declared missing on Friday after bandits raided the institution in the latest attack on schools in the north by gunmen.

Soldiers who raced to the school following the alarm raised by neighbours were able to rescue 180 others.

Governor Nasir El-Rufai said the bandits apparently targeted a different school for the raid but opted for the college of forestry mechanization after government, acting on intelligence, deployed armed security men to the secondary school.

The army confirmed on Friday that soldiers indeed foiled an attempt by bandits to attack the Turkish International School, Kaduna.