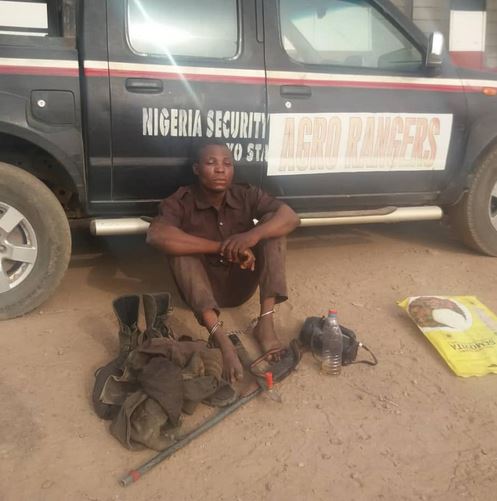 The suspect who wore a Vigilante Group of Nigeria uniform, in the company of five other suspects invaded the Fulani settlement on Tuesday, wounding six persons.

A suspect has been arrested and paraded by officials of the Nigeria Security and Civil Defence Corps (NSCDC) over an alleged attack on Fulani settlement in Idigba-Olomi village in Ogbomosho, Surulere North Local Government Area of Oyo State.

Commandant of the Corp in the state, Iskilu Akinsanya, who disclosed this on Wednesday, said the suspect, Tajudeen Shehu was arrested after Miyetti Allah Chairman Ogbomosho branch “Muhammad Mahmud, alerted the Corp about the attack.

The NSCDC boss said that Shehu, who wore a Vigilante Group of Nigeria uniform, in company of five other suspects invaded the Fulani settlement on Tuesday. Six persons wounded in the attack by the group are receiving treatment at the hospital.

He stated further that items recovered from the suspect include, one red Bajaj motorcycle with Osun registration number EKG 100 UP; one single barrel local gun, cutlasses, petrol in ragolis bottle, torch light and a local charm.

During interrogation, the suspect said that he was attacked by unknown person in the night and that was why he reinforced five other members for the attack.

The Commandant warned Nigerian not to take law into their hand but should report or lodge complain to security agencies especially NSCDC in their neighbourhoods.