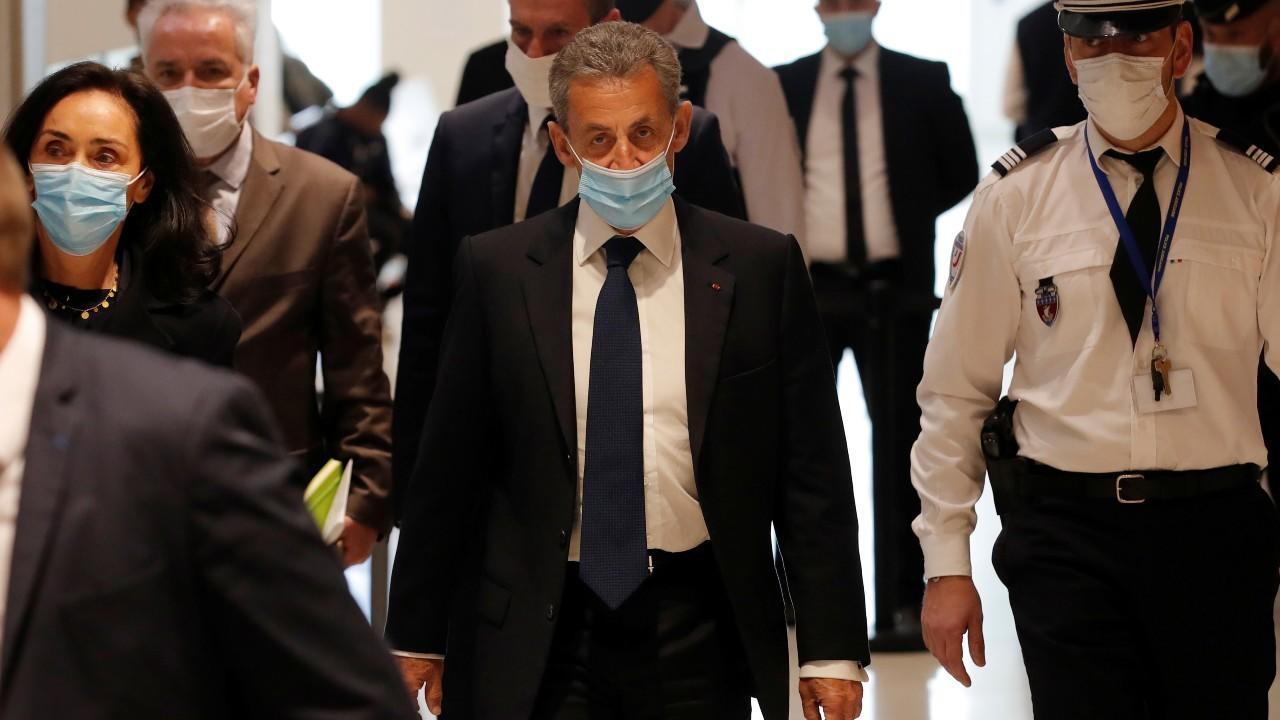 Tough-talking politicians from the right are accustomed to demanding “exemplary” punishments. This week, they did not appreciate the judiciary making an example of their champion, Nicolas Sarkozy, venting their fury at a special prosecutor’s office tasked with cleaning up French politics.

The former French president was handed a jail sentence on Monday for corruption and influence-peddling, marking a legal landmark for postwar France – one that rattled the political class and fuelled talk of a “judicial persecution”.

Sarkozy was found guilty of attempting to bribe a judge by offering him a plum job in return for information on one of the many investigations that have dogged him since he was voted out of office in 2012. He was sentenced to three years in prison, two of them suspended, making him the first former head of state in postwar France to receive a custodial sentence.

The 66-year-old will remain free while he appeals. Should his appeal be rejected, he is likely to serve a year at home with an electronic tag rather than go to jail. Nonetheless, his conviction and sentencing have shattered long-held assumptions about the “untouchability” of French heads of state and triggered a furious backlash against the judiciary.

“The office of president has always been seen in some ways as being above the law,” said David Lees, an associate professor of French history at the University of Warwick in the UK. In this respect, Lees told FRANCE 24, Monday’s verdict marked “a turning point”, paving the way for “a whole series of potential future investigations – not least into Sarkozy himself.”

Among the many trials and tribulations facing the former champion of the right, which include allegations he took campaign cash from the late Libyan dictator Muammar Gaddafi, the case ruled upon by the Paris court on Monday was regarded by many observers – in Sarkozy’s camp in particular – as being of lesser importance.

The founder of the conservative Les Républicains party was handed “an extremely harsh sentence based on an extremely weak case,” argued a dismayed Bruno Retailleau, the head of the party’s Senate group.

Judge Christine Mée and her two fellow magistrates, however, had a very different take on the matter, ruling that the case was “particularly serious” because it involved a former head of state who, as such, was meant to “guarantee the independence of the judiciary”.

The prison sentence she pronounced was “designed to shock”, read an editorial in Wednesday’s edition of French newspaper Le Monde, describing the verdict as a “scathing lesson” for a former president who once mocked magistrates as indistinguishable “little peas”.

Though Sarkozy’s conduct was “morally shocking”, the newspaper said the court’s momentous verdict carried wider implications, adding: “Something very political was at stake here – asserting the authority of the judges over a former president of the Republic who never ceased his attempts to discredit them.”

Reflecting on the political implications of Monday’s conviction, Le Monde argued that Sarkozy had “paid the price” for his strategy of whipping up hostility towards the judiciary “every time he is in a tight corner”. It urged the former president to refrain from further escalating this tug of war, “which has become not only a trap for him but also a danger for the country.”

Within minutes of Sarkozy’s conviction, however, his allies proved their intention of further upping the ante, focusing their attacks on the financial prosecutor’s office, known as the PNF, which led the case.

Les Républicains party leader Christian Jacob slammed the “judicial persecution” of Sarkozy, calling for an urgent investigation of the “methods and independence” of the financial prosecutor. His deputy, Guillaume Peltier, said “there is no justice (…) when the poison of politicisation and partiality weighs on the judiciary.”

Further to the right, Marine Le Pen, the far-right leader who once clamoured for investigations into Sarkozy and his allies, accused the judiciary of interfering with French democracy by pursuing members of the opposition only. She reiterated past calls for the PNF to be scrapped.

“The people are sovereign (…), not the magistrates, otherwise we have a government of the judges,” said the leader of the National Rally (Rassemblement National), formerly the Front National. Echoing her words, the party’s deputy leader Jordan Bardella blasted a “judges’ republic”.

Much of the right-wing press was equally scathing, publishing a flurry of articles on the alleged political bias of magistrates and prosecutors, with conservative columnist Ivan Rioufol speaking of a “judicial coup d’état”.

Much of the criticism levelled at the judiciary pointed alternately at the prosecutors who led the accusation and the judges who ruled in the case, signalling widespread confusion as to their respective roles. There was little doubt, however, that the PNF was the prime target.

The financial prosecutor’s office was set up in 2013 in the wake of the “Cahuzac Affair”, a corruption scandal involving a former budget minister who was jailed for funnelling cash to a secret bank account in Switzerland. It was invested with the specific mission of hunting for “cases of fraud and ethical misconduct that undermine national unity and the exemplarity of the Republic.”

While the scandal that led to its creation involved a Socialist minister, Jérôme Cahuzac, hobbling former president François Hollande’s presidency from the get-go, the PNF’s most resounding investigations since then have involved prominent right-wing politicians, leading to allegations of a political bias.

In an op-ed published by conservative daily Le Figaro, Hervé Lehman, a lawyer and former investigative magistrate, claimed the prosecutors’ office had been “set up by Hollande to destroy the right – and has been remarkably successful in doing so.”

Lehman, a frequent critic of the PNF, said its “extremely aggressive” prosecution of Sarkozy mirrored its treatment of François Fillon, a former conservative prime minister whose presidential candidacy in 2017 was fatally undermined by a fake job scandal involving his wife and children. Fillon was later sentenced to five years in jail, three of them suspended, for embezzling public funds, with the judge stating that his actions had eroded trust in the political class. The verdict has since been suspended pending an appeal by the former PM.

“Without the PNF, I don’t think Emmanuel Macron would be president of the Republic today,” said Les Républicains senator Valérie Boyer on Tuesday, reflecting a widely-held view among conservatives that the current French president owes his election in 2017 to Fillon’s legal woes in the final stretch of the campaign.

At the time, criticism of the prosecutors reflected the difficulties faced by the fledgling PNF as it sought to cut its teeth in a political environment hostile to judicial oversight. Fillon’s allies had argued that a parliamentary committee should first have dealt with the case “in-house”, a view shared by many lawyers, including Eric Dupond-Moretti, now Macron’s justice minister. Fillon himself spoke of an “institutional coup d’état”.

Dismissing their “electoralist” complaints, France’s main magistrates’ union countered that politicians should not be exempt from investigations merely on the grounds that they are candidates in an election. However, accusations of bias later resurfaced following a leaked report suggesting that the former head of the PNF had come under pressure from her hierarchical superior, the Paris prosecutor, to investigate Fillon.

In the case against Sarkozy, much of the anger has focused on the use of wiretapped conversations between the former president and his longtime lawyer Thierry Herzog, which led prosecutors to suspect the duo had promised to help judge Gilbert Azibert land a job in Monaco in exchange for leaking information about another legal case.

Sarkozy and Herzog had complained that the confidentiality of communications between a lawyer and his client was violated by the wiretaps, a view shared by scores of lawyers who packed the Paris courtroom on Monday.

However, the court concluded that the use of wiretapped conversations was legal as long as they helped show evidence of corruption-related offenses. As some legal experts have noted, the confidentiality rule is designed to protect a client from being exposed by his or her lawyer; it does not protect them from prosecution if they commit a crime.

Jean-François Bohnert, the head of the PNF, has rejected allegations that his office uses “the methods of secret agents” – words used by Dupond-Moretti shortly before he was appointed justice minister last July. Speaking on RTL radio on Tuesday, Bohnert also dismissed accusations of a politicised justice.

“The PNF does not do politics, nor does it acknowledge political offences; the PNF knows only economic and financial offences,” Bohnert explained, noting that such offences sometimes have a political connotation due to the identity of the defendants. Politicians account for only “a few dozen cases” among the more than 600 handled by his office, he stressed, noting that financial investigations led by the PNF since its creation had enabled the French state to recover “more than 10 billion euros in seized assets and fines”.

In the case of Sarkozy and his co-defendants, Bohnert added, “If the offences were committed – it was the prosecutors’ opinion, now it is also the court’s opinion – then we had no other choice but to pursue the case and request sentences.”

‘The wrong is being righted’

Even as Sarkozy’s allies and supporters rail against Bohnert’s office, other commentators have welcomed Monday’s ruling as evidence of an efficient judicial system that can finally hold the top politicians accountable.

“The independent judiciary has convicted a former president of the Republic, a lawyer with a brilliant career, and a magistrate admired by many,” said Eva Joly, a former judge and European lawmaker, hailing a sign that “[France’s] institutions are functioning”. Speaking on BFM TV, fellow former judge Laurence Vichnievsky, now a centrist lawmaker, dismissed talk of a “judges’ republic”, urging politicians to respect the judiciary.

Defending his conduct during the trial, Sarkozy vigorously denied any malicious intent in his offer to help Azibert. He told the court that his political life was all about “giving [people] a little help, nothing more”.

“There is something about the networks and the environment of French politics that seems to encourage this kind of behaviour,” said Lees of the University of Warwick. Judging by Monday’s ruling, this sort of “little help between friends” will no longer be tolerated.

In recent years, “France has committed itself to moralising its public and political life,” political analyst Bruno Cautrès told FRANCE 24, noting that Sarkozy’s case had given the PNF unprecedented visibility. He added: “The country was lagging behind its European neighbours in this respect – that wrong is now being righted.”