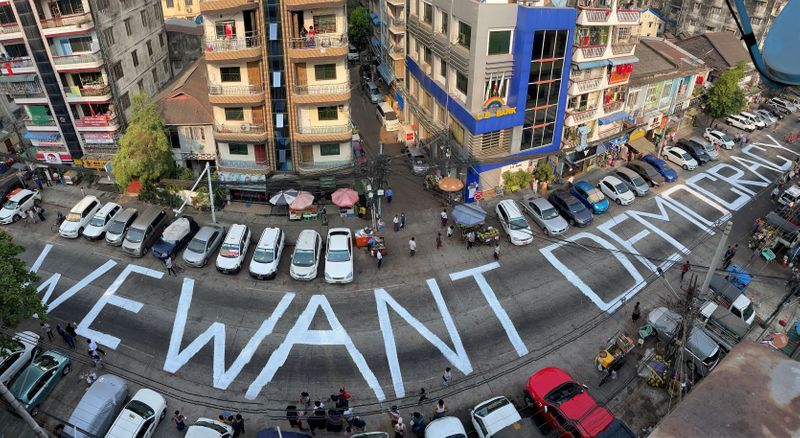 Myanmar was set for more street protests on Wednesday against military rule as regional power Indonesia tries to use mediation to move the country out of its post-coup impasse.

This week saw huge rallies and a general strike on Monday to denounce the military’s February 1 coup and demand the release of elected leader Aung San Suu Kyi, despite a warning from authorities that confrontation could get people killed.

On Tuesday, gatherings were smaller overall but a rally by members of different ethnic minorities was taking place in the commercial capital Yangon, with civil servants from the energy ministry joining in.

“We ethnic minority people haven’t had the chance to demand our rights but now we do,” one demonstrator, San Aung Li, a 26-year-old member of the Kachin minority, told Reuters. “So I’m supporting the protest as all ethnic people are, with one voice.”

With the protest and a civil disobedience movement paralysing life in Myanmar, Indonesia has been trying to find a way out.

Jakarta said on Wednesday that it was in talks with both sides in Myanmar’s political crisis and its foreign minister may visit to help find a solution, but she had no plans for an immediate trip.

The statement came after a leaked Myanmar government document showed Indonesia’s foreign minister Retno Marsudi was to visit the coup-hit nation on Thursday.

Indonesia said on Wednesday that no visit had been scheduled. But it left open the possibility of a later trip by Marsudi, who was still expected to visit Myanmar for a special meeting of foreign ministers from the Association of Southeast Asian Nations (ASEAN), the timing of which has not yet been announced.

See also  If they speak against me, the anger of heaven will be upon them and how they will end will shock everybody- Fr Mbaka reacts to FG’s comment about him

Marsudi has been rallying support in Southeast Asia for a special meeting on Myanmar and sources told Reuters that Jakarta proposed the region sends monitors to ensure the generals hold “fair and inclusive elections”.

The prospect of her visit went down badly with many protesters, who are concerned any agreement with the junta could undermine their demands for the recognition of the November polls won by Suu Kyi’s party.

Hundreds gathered outside Indonesia’s embassy in Yangon on Tuesday to voice their opposition to the election proposal, while members of Myanmar’s Muslim community were due to hold another protest on Wednesday.

The Future Nation Alliance, a Myanmar-based activist group, said in a statement a visit by Marsudi would be “tantamount to recognising the military junta”.

The group demanded foreign officials meet with Htin Lin Aung, a representative of the Committee Representing Pyidaungsu Hluttaw (CRPH), formed by ousted lawmakers, who has been appointed the “sole responsible official for foreign relations”.

Myanmar’s political crisis raises the prospect of isolation and investor jitters just as the Covid-19 pandemic has undermined consumption and choked off tourism.

Military chief General Min Aung Hlaing, in a meeting with his ruling council on Monday, called for state spending and imports to be cut and exports increased.

“The council needs to put its energy into reviving the country’s ailing economy. Economic remedy measures must be taken,” state media quoted him a saying.

Min Aung Hlaing did not link the protests directly to economic problems but said the authorities were following a democratic path in dealing with them and police were using minimal force, such as rubber bullets, state media reported.

Security forces have shown more restraint compared with earlier crackdowns against people who had pushed for democracy during almost half a century of direct military rule.

Even so, three protesters have been shot and killed. The army has said one policeman died of injuries sustained during the protests.

The military has accused protesters of provoking violence but UN Special Rapporteur Tom Andrews said the millions who marched on Monday in a “breathtaking” turnout showed they were prepared to face up to military threats.

Western nations sought to increase pressure on the junta this week with the EU warning it was considering sanctions that would target businesses owned by the army.

The US imposed sanctions on two more members of the junta and warned it could take more action.