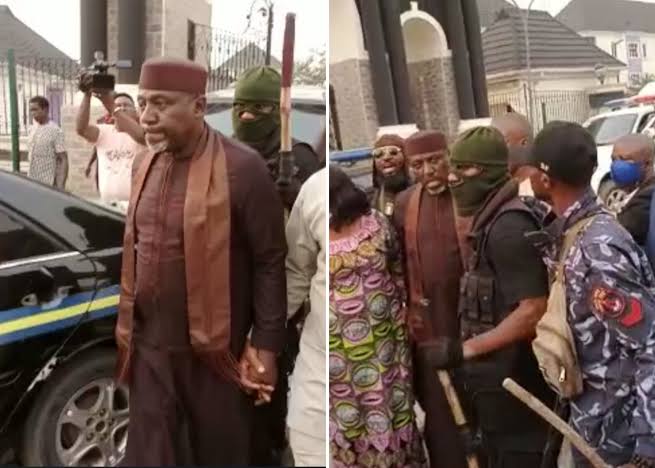 The reason why Nigerian senator Rochas Okorocha was arrested over the weekend has been given by the police.

Police has revealed why it arrested a former Governor of Imo State, Rochas Okorocha.

According to the Police, Okorocha was arrested for breaking into the Royal Spring Palm Hotels and Apartments.

SaharaReporters had reported how the state government seized the estate allegedly belonging to Nkechi, wife of the former governor.

Enyinnaya Onuegbu, the commissioner for lands, had on Friday led a team of government officials and police officers to seal the property situated along Akachi Road in Owerri, the state capital.

In response, Okorocha on Sunday stormed the facility, demanding to be allowed in but the security personnel on the ground refused to open the gate.

The lawmaker representing Imo West Senatorial District was said to have ordered his men to make way for him to enter the place and they forced the gates open.

On the orders of Okorocha, the gates were flung open and the men with him also allegedly destroyed vehicles and injured the security guards at the place.

Not long after forcibly gaining access into the property, masked police operatives led by two aides of Governor Hope Uzodinma identified as Chinasa Nwaneri and Eric Uwakwe arrived to take him away.

Also arrested were Ijeoma Igboanusi, deputy chief of staff when Okorocha was governor, and Lasbrey Okafor-Anyanwu, who was a commissioner in Okorocha’s government.

Two persons were said to have been killed while many others sustained injuries during the incident.

READ  I Lost Everything But I Thank God For Saving My Life, Says Occupant Of House Razed By Fire In Delta (Photos)

Ikeokwu said the police moved to Akachi Road when they received a distress call that the estate sealed by the state government had been forcibly opened by some men led by the senator.

Orlando said, “The command received a distress call regarding what we termed to be unrest at Royal Spring Palm Estate, and the operatives moved to the place. We discovered Okorocha led some persons to the place hitherto sealed by the Imo government.

“The command calmed the situation and invited Okorocha to come and explain why he led the violent breaking into the estate that led to damages.”