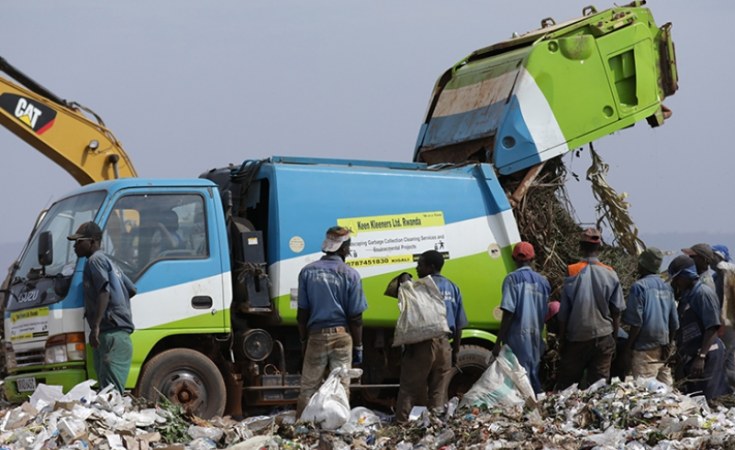 With heaps of refuse as permanent features in many Southwest states of Nigeria, an environmentalist, Mr Hubert Ajayi has urged governments to establish waste recycling plants to tackle challenges of waste disposal and management.

A survey conducted by the News Agency of Nigeria (NAN) in the Southwest region shows that waste disposal and management is a huge challenge in many major towns, cities and state capitals.

This is apparent as a first time visitor to these urban centres is more often than not greeted by the eyesore of heaps of waste on roadsides, in channels, and drains.

Indiscriminate waste disposal in drains, channels and streams especially during the rainy season result in blockage of drains, as well as streams and rivers overflowing their banks.

This causes flooding that submerges buildings, roads and farms and displaces residents with the attendant loss of lives and properties.

In an interview with NAN in Ilorin, Ajayi says that recycling is the solution to the challenge of effective disposal and management of waste for it not to become a nuisance to the environment.

”Most of the things we find in our bins today are not meant to be there, if we are a people that believe in recycling.

”That is what the developed countries do that doesn’t make their waste go to waste but to other products.

”It will be a laudable achievement for the government to have a recycling factory instead of leaving it in the hands private individuals.

”If the government handles it, it will cover more and people will be involved unlike what we have now that most recycling plants are privately owned,” he said.

Olatunji explains that the provision of Roll on, Roll off (RORO) bins in some strategic locations across the local government area has assisted in putting a check to indiscriminate dumping of refuse to a certain level.

Olatunji however asserts that the provision of RORO bins are not enough because of the growing nature of Ilorin, the Kwara capital.

In his contribution, Mr Ola Oresanya, the Special Adviser to Ogun Governor, Dapo Abiodun on Environment, says the present administration in the state is tackling the issue of waste management with all seriousness.

He says the state government has also finalised plans to rehabilitate and incorporate cart-pushers into its new waste management reforms for optimal performance.

According to Oresanya, the reform will offer the cart-pushers new opportunities through its structured Private Service Providers (PSP) scheme, whereby they will work as loaders and earn steady income .

“Some of the cart- pushers will be employed as community recyclers at community recycling centers to be established soon in all the 20 local government areas of the state,” he said.

Oresanya says that Ogun is faced with the challenge of having to manage a high volume of generated waste because of large concentration of firms and industries in the state.

“We already have Ogun Recycling Initiative, that is, a document, developed to guide investors because part of our policy statement is to ensure that within the business value chain, the private sector plays an integral role.

“The service chain includes waste collection, waste processing, recycling and final disposal and along the strata, we have integrated the private sector,” he said.

Mrs Biola Bashorun, Group Managing Director, ZL Global Alliance, the company handling waste disposal in all major cities of Ondo State, says the company is committed to a cleaner and neater environment in the state.

Bashorun told NAN in Akure that the company’s mission was to provide effective waste management system to ensure that the state was clean at all times.

Bashorun said that drainages and water pathways in Akure and other major towns had been cleared so as to prevent flooding ahead of the expected heavy rains predicted by the Nigerian Meteorological Agency.

She advised residents not to dump refuse in the waterways so as to prevent flooding whenever heavy rain starts.

“Our secondary job is to create wealth out of our waste and we have a slogan in our company: No waste is to be wasted; waste is raw material.

“So, under our waste-to-wealth programme, we package waste as raw material that can be turned into new products. We have one centre in Akure for that and we are building new ones in Owo and Ondo towns.

“We are committed to ensuring that our environment are safe and clean, that is why the company is created and we have better and competent hands to help us manage and turn waste to wealth,” Bashorun said.

Mrs Deborah Fakorede, a resident, however, deplored “inconsistence and irregularities” in respect to waste collection by some of the contractors appointed by government.

“My major concern is that the agency is not consistent. They come when they need money. Sometimes, it may be once in a whole month or twice.

That is why the state capital, Akure, is seen with a lot of refuse often.

“Go to major markets in Akure, many refuse drums are filled up and one can see refuse falling off to the ground and creating offensive smell for many days, thereby negating the purpose of being sited there.

“Whenever we call them and complain, they would say their vehicles are faulty, no money to fuel the vehicles, or that the roads are bad, if it is during rainy season.

“They give different excuses which are not tenable, as if they are not collecting money from us. If they have been coming regularly, Akure streets would be more clean,” Fakorede said.

She advised the government to put in place monitoring mechanism that would ensure that waste collection and proper disposal was carried out in the state.

However, Mr Idowu Akin, a waste contractor, debunked the allegation of inconsistence levelled against his company.

Akin explains that the major problem waste collectors face is that of bad roads at the dump sites.

“The challenge we are facing mainly is at the dump sites. The roads are not good. And you know when roads are not good and trucks are plying them often, the vehicles will break down. We are still working tirelessly to ensure that we still repair them and collect waste for disposal. It is what we have signed to do and we are not going back on it,” he said.

According to Akin, waste managers in the state are discussing with the government to resolve the problem so that their work will be smooth and effective.

Mr Fatai Oyewole, General Manager of Osun Waste Management Agency (OWMA) said that the state government has made the process of waste disposal and management easy in the state.

According to Oyewole, residents have been educated on how to properly keep their refuse for waste collectors to pick at a fixed price.

He said the state government had instructed every household in the state to register with an accredited waste collector for their refuse to be picked up and taken to designated refuse dump sites.

Oyewole says the waste collected are usually sorted out at the dump sites and items that can be recycled are set aside, while pure waste are destroyed.

The National Environmental Standards and Regulations Enforcement Agency (NESREA) says it is collaborating with Osun Government and other stakeholders to ensure adequate and safe disposal of COVID-19 waste materials in isolation centers.

Mr Chukwudi Mwabuisi, NESREA Acting State Coordinator, says the collaboration is to prevent further spread of coronavirus in the state through adequate disposal of the equipment used for treating infected patients.

“We partner with the health ministry and the ministry of environment to ensure that the COVID-19 waste is collected via an insulator and burnt with the kits used by our men.

“The agency also has compliance and monitoring units which ensure that waste are not dumped indiscriminately in drainages and waterways across the state.

“The engagement of public and private waste collectors has really helped in checkmating the indiscriminate dumping of waste,” Mwabuisi said.

In Oyo State, an environmentalist, Mrs Temitayo Oniorisan described waste management as very poor in the state, particularly in Ibadan.

Oniorisan says that in spite of the weekly sanitation exercise in markets and other work environments; and the end of the month cleanup exercise, the measures have not yielded the desired result.

“One major problem facing the city of Ibadan is poor waste disposal and management. If you are entering the city for the first time, the sight that greets you is that of decaying garbage and refuse on the roads and kerbs.

“To address the environmental problems posed by poor waste disposal, the state government has introduced several measures that have not been sustainable.

“The arrangements for waste disposal in the state capital has not been effective mostly due to large population size, poor implementation of environmental laws and low level of awareness on the dangers inherent in poor waste disposal,” she said.

A resident of Ibadan, Mrs Adetola Olakunle, told NAN that privately-owned waste service providers collected waste in her residential area of Bodija, for a monthly levy on each house.

“Though the state government has gone into public–private partnership to manage waste disposal in the state, the waste service providers are not effective, the pick up time is not regular, and they don’t get to some streets.

“Also, there is still need for orientation and sensitisation especially among the illiterates because a lot of them don’t see the need to pay waste collectors but they will rather dump their refuse by the roadsides,” Olakunle said.

A competent source in NESREA says that indiscriminate dumping of refuse is a very common practice in the state.

“NESREA has been carrying out sensitisation campaigns on proper waste management and training scavengers and recyclers on waste segregation and sorting.

“However, people keep dumping refuse by the roadsides and at illegal dump sites. The government must intensify efforts at creating more awareness for the general public on various ways to properly manage and dispose their waste,’’ he said.

The official say that government need to enforce environmental laws and impose stiff penalties on defaulters, particularly people who dump waste on roadsides and waterways.