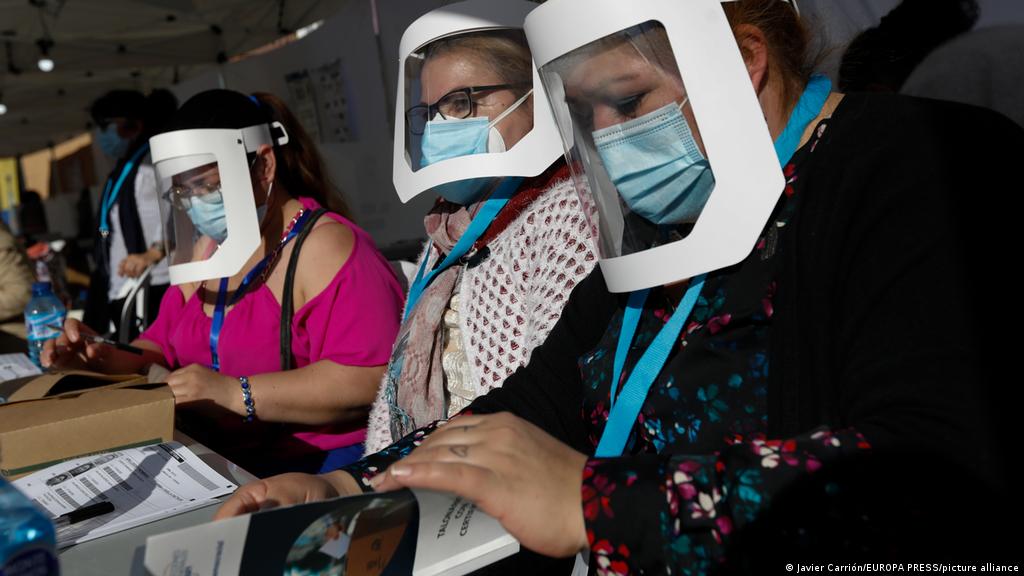 The vote was marred by long lines of people waiting to cast ballots as coronavirus restrictions caused chaos.

To win outright, a candidate needs 50 percent plus one vote or 40 percent and a 10-point lead over the nearest rival.

Arauz, 35, is a protegé of former president Rafael Correa, who currently lives in Belgium, where his wife was born, evading a conviction for corruption.

“Resounding victory in all regions of our beautiful country. Our victory is 2 to 1 ahead of the banker,” Arauz wrote on Twitter, although he urged supporters to wait for “official results before celebrating” his success.

The first results are due to be published on Sunday night.

The vote took place amid a backdrop of economic problems exacerbated by a second, deadly wave of the coronavirus pandemic that has swept Latin America.

Many voters arrived wearing face masks in a nation where the pandemic has claimed 15,000 lives and infected more than 257,000.

The country’s 13.1 million voters were choosing a successor to unpopular socialist President Lenin Moreno and the 137 members of the unicameral congress.

Exit polls show indigenous rights campaigner Yaku Perez finishing third with 16.7 to 18 percent in a congested field of 16 candidates, including Ximena Pena, the only woman.

Strict health precautions appeared to slow voting, and may have discouraged some from casting their ballots as long lines stretched outside polling stations.

Election official Enrique Pita told local media that instructions were given by the authorities of the National Electoral Council to relax restrictions “to allow the lines to advance.”

Arauz represents the Union of Hope (UNES) coalition of left-wing parties, while businessman Lasso, 65, is from the CREO right-wing movement.

Arauz’s mentor Correa, a two-time president, remains a strong political force in the country despite the graft conviction that sank his hopes of campaigning to become his protege’s deputy.

Arauz has promised to return the country to a socialist path after a four-year, austerity-driven hiatus under Moreno.

Arauz has pledged to disburse $1,000 to a million families during his first month in office, as well as a special tax on the rich.

Running in his third presidential race, free market advocate Lasso has said he would create a million jobs in a year.

He would likely stick to the austerity policies adopted by Moreno, who has had to rein in spending in exchange for International Monetary Fund loans to bolster the oil-producing country’s faltering dollar-based economy.

Ecuador is mired in debt as the profits of an oil boom during the Correa presidency dried up under Moreno as the price of crude crashed.

National debt rose from 26 percent of GDP to 44 percent during Moreno’s term.

The coronavirus epidemic has piled on the pressure, with some $6.4 billion in losses attributed directly to the health crisis, according to government data.

Ecuador’s economy is forecast to contract 8.9 percent in 2020, while unemployment reached 8.6 percent last September — more than doubling in nine months.

Moreno, his popularity at an all-time low of seven percent, did not seek reelection.

The second round is provisionally scheduled for April 11.