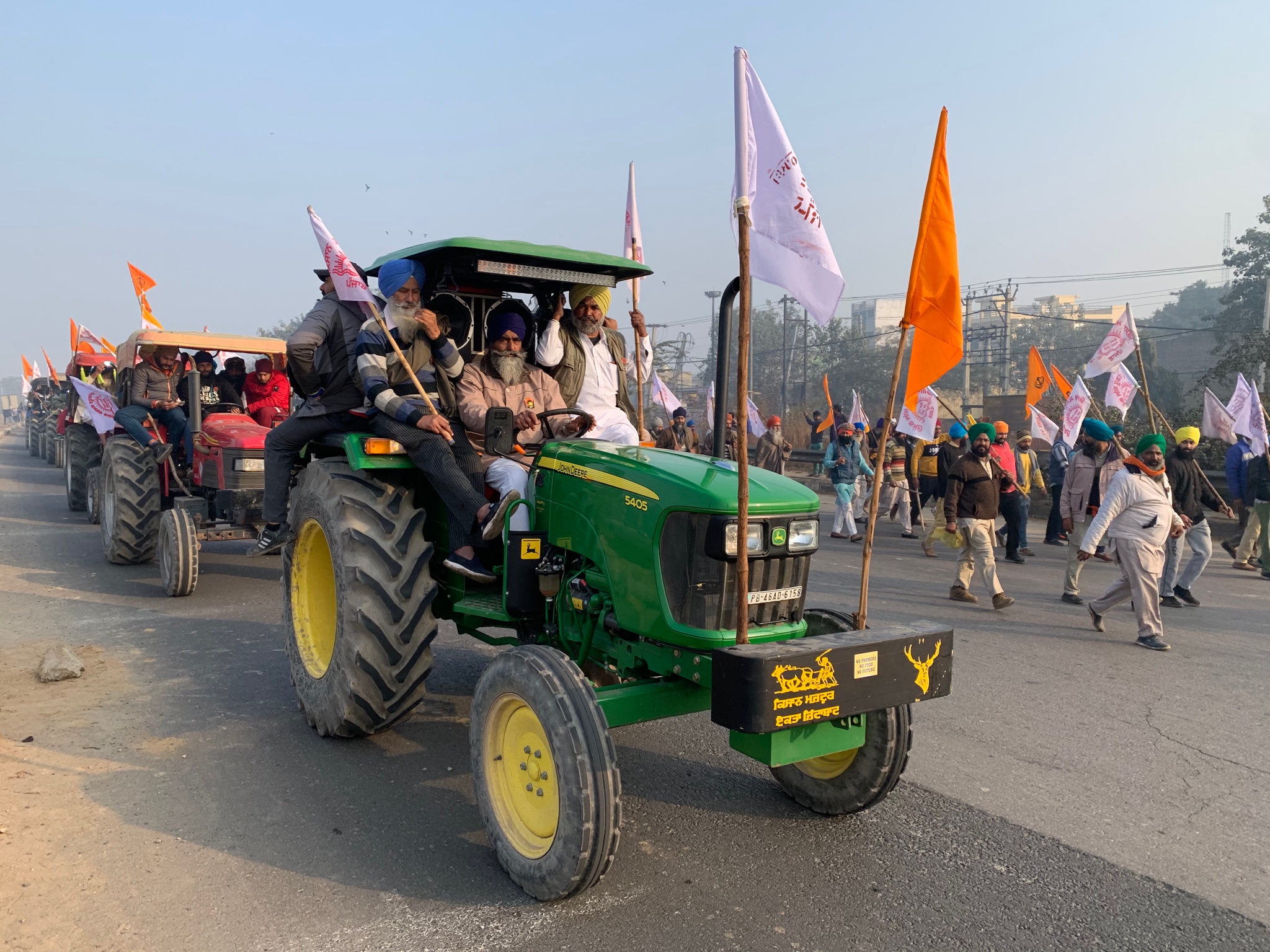 The main act in India on Tuesday was supposed to be the Republic Day parade marking the anniversary of the adoption of the country’s constitution on January 26, 1950.

The pandemic had forced a shortening of the traditional programme this year but even the truncated ceremonies had enough pomp and splendour to dominate the news.

The 72nd Republic Day parade featured the usual colourful displays of India’s diversity capped by a military parade that included, for the first time, a showcasing of India’s Rafale jets, newly bought from France, making a daring debut of “Vertical Charlie” formations over the majestic Rajpath ceremonial boulevard in New Delhi.

But a buildup of slow-tech farm tractors rained on the military parade on Tuesday, stealing the thunder of sophisticated fighter jets and dominating news coverage.

Tens of thousands of farmers protesting against new market-friendly farm laws broke through police barricades to reach the historic, Mughal-era Red Fort in the heart of the Indian capital in the afternoon, after the official parade had ended.

On the ramparts of the 17th century red sand stone fort, where the Mughals, colonial British and independent Indian administrations have raised their flags, some of the protesters hoisted a myriad mix of farm union and religious community banners.

After more than two months of demonstrations, farmers on Tuesday answered the call for a Republic Day protest, gathering around 8am local time at border points on the National Highway No. 1 linking the Indian capital to the neighbouring state of Haryana. Chanting slogans, dancing to protest songs, and showered with traditional flower petals, the scenes at capital’s border points looked more like harvest festivals than angry protests.

By noon, the live coverage headlines had switched to police firing tear gas as farmers broke through barricades preventing their entry into New Delhi. As the hashtags #KisanTractorRally (Farmers’ Tractor Rally) and #KisanTractorRallyLive trended on Twitter, news footage showed farmers surging past overwhelmed police lines, tearing down roadblocks in some places, as police fired tear gas and conducted baton charges in some places.

Police said one protester died after his tractor overturned but farmers said he was shot. Protesters laid the victim’s body, draped in the Indian tricolour flag, on the road for a while and sat around the corpse. Television channels showed several bloodied protesters and at least 86 police officers were injured, according to an official statement..

One of India’s longest-running farmer protest movements reached an alarming peak on Republic Day, exposing Prime Minister Narendra Modi’s failure to comprehend the level of opposition to the controversial new agricultural laws and to address the issues that have united powerful, and often competing, voting blocs against his ruling Bharatiya Janata Party (BJP).

READ  2019: Atiku under fire over ‘extravagant trip’ to Dubai with Obi, Ben Bruce, others

“Modi has harvested decades of agrarian anger with the farm laws. Today’s events show that the state underestimated the might of the people. The state should have known better,” said Amandeep Sandhu, a writer who documented agricultural practices in India’s Punjab farming heartland in his book, “Panjab: Journeys Through Fault Lines”.

The farmers crisis was sparked in September 2020, when the government crammed complex legislative changes into three new laws and pushed them through parliament during an opposition walkout. They were passed as Covid-19 rages through India, with the country reporting the world’s second-highest number of cases.

The new laws make farmers sell their produce on the open market – including agribusiness corporations and supermarket chains – instead of through state-run institutions that guarantee a minimum price.

Modi maintains the “reforms are needed for development”, and has warned that, “we cannot build the next century with the laws of the previous century.”

Since he came to power in 2014, Modi has opted for shock policy announcements with little preparedness that have left the populace scrambling to cope with the fallout – humanitarian and economic – of his populist moves.

Early last year, the prime minister sparked a mass exodus on foot of migrant workers from cities to villages across the country when he suddenly announced a lockdown without coordinating emergency services, giving people just four hours to prepare for one of the world’s strictest nationwide confinements.

By the end of November, with the lockdown lifted, a reverse human flow saw farmers from the North Indian agricultural heartland streaming toward New Delhi, answering a call to protest the discredited farm reform laws.

Over the past two months, the farmers have held a sit-in on the outskirts of New Delhi, setting up outdoor kitchens to feed tens of thousands of protesters making up one of India’s largest sustained protests.

But the protest has also had a human cost. Camping outdoors in the North Indian winter, through chilly rain has claimed more than 160 lives, according to an independent researcher. Indian media have attributed the deaths to the weather, illness or suicide.

Unfazed by these challenges, the farmers of the Punjab and neighbouring states have stuck to their demands, with their protest, garnering support from farmers across the nation and capturing the imagination of Indians opposed to Modi’s Hindu supremacist policies but lacking the mobilisation to confront his government.

For months, the protest movement managed to unite farmers and landless agricultural labourers regardless of their caste, class, gender and bridging ideological divides between leftist unions and traditional community organisations.

Caught unprepared by the sheer scale and determination of the protesters, the government has held 10 rounds of talks with farm union representatives, with the issue moving up to the country’s highest court.

The farmers are demanding a complete repeal of the new laws, which they fear will remove the scant protection they have enjoyed, leaving them at the mercy of corporate giants without the means to ensure they get fair treatment.

Earlier this year, the Indian Supreme Court ruled that the laws should be temporarily halted until a committee of experts, appointed by the court, could consult with government officials and protesting farmers to try to find a solution to the dispute.

It failed to break the impasse. Farm union representatives questioned the makeup of the experts committee, noting that all four members were in favour of the agricultural laws and sparking a Supreme Court statement expressing disappointment over the “unnecessary aspersions” cast on the court-appointed panel.

The government’s offer to temporarily halt the laws for 18 months was viewed by the farmers as an attempt to “buy time”, according to Sandhu. “By pushing the issue by 18 months, the government was trying to buy time to break the protests, and probably buy the protest leaders. It also meant pushing the issue to 2022, closer to the 2024 general elections, which suits the BJP since they can then make election promises, as they did in 2014, and win the election,” he explained.

A tale of competing protest trails

In the lead-up to Tuesday’s planned rally, the Supreme Court last week asked the government to withdraw its plea against the tractor rally on Republic Day and reiterated that it will not pass orders against the protest march.

In the absence of a court ruling, the government attempted to block the January 26 rally into the heart of the Indian capital, opting instead for a march to a site in Haryana, well outside the city.

As protest leaders and the authorities haggled over march routes, an umbrella group of 32 farmers unions – the Sanyukt Kisan Morcha (SKM) – agreed to the government’s plan on Monday.

Another umbrella group – the Kisan Mazdoor Sangharsh Committee (KMSC) – however stuck with the original plan to march peacefully into the heart of the Indian capital.

In a statement issued late Tuesday, the SKM condemned the violence on Republic Day, blaming “antisocial elements” as well as the KMSC for the breaking the “rules and routes”.

There were no statements about a planned farmers’ march on foot to Parliament on February 1, when the country’s new budget will be presented.

Following the Republic Day events, Sandhu worried that “the farmers’ factions are falling into a trap” of breaking the extraordinary unity between diverse groups within the protest movement.

“Nobody understood why the decision was made to route the protest by keeping farmers on the outskirts of Delhi. The SKM didn’t spend enough effort to make the people understand. I think the SKM also underestimated the farmers by deciding everyone should follow the route. This is how power creeps up,” he noted.

By the end of the day, Twitter posts on the farmers protest had lost some of the morning’s sparkle. “Violence in a protest either by protestors against the state, or the state against protestors must be condemned. This is not a neutral position, this is a facet of democracy. Arson is illegal, it’s not a right. Disrespecting national symbols is not symbolic it’s illegal,” tweeted lawyer Sherbir Panag.

The #KisanTractorRally hashtag also drew posts from Modi’s supporters calling on the government to react to “terrorists” and “anti-nationalists” who used “tractors as weapons”.

Sandhu declined to predict how Tuesday’s events could affect the farmers movement in the immediate future. “It’s clearly too early to say,” he insisted. But he was convinced the chatter on Twitter, including calls for a government crackdown, would not end the crisis. “Twitter talk does not change the reality on the ground for the farmers. They will continue to push for their demands. The support the SKM instituted could get questioned, I think. But the farmers aren’t going anywhere, the government can’t simply wish them away.”

After tear gas and baton charges, farmers are exuberant as tractors, horses and crowds overrun the roads, and security forces leave the scene. #TractorsRally #FarmersProtest pic.twitter.com/PuRHEEo7Oy