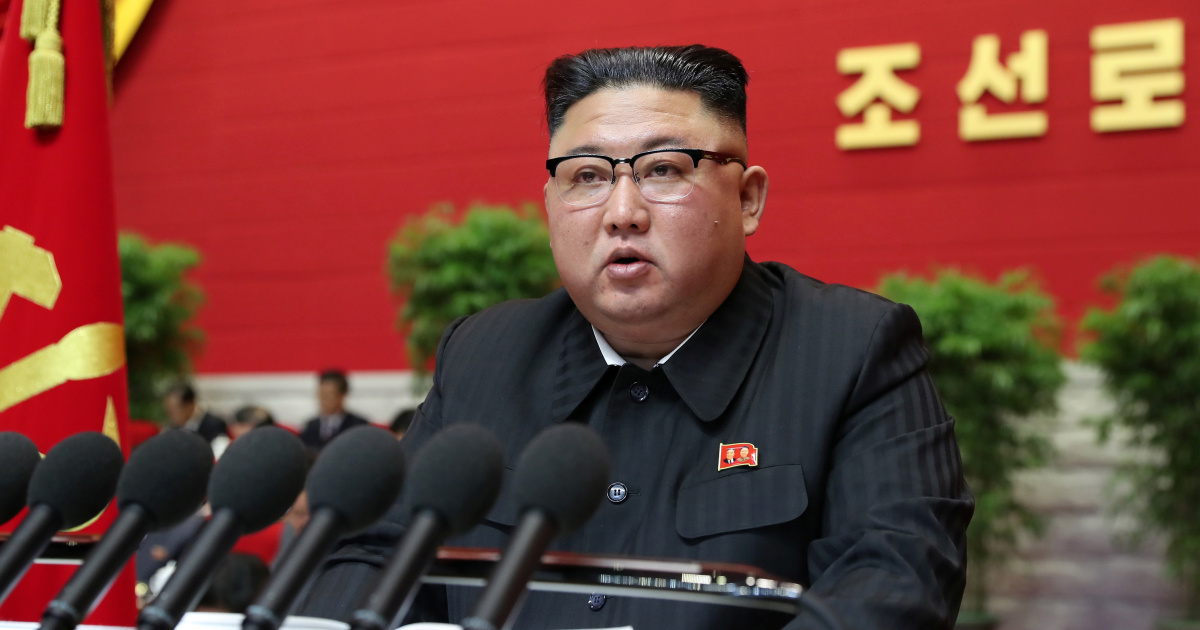 In an opening speech at the congress that began Tuesday, Kim said that the developmental goals set at a 2016 congress “were not met in almost all areas to a great extent,” according to the North’s official Korean Central News Agency.

“We should further promote and expand the successes and victories that we’ve achieved through our painstaking efforts but prevent us from having the painful lessons again,” he was quoted as saying.

The Workers’ Party Congress, one of the North’s biggest propaganda spectacles, is meant to help Kim show a worried nation that he’s firmly in control and to boost unity behind his leadership in the face of Covid-19 and other growing economic challenges.

But some observers are skeptical that the stage-managed congress will find any fundamental solutions to North Korea’s difficulties, many of which stem from decades of economic mismanagement and Kim’s headlong pursuit of expensive nuclear weapons meant to target the U.S. mainland.

Kim, 36, is holding the congress, which is expected to last a few days, amid what may be the toughest challenge of his nine-year rule and what he has called “multiple crises.”

Authoritarian North Korea is one of the poorest countries in Asia, and the already besieged economy is being hammered by pandemic-related border closings with China, the North’s major economic lifeline, the fallout from a series of natural disasters last summer and persistent U.S.-led sanctions over the nuclear program.

U.S. President-elect Joe Biden, who takes office later in January, will likely maintain the sanctions and avoid any direct meeting with Kim until North Korea takes significant steps toward denuclearization.

The congress met in Pyongyang to determine “a fresh line of struggle and strategic and tactical policies,” with thousands of delegates and observers in attendance, KCNA reported.

In his speech, Kim described the present difficulties facing his government as “the worst of all” and “unprecedented,” according to KCNA.

It’s not the first time for Kim has been candid about flawed systems and policies. Last August, he acknowledged economic “shortcomings” caused by “unexpected and inevitable challenges.” Also last year he said that North Korea lacks modern medical facilities and that anti-disaster conditions in coastal areas is “poor.”

Few experts doubt Kim’s grip on power. But a prolonged coronavirus-related lockdown may be further destabilizing food and foreign exchange markets and aggravating livelihoods in North Korea. That could possibly lessen Kim’s authority, some observers say.

Leif-Eric Easley, a professor at Ewha University in Seoul, said that “the fundamental problem” is that “Kim wants regime-sustaining economic growth while retaining nuclear weapons.”

“Pyongyang is thus likely to demand sanctions relief for merely reducing tensions rather than making progress on denuclearization,” he said.

U.S.-led sanctions toughened after Kim’s unusually aggressive run of nuclear and missile tests in 2016 and 2017. They maintain a ban on major export items such as coal, textiles and seafood. Nevertheless, Kim has still repeatedly pushed for an expansion of his nuclear arsenal to cope with what he calls U.S. hostility.

Kim entered talks with President Donald Trump in 2018, but their diplomacy has been deadlocked for about two years because of wrangling over the sanctions.

The pandemic and typhoons and flooding last summer — which destroyed houses, farming land and other infrastructure across North Korea — have further hurt the North’s economy.

After a yearlong closure of its border with China, North Korea’s biggest trading partner, bilateral trade volume plummeted by about 80% in the first 11 months of last year from the corresponding period in 2019, said analyst Song Jaeguk at Seoul’s IBK Economic Research Institute. North Korea’s GDP was estimated to have contracted by 9.3% in 2020, he said.

Following the sharp drop in external trade, North Korea experienced a fourfold increase of imported foodstuffs like sugar and seasonings at markets while its factory operation rate dropped to its lowest level since Kim took power because of a shortage of raw materials, South Korea’s spy agency told lawmakers in late November.

“I can’t think about any words to describe how difficult is the situation the North Koreans are going through now, rather than saying they’re suffering tremendously,” Song said. “If the coronavirus pandemic continues, they’ll suffer harder.”

Kim has been pushing to burnish an image as a caring leader.

State media said Kim sent New Year’s Day cards to ordinary citizens in what Seoul called the first such letters by a North Korean leader in 26 years. During a speech in October, Kim shed tears while thanking the people for withstanding difficulties. He’s also made an unusually large number of visits to rural areas hit by the typhoons and flooding.

Officially, the congress is the party’s highest-level decision-making organ, though key day-to-day decisions are made by Kim and his inner circle. The delegates gathered for the congress are expected to endorse new initiatives by Kim without major debate. The congress would still provide Kim with a chance to solidify his authority by announcing a new vision, naming loyal lieutenants to top posts and calling for a stronger unity behind his leadership.

READ  Kingsley Moghalu: EU delegation to Nigeria invited me for discussion on 2019 elections

Many experts say North Korea has no other option but to maintain its border closure as the pandemic continues worldwide, because its public health care system remains broken and a major outbreak could cause dire consequences. Despite taking draconian anti-virus measures, North Korea has maintained that it hasn’t found a single virus case on its soil, a claim widely doubted by foreign experts.

During the congress, the North may issue conciliatory messages in consideration of ties with the incoming Biden administration while underscoring its traditional ties with China and Russia, Seoul’s Unification Ministry said in a report on the outlook for the congress.

Kim didn’t mention the United States or South Korea in his speech Tuesday. He’s expected to make a few more speeches before the congress ends.

Some experts say Kim won’t likely launch a major provocation anytime soon because that would further dim the prospect for early talks with the Biden government, which faces many urgent domestic issues.