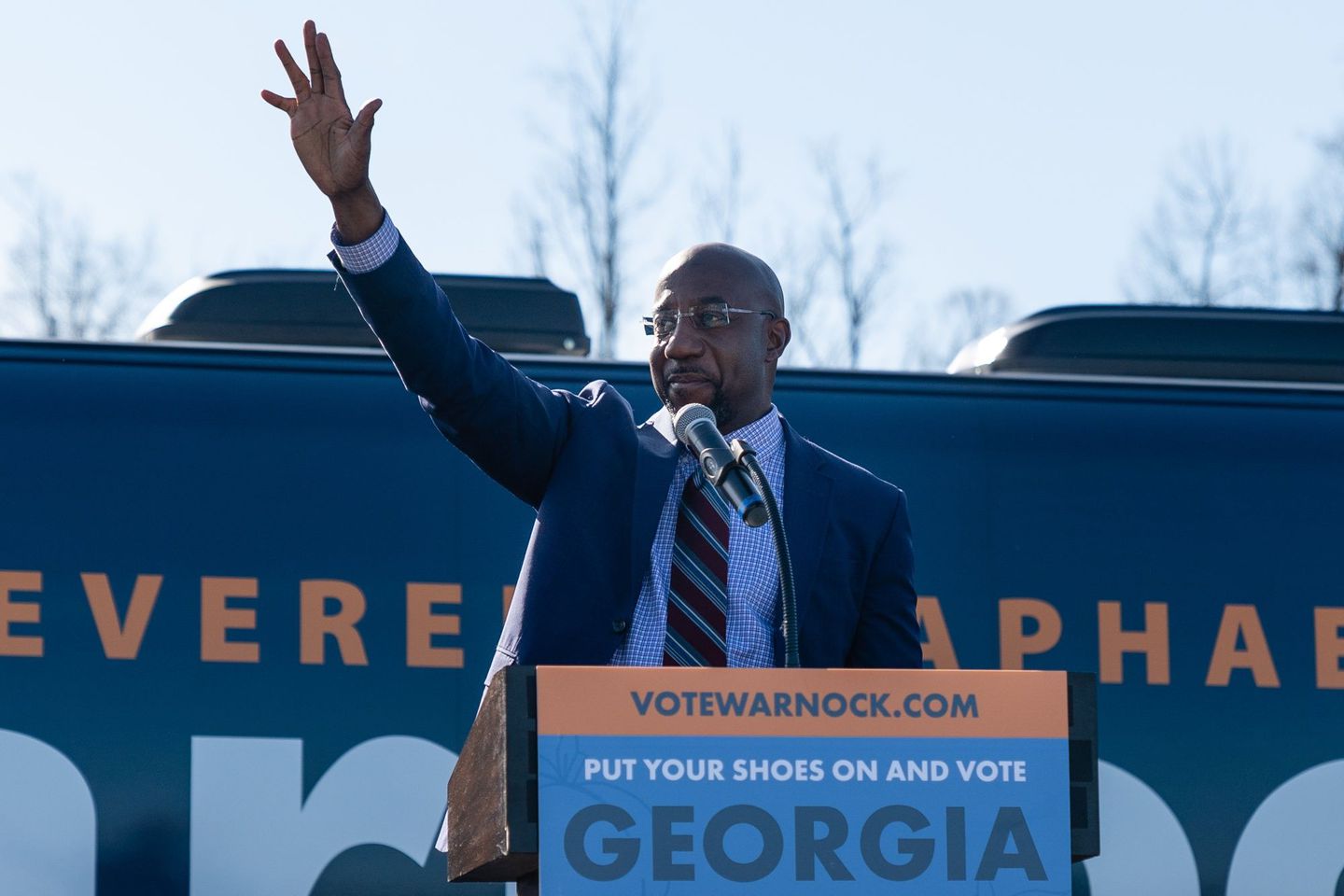 Democrat Raphael Warnock ousted an incumbent Republican Wednesday in the first of two critical runoff elections in Georgia that will decide control of the US Senate at the outset of Joe Biden’s presidency, networks projected.

Warnock, a Black pastor with deep roots in Georgia, narrowly ousted his rival Senator Kelly Loeffler, CBS, NBC and CNN reported, in what is an embarrassment for President Donald Trump as he wraps up his four years in office.

The outcome of the second runoff, which is coming down to the wire, will now determine which party controls the Senate in the first two years of the Biden era.

Early Wednesday morning, Warnock gave what amounted to a victory speech, saying he was honored by the faith that voters had shown in him and promising to work for all Georgians.

Warnock, appearing on video after midnight, expressed optimism, saying he had “proved that with hope, hard work and the people by our side, anything is possible.”

The two Senate runoff elections are leftovers from the November general election, when none of the candidates hit the 50% threshold. Democrats need to win both races to seize the Senate majority — and, with it, control of the new Congress when Biden takes office in two weeks.

President Donald Trump encouraged his loyalists to turn out in force even as he undermined the integrity of the electoral system by pressing unfounded claims of voter fraud to explain away his own defeat in Georgia.

In one contest, Republican Kelly Loeffler, a 50-year-old former businesswoman who was appointed to the Senate less than a year ago by the state’s governor, lost to Democrat Warnock, 51, who serves as the senior pastor of the Atlanta church where Martin Luther King Jr. grew up and preached.

The other election pitted 71-year-old former business executive David Perdue, a Republican who held his Senate seat until his term expired on Sunday, against Democrat Jon Ossoff, a former congressional aide and journalist. At just 33 years old, Ossoff would be the Senate’s youngest member.

This week’s elections mark the formal finale to the heated 2020 election season more than two months after the rest of the nation finished voting. The heightened significance of the runoffs transformed Georgia, once a solidly Republican state, into one of the nation’s premier battlegrounds during the final days of Trump’s presidency.

Biden and Trump campaigned for their candidates in person on the eve of the election, though some Republicans feared Trump may have confused voters by continuing to make wild claims of voter fraud as he tries to undermine Biden’s victory. The president has assailed Georgia Secretary of State Brad Raffensperger, a Republican, repeatedly for rejecting his fraud contentions and raised the prospect that some ballots might not be counted even as votes were being cast Tuesday afternoon.

State officials said there were no major problems with voting on Tuesday.

Gabriel Sterling, a top official with the Georgia secretary of state’s office, said voting was smooth across the state with minimal wait times, though lines of around an hour built up in Republican-leaning Houston, Cherokee, Paulding and Forsyth counties.

While they have no merit, Trump’s claims about voter fraud in the 2020 election have resonated with Republican voters in Georgia. About seven in 10 agree with his false assertion that Biden was not the legitimately elected president, according to AP VoteCast, a survey of more than 3,600 voters in the runoff elections.

Election officials across the country, including the Republican governors in Arizona and Georgia, as well as Trump’s former attorney general, William Barr, have confirmed that there was no widespread fraud in the November election. Nearly all the legal challenges from Trump and his allies have been dismissed by judges, including two tossed by the Supreme Court, where three Trump-nominated justices preside.

Even with Trump’s claims, voters in both parties were drawn to the polls because of the high stakes. AP VoteCast found that 6 in 10 Georgia voters say Senate party control was the most important factor in their vote.

In Atlanta’s Buckhead neighborhood, 37-year-old Kari Callaghan said she voted “all Democrat” on Tuesday, an experience that was new for her.

“I’ve always been Republican, but I’ve been pretty disgusted by Trump and just the way the Republicans are working and especially the news this weekend about everything happening in Georgia,” she said. “I feel like for the Republican candidates to still stand there with Trump and campaign with Trump feels pretty rotten. This isn’t the conservative values that I grew up with.”

Washington County is the first county so far to flip from Perdue in November to Ossoff today.

But 56-year-old Will James said he voted “straight GOP.”

He said he was concerned by the Republican candidates’ recent support of Trump’s challenges of the presidential election results in Georgia, “but it didn’t really change the reasons I voted.”

“I believe in balance of power, and I don’t want either party to have a referendum, basically,” he said.

Even before Tuesday, Georgia had shattered its turnout record for a runoff with more than 3 million votes by mail or during in-person advance voting in December. The state’s previous record was 2.1 million in a 2008 Senate runoff.

Democrats counted on driving a huge turnout of African Americans, young voters, college-educated Georgians and women, all groups that helped Biden win the state. Republicans, meanwhile, have been focused on energizing their own base of white men and voters beyond the core of metro Atlanta.

If Republicans win either seat, Biden would be the first incoming president in more than a century to enter the Oval Office facing a divided Congress. In that case, he would have little shot for swift votes on his most ambitious plans to expand government-backed health care coverage, address racial inequality and combat climate change.

A Republican-controlled Senate also would create a rougher path to confirmation for Biden’s Cabinet picks and judicial nominees.

With many Republicans skeptical of the outcome even before the results were announced, Georgia Republican Party Chair David Shafer said the party was closely watching the vote counting.

“Other than the good Lord above, we are trusting no one,” Shafer said during an election night event at an Atlanta hotel, noting that 8,000 Republican volunteers were observing voting and counting. “We will have eyes on every part of this process, and we are doing everything in our power to restore the confidence of the people in the integrity of our elections.”