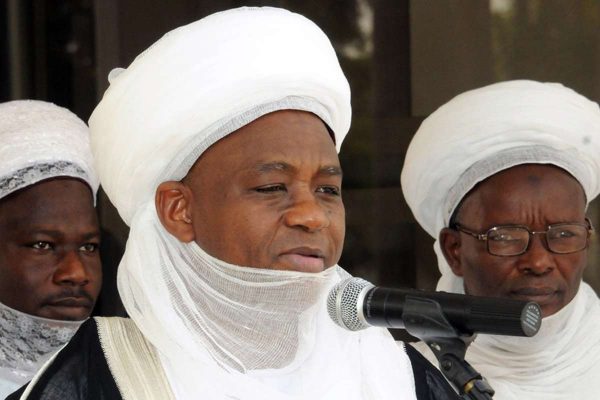 The Sultan of Sokoto said he wondered why the military could not occupy Lake Chad and Sambisa forest to wipe out Bokoharam Insurgents.

The Sultan of Sokoto, Sa’ad Abubakar has urged the Nigerian military to put in more effort in tackling Boko Haram Insurgents.

He sighted when he was in the army as an example of what the military should be doing now.

Sultan of Sokoto, Sa’ad Abubakar who led a delegation of the National Council of Traditional Rulers on a condolence visit to Governor Babagana Zulum of Borno state on Monday December 14, wondered why the military could not occupy the Lake Chad and Sambisa forest (strongholds of the insurgents).

He recalled how they occupied Lake Chad part of Nigeria for six months when he was a Lieutenant in the Nigerian army.

“If we want peace, we have to do away with those terrorists who occupy that place and see nothing good in other people except those that believe in their own negative ideas.

“We occupied the Lake Chad part of Nigeria for six months. I was a Lieutenant, I was the operation officer and I have my maps. In Lake Chad that time, we had 36 islands under Nigeria, we occupied 16 of them, the biggest was king Nasara, we controlled that part of Nigeria effectively well as a battalion.

“I have known Maiduguri since when I was a small kid, we have grown up here. I served in Bama, I lived in Bama for over two and half years in the barracks. The same barracks I served as Lieutenant was the same barracks vandalized and bombed.”