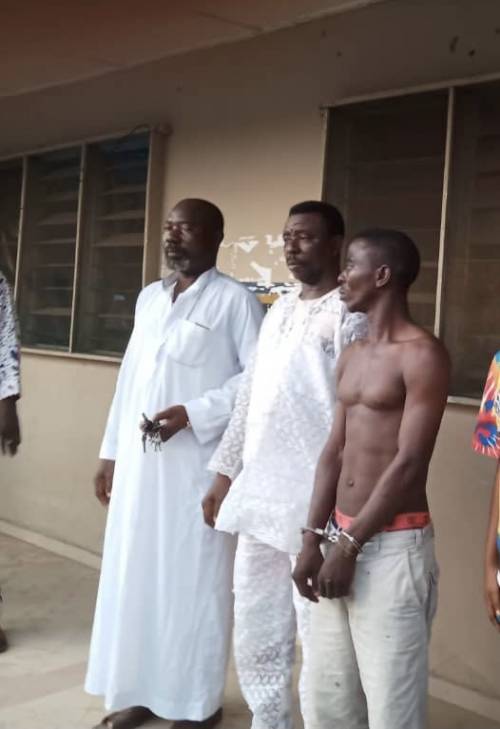 Luck has ran out on some deadly ritualists and kidnappers after they were apprehended in Ondo.

It was gathered that the suspects were arrested at a house where abducted persons were slaughtered in Igbokoda, Ilaje Local Government Area of Ondo State.

The suspects, Bode Omoboye, Eric Ogungbamila and Tayo Loto who served as their agents, are currently being detained at the Igbokoda police division.

According to residents of the community, Tayo confessed after an interrogation that he was sent to Kogi State by Omoboye and Ogungbamila to kidnap people and bring them to Igbokoda for rituals.

“I want to appeal to Nigerians to take this case seriously, especially the Governor of Ondo State, Oluwarotimi Akeredolu, and his Kogi State counterpart, Yahaya Bello because this case involves two states,” said a resident who narrated the incident on Facebook.

He added, “A guy named Loto Tayo has confessed after interrogation at NURTW motor park in Igbokoda that he was sent to Kogi State by two men from Igbokoda to go and kidnap people for rituals as he has been doing for them for a very long time.

“Though Tayo was successful this time around, having spent two weeks in Lokoja looking for whom to kidnap for the rituals, he came to Igbokoda on the 12th of December 2020 with two beautiful ladies and a guy.

“On their way coming, Tayo lodged at Brytelite Hotel along Igbokoda road in Okitipupa where the duo of Eric and Bode went to meet him to confirm the job.