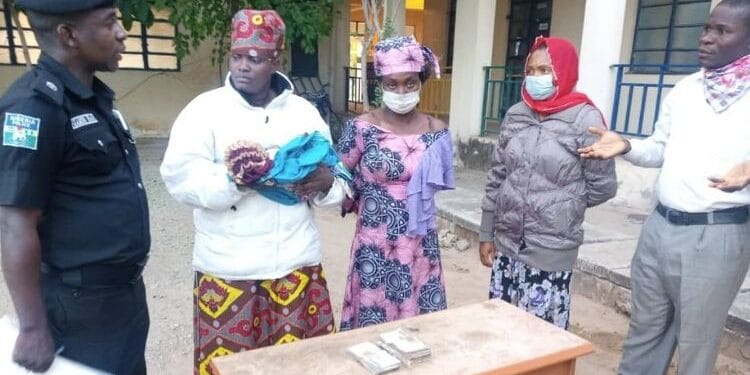 Katsina State Command of the Nigeria Police Force has commenced probe on one Zainab Adamu following her arrest alongside three others over an alleged sale of an infant baby in the state.

According to the report confirmed to newsmen by the state police spokesman, Isah Gambo, Adamu was arrested for selling her own child for N300,000.

The 25-year-old lady alleged to be a sex worker conspired with one of her friend identified as Ruth Kenneth, a resident of Kofar Kaura area in the state to sell her four months old baby to one Chinwendi Omeh of Ekwusigo LGA of Anambra State at the cost of N300,000.

Adamu who is said to be an indigine of Adamawa state was nabbed by the security operatives on November 26, 2020, following an intelligent tip-off, Naija News understands.

Also in connection to the selling of the infant, one Chukwudi Elias Nnali who is said to be a sibling to Chinwindi Omeh was apprehended by the security men on the same day. Naija News understands that the sums N165,000 and N85,000 were recovered from Zainab Adamu and Ruth Kenneth respectively as proceeds of the sale of the baby.

However, the police SP revealed that investigation is ongoing and the culprits will be made to face the wrath of the law thereafter.

Meanwhile, the Islamic State (IS) has claimed responsibility for the abduction of a Red Cross aid worker in northeastern Nigeria’s Borno State Naija News reports.

The group said it abducted the man after setting up a roadside checkpoint on the road between Kareto and Gubio on Tuesday.