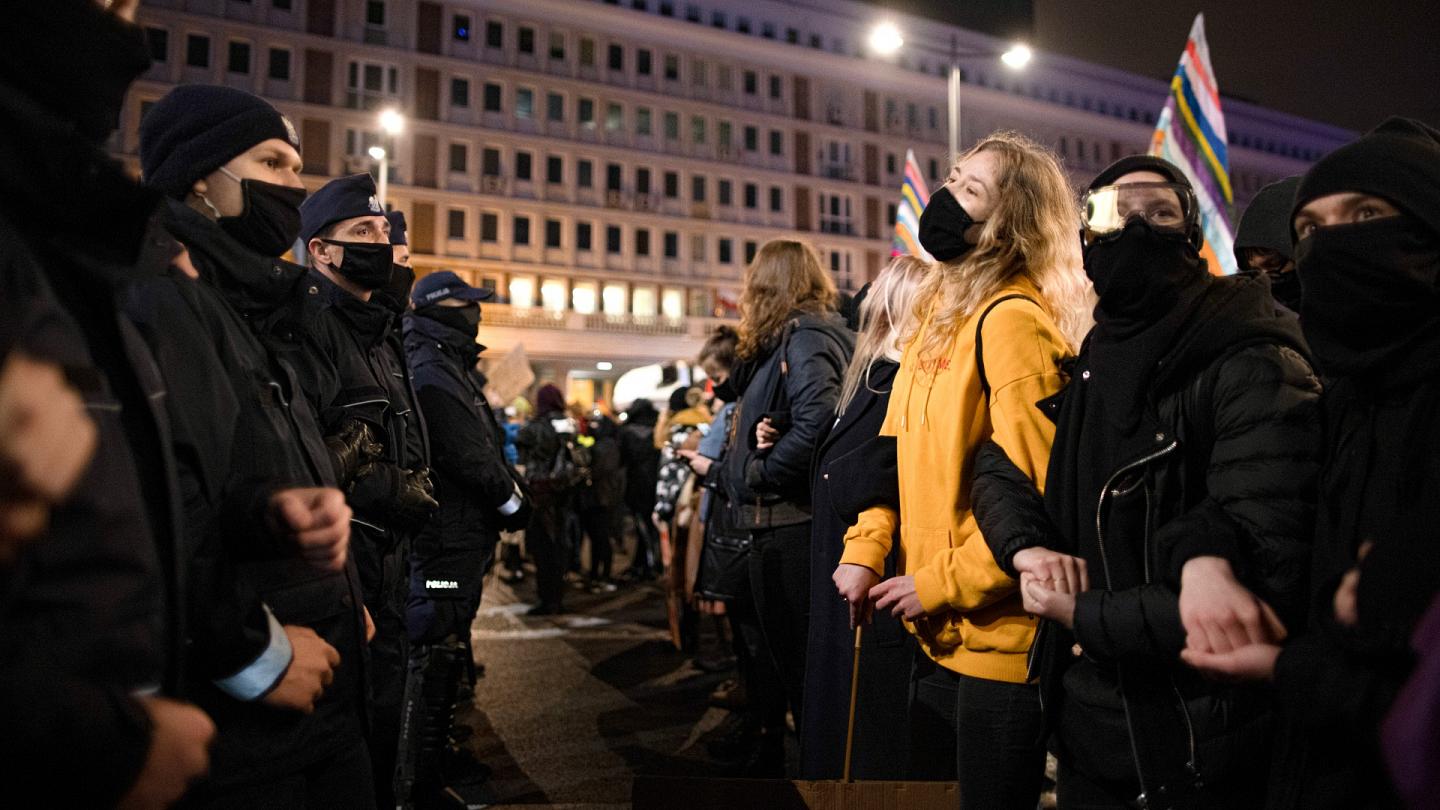 Police in Poland are using increasingly violent tactics against peaceful demonstrators at women-led protests over abortion rights, according to activists.

Authorities have thrown protesters on the ground, hit them with telescopic batons, and used kettling — a tactic that involves employing blockades to contain a crowd within a limited area — a human rights lawyer who has been representing the demonstrators told Euronews.

Witnesses said plainclothes officers, not all of whom were donning armbands identifying them as police, beat demonstrators with batons last Wednesday night. Authorities also reportedly used tear gas against protesters.

At least 60 protesters, including one as young as 17, have been detained in recent weeks, according to human rights lawyer Eliza Rutynowska.

This figure is higher than the number of people arrested during a so-called “independence march” through the Polish capital Warsaw when nationalists and far-right individuals violently clashed with police.

“We know that a lot of the protesters are being manhandled once they are taken to police cars and during the detainments themselves,” Rutynowska added.

Civil society organisations, including the NGO CIVICUS and the International Planned Parenthood Federation’s European Network (IPPF EN), said they have “serious concerns” about authorities’ use of “excessive force” on protesters and called on them to stop “detaining and intimidating” demonstrators.

Amnesty International has said that it was “horrified” about the reported violence and expressed deep concerns at the detentions of the protesters.

There are also claims that young people, in some cases minors, have been detained or intimidated by authorities.

One 17-year-old protester was held in police custody, and while he is legally considered a minor, he is old enough to be subject to criminal liability under Polish law, according to Rutynowska.

A 14-year-old boy who had shared information on Facebook about a solidarity march with the women’s protests had police officers turn up at his door whilst he was taking part in remote classes, the lawyer said.

She claims they threatened him with the possibility of criminal charges, saying he had engaged in an illegal act, and they contacted his school.

A 14-year-old girl was confronted by a police officer while she was taking part in a solidarity march with her grandmother, Rutynowska said.

The girl was allegedly asked to prove her identity and threatened with being charged for taking part in an illegal gathering.

“It’s a huge amount of stress and pressure put on young people and young citizens that should not be there,” Rutynowska said.

Police officers not being prosecuted for violence

No police officers have been subject to disciplinary proceedings for violence towards the peaceful protesters, according to Rutynowska.

Polish police came under criticism on November 19 for using tear gas and force on mostly female and young protesters.

But following the incident, Interior Minister Mariusz Kaminski told parliament that the police officers used force because they found themselves “under attack” from the protesters.

“He (Kaminski) calls the actions of the police force adequate … so I don’t feel like they will be prosecuted for anything that they have done further,” the lawyer said.

She added that while most police officers themselves are silent, some are speaking out, with the Polish Society of Anti-Discrimination Law launching a pro bono project to support officers who publicly back protesters.

READ  Sowore Raises Alarm Over Plans To Kill Him

Demonstrations against the ruling Peace and Justice Party (PiS) have been springing up since October 22, prompted by a decision by the country’s Constitutional Tribunal to impose a near-total ban on abortion.

Political tensions have been extremely high since the ruling, which the government has yet to publish and thus legally ratify because of the huge pressure from the mass street protests.

A standoff with the European Union over a rule of law mechanism as well as a surge in coronavirus infections and frustration over the government’s handling of the pandemic are all contributing to a sense of deepening crisis in the country.