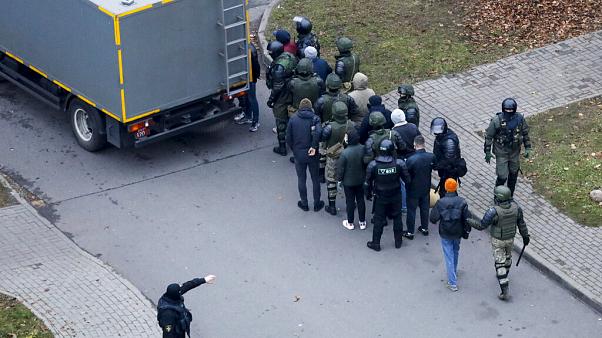 More than 1,100 people were arrested on Sunday in Belarus during protests calling for President Alexander Lukashenko to resign, a human rights group said.

The Viasna human rights organisation counted 1,127 arrests, the vast majority of which were carried out in capital Minsk.

Many of the demonstrators on Sunday carried placards in commemoration of Raman Bondarenko, an opposition supporter who died Thursday after reportedly being beaten in police detention.

Police in Minsk wielded clubs and used tear gas and stun grenades to disperse thousands of demonstrators. Viasna said that some of the people detained were beaten by the authorities.

Some 15 metro stations were closed and mobile internet access was limited, an AFP journalist reported.

Mass protests have been held weekly across the eastern European country since the August 9 presidential election in which incumbent Lukashenko was credited with more than 80 per cent of the vote. The opposition, the European Union and the United States do not recognise the results.

Lukashenko, who has been in power for 26 years, said on Friday he had asked investigators to probe the Bondarenko’s death “honestly and objectively”.

Exiled opposition leader Svetlana Tikhanovskaya described the former soldier as a “man who was killed because he wanted to live in a free country”.

On Sunday she described the crackdown on protesters with “gas, grenades, and firearms” as “devastating” and called for international support for the demonstrators.

“We ask our allies to stand up for the Belarusian people and human rights. We need a humanitarian corridor for the injured, support for the media, international investigation of crimes,” she wrote on Twitter.