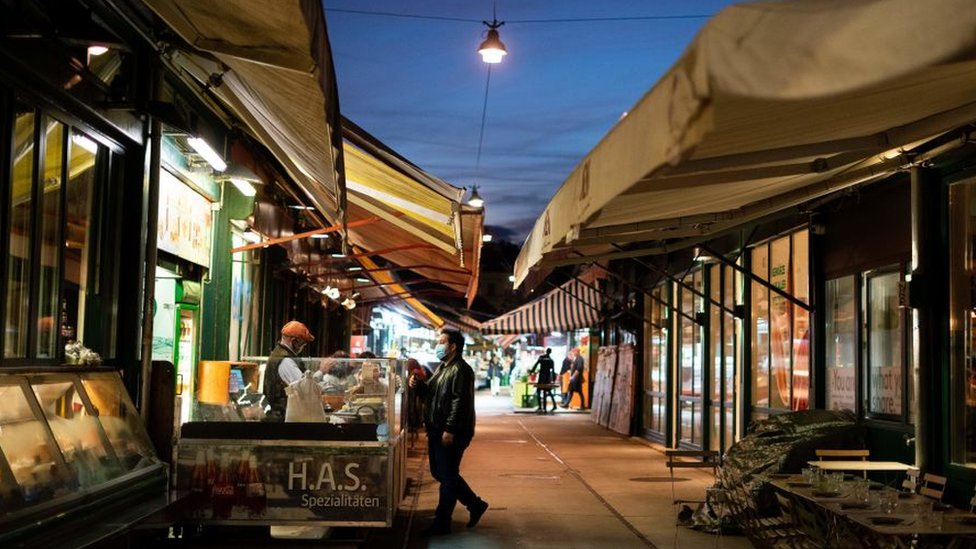 Here’s a look at some of the developments concerning the pandemic in Europe this weekend. New stories may be added later:

Austria locks down with new school and shop restrictions

Austria is closing schools and non-essential shops, two weeks after a partial lockdown and night-time curfew failed to stem the virus from spreading across the country.

The new restrictions, announced by Chancellor Sebastian Kurz at a news conference, begin on Tuesday and run until December 6. Free movement will also be strictly limited to limited circumstances, such as work, essential shopping or exercise.

All shops will have to close apart from food stores, pharmacies, banks, post offices and others deemed essential.

High schools and universities were already closed but from next week primary and middle schools will have to practise online teaching too.

The regions of Italy that include the cities of Naples and Florence have officially become coronavirus red zones on Sunday, the latest signals of the dire condition of Italian hospitals struggling with a surge of new admissions.

Campania and Tuscany join five other red-zone regions and autonomous provinces, including Italy’s virus epicenter, Lombardy, and the southern region of Calabria, where the health system is currently under government control.

Bars and restaurants must close for a minimum of two weeks, while some hotels have shut because of less demand.

The director of the National Health Institute, Gianni Rezza, said the stricter measures were justified by a “worrisome increase in hospitalizations” as Italy’s rate of new confirmed cases reached 650 per 100,000 people.

Deaths from the coronavirus have topped 1,000 in Greece, and authorities say that over half occurred since Oct. 18.

The Greek government has decided to shut down elementary schools, kindergartens and day care centers for two weeks starting Monday. Children will be schooled at home, as is already happening with high school and university students.

Authorities have stepped up controls and enforcement of a 9 p.m. – 5 a.m. curfew, including by making arrests.

Two foreign exchange students who hosted an after-hours party at their apartment in the northern city of Thessaloniki were arrested at 10.30 p.m. Friday and fined 3,000 euros ($3,550) each on the spot. The 24-year-old Palestinian man and 21-year-old woman from France received suspended prison sentences of 2 years and two months on Saturday.

Their 15 party guests, all university students from western Europe, were fined 300 euros ($355) each but not arrested.

German Chancellor Angela Merkel says nursing home workers and the people they are caring for will be among the first to get access to coronavirus vaccines.

Merkel said Saturday in her weekly video address that staff and residents of nursing homes will “receive priority” as soon as a vaccine is available.

Almost one million people in Germany live in nursing and care homes. The country is seeking to buy 100 million doses of a vaccine being developed by German pharmaceutical company BioNTech and U.S. partner Pfizer.

Germany’s disease control agency reported a further 22,461 confirmed cases of COVID-19 in the 24 hours to Saturday, as well as 178 additional deaths. Since the start of the pandemic, Germany has recorded 773,556 confirmed cases and 12,378 deaths.

READ  Buhari yet to see IPOB in Japan

UK: Stores ‘may never reopen’ if lockdown not eased by early December

Meanwhile, more than 60 leading retailers in the UK have warned that unless all shops are allowed to reopen by the start of December, “many stores may never reopen”.

CEOs have written a joint letter to the Times saying that hundreds of thousands of retail jobs are at risk. They point out that November and December account for over a fifth of all retail sales, and cite government reports to argue that closing shops does little to stop the spread of the virus.

Non-essential shops as well as leisure centres and entertainment venues are closed as part of the lockdown in England, which lasts until December 2. Retailers are currently allowed to open in Scotland, Wales and Northern Ireland.

Saint Nicholas, the gift-bearing patron saint of children, arrived in the Netherlands on Saturday amid a partial coronavirus lockdown that forced the cancellation of celebrations in many towns and cities.

The Dutch celebrate what they call Sinterklaas on Dec. 5 by giving gifts to children, but the saint arrives — legend has it — in the country weeks earlier in what is usually a nationwide party.

A nationally televised arrival celebration went ahead Saturday without the usual crowds of thousands of children.

Other towns and cities were holding online events and at least one town organized a drive-through celebration where children could see Sinterklaas from the socially distanced safety of cars.

The celebrations have in recent years seen protests by activists against Sinterklaas’ helper, Black Pete, who is often portrayed by white people in blackface makeup. Opponents call the character a racist caricature, while supporters argue he is a harmless children’s figure and part of Dutch tradition.

Therapeutic and other advances mean that patients more often are spending days instead of weeks in critical care and surviving in greater numbers. Read the full story here.

However, there’s little Christmas cheer this year for France’s small businesses as the traditional festive shopping season approaches. More on that story here.