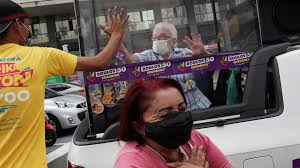 Bolsonaro’s win ushered in a new style of politics summed up in his nickname, the “Tropical Trump,” and put the final punctuation mark on 13 years of left-wing rule in Brazil that ended with the impeachment of president Dilma Rousseff in 2016.

Now, in the first elections since Bolsonaro swept to power, the Latin American giant will choose its 5,568 mayors and city councils, with analysts watching to see where the various political camps stand midway to the next presidential elections in 2022.

Bolsonaro heads into Sunday’s first-round vote weakened by his political idol Donald Trump’s loss in the US and his controversial handling of the coronavirus pandemic, which has killed more people in Brazil than any country except the United States.

But his approval numbers are strong — more than 40 percent recently — and he still excels at whipping his hardline base into a frenzy with his social media diatribes.

In recent days, he has added to that a string of live broadcasts on Facebook to endorse his favorite candidates — including his son Carlos, a Rio de Janeiro city councillor — and urge Brazilians to stop the country from “going red.”

However, the president’s picks do not look set to win Brazil’s biggest cities.

But analysts say the country is headed for a new wave of conservative victories, elevating a raft of Evangelical candidates and ex-cops and -soldiers who have made religion and security — signature Bolsonaro issues — central in their campaigns.

“2020 is going to deepen what we saw in 2018: the advance of right-wing parties,” said political scientist Oswaldo Amaral of the University of Campinas.

But it will be hard to judge to what extent that is a win for Bolsonaro, who quit his party, the Social Liberals (PSL), last year, and has not yet followed through on plans to launch a party of his own.

“Bolsonaro is the first president since the return to democracy (in the 1980s) to go into municipal elections without a party,” said political scientist Felipe Nunes of the Federal University of Minas Gerais.

“So it will be harder to assess it as a victory or defeat,” he told AFP.

Turnout is expected to be low, thanks largely to coronavirus fears among the country’s 148 million voters.

In a survey by the Democracy Institute, 27 percent of Brazilians said they feared voting because of Covid-19, and 53 percent had “little interest” in the elections.

In an effort to generate buzz and overcome apathy, many candidates have resorted to colorful nicknames and campaign gimmicks.

There will be 18 Obamas, three Trumps and 84 Bolsonaros on the ballot, according to a count in the Brazilian media — not to mention 99 Tiriricas, borrowing the name of a clown elected to Congress in 2010 on the slogan, “It can’t get any worse.”

He has since been reelected twice.

The Brazilian left meanwhile remains weakened and divided after the spectacular unraveling of the Workers’ Party (PT) with Rousseff’s impeachment and the jailing of her predecessor, party founder Luiz Inacio Lula da Silva, on corruption charges.

The party was thrashed at the last local elections, in 2016, just after Rousseff’s impeachment.

Polls indicate left-wing candidates could make the second round on November 29 in some major cities.

That includes the largest, Sao Paulo, where leftist Guilherme Boulos is polling second, ahead of Russomanno, the president’s candidate.

But at the national level, “things went very badly for the left in 2016 and 2018, and they’re set to stay bad,” said George Avelino, a professor at the Getulio Vargas Foundation.