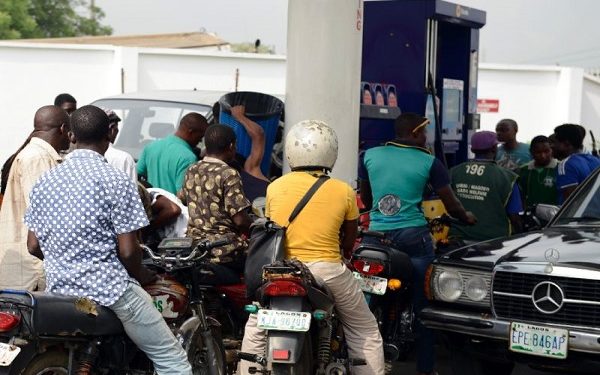 There was anger across the land on Friday after a new petrol price of N170 per litre unexpectedly came into effect.

It is an increase of N10 from the N160 per litre introduced only on September 4.

The Federation of Informal Workers’ Organisation of Nigeria said the new price and other policies of the federal government were more devastating than COVID-19.

Other Nigerians took to the social media to berate the government for what they called its insensitive disposition to the plight of Nigerians.

National Vice President of IPMAN, Alhaji Abubakar Maigandi, said: “The (PPPMC) last midnight told us that the ex-depot price is now N155.17 per litre. We have directed our marketers to sell for N170 per litre.”

He said the price would still depend on the forces of demand and supply.

Dan –Mallam said: “I call on all our members within our branch to immediately change the price of their metres from N160 per litre to between N168 and N170 per litre.

“This development came after we received a circular from PPMC, advising us on the upward review of the price after it reviewed the market fundamentals for the month of November 2020.

The Southwest zonal chairman of IPMAN, Alhaji Dele Tajudeen, described the price increase without any consideration for the current economic and political situation of the country as uncalled for.

He appealed to the federal government to stay action on the new price to avoid unnecessary tension in the country.

He asked government to “shelve the planned increase until further notice, to give room for consideration and adjustment.”

He said IPMAN would hold an emergency meeting with other stakeholders to “trash out this unbecoming and the arbitrary increase in ex-depot prices.”

Some filling stations in Lagos belonging to IPMAN members refused to sell petrol for a few hours yesterday because of what they saw as uncertainty of the new pump price.

IPMAN’s President, Mr Chinedu Okoronkwo, told the News Agency of Nigeria (NAN) in Lagos that that there was no need for panic buying because the move was based on the price notation to marketers by the PPMC.

READ  Bezos to step down as CEO of Amazon this year, transition to executive chairman

He said: “We buy from them and we heard that there is a new ex-depot price.

“Now people will like to know whether that is true from the source so that they will not sell at a loss.

“So the marketers are waiting for clarification from PPMC because a lot of people were not privy to the memo.

“Hopefully, it will be resolved soon and everybody will start selling.’’

Okoronkwo insisted that the Federal Government was right to remove subsidy on PMS in spite of the hike in the pump price of petrol which may hit N170 soon.

He said: “We know this was bound to happen as the price is now determined by market forces. But it will be beneficial to the country in the long run.

“More investors are coming into the sector, and once we are able to refine our products locally, the pump prices will reduce.

“Walter Smith Refinery in Imo is already up and running and people have started loading products from there. Dangote Refinery in Lagos will soon start operation too.

“We have others in Bayelsa and Rivers, and by 2021, we will be expecting the prices to stabilise.’’

Reacting to the new fuel price yesterday, the Federation of Informal Workers’ Organisation of Nigeria (FIWON) said the incessant rise in price of fuel was devastating the generality of Nigerians even more than COVID-19.

The General Secretary of FIWON, Mr Gbenga Komolafe, told reporters in Abuja that workers in the informal sector were being particularly hit by government policies such as the incessant hike in fuel price.

His words: “It is a shame and it remains an open sore that Nigeria as an oil-producing country could be importing fuel and we believe the Buhari administration has failed in this regard.

“The promise to revamp the economy and stop fuel importation is one of the reasons we voted for this government.

“The government should also invest in refineries like other OPEC (Organisation of Petroleum Exporting Countries) members. Even South Africa, which is not an oil-producing country, has a refinery.

“Government policies have devastated Nigerians more than COVID-19. Some workers complained that they received half salary, but workers in the informal sector did not even receive any salary.”

FIWON is a national network of informal, self-employed working people committed to the advancement of the working people in the informal sectors with over 50 million members in 170 organisations across 21 states.

Other Nigerians expressed their anger on the social media.

Chimezie Chukwuka Callistus said: “Can we survive this?”

Oyefeso Oladayo said: “Like seriously we don enter next levels finally,” while Adesegun Ogundeji said: “Nigeria elites and inconsistencies. In one breath, they will demand deregulation. When the price of oil falls in the international market and reflects in the pump price, they seek to take credit for a good decision. But when the price rises and reflects in the pump price, they blame government. It is either ignorance of the market dynamics or mischief.”

The Nigerian National Petroleum Corporation yesterday said the increase in the price of petrol was based on the prevailing realities of market forces of demand and supply.

It also said the corporation was aware of the purported increase in the Pipelines Product Marketing Company’s ex-coastal price and ex-depot price (with collection) to N130 and N155.17 respectively.

NNPC, in a statement issued in Abuja by its spokesperson, Kennie Obateru, however, said it wished to clarify that although there was an increase, the correct prices, as could be seen on PPMC’s Customer Express platform were ex-coastal price, N128; and ex-depot price (with collection), N153.17.

The Customer Express platform is an online portal for procurement of petroleum products, while PPMC is a subsidiary of NNPC.

NNPC advised marketers to make their purchases through the online Customer Express platform at the recommended prices.

The Peoples Democratic Party (PDP) yesterday described the hike in fuel price to N170 per litre as wicked.

The party also said the new price was unbearable in the face of current economic realities foisted on the nation by the Muhammadu Buhari administration.

A statement signed by the party’s National Publicity Secretary, Kola Ologbondiyan, said the new fuel price would rather worsen the already suffocating economic situation in the country.

“The PDP holds that the APC and its administration have no justification to increase the cost of fuel to anything above N100 per litre talk less of N170, when there are practical options to maintain affordable price given our production capacity and potentialities.

“It is evident that the continuous increase in the pump price of fuel under opaque and nebulous indices is a product of incompetence and large scale corruption being perpetrated by a few individuals in the Buhari administration, who are bent on fleecing Nigerians and holding our nation to ransom.

“Our party notes that the APC administration has failed to come clean on the parameters being used for the hike in prices vis-a-vis our production, export and accruing revenue.

“Indeed, the APC administration is not being honest with Nigerians regarding the status and volume of oil production, sales and accruing revenue.

“This is in addition to its failure to fix our refineries and end crude oil theft, allegedly to aid APC interests.

“This appears to provide answers to why the APC administration has failed to offer any explanation on huge fraud going on in the management of our nation’s oil resources including the alleged stealing over N9.6 trillion ($25 billion) by APC interests, as detailed in the leaked NNPC memo.

“It has also failed to publish details of its sleazy oil subsidy regime, including the involvement of APC interests in the claimed under-recovery for unnamed West African countries, running into trillions of naira, while Nigerians are made to bear the burden of high fuel costs.

“Such humongous fraud in the management of our oil resources is responsible for the high costs and unspeakable hardship being suffered by millions of Nigerians who can barely afford their meals and basic necessities of life.

“Our party urges President Buhari to end the corruption and the stealing of our oil resource under his watch by APC leaders, recover the looted resources and immediately reverse this increase in price of fuel.

“President Buhari should also take steps to fulfill his promise to revamp our refineries or accept his failures and apologise to Nigerians.

“It is still not yet late for him to get more competent hands to run our oil sector instead of imposing more hardship on Nigerians.”