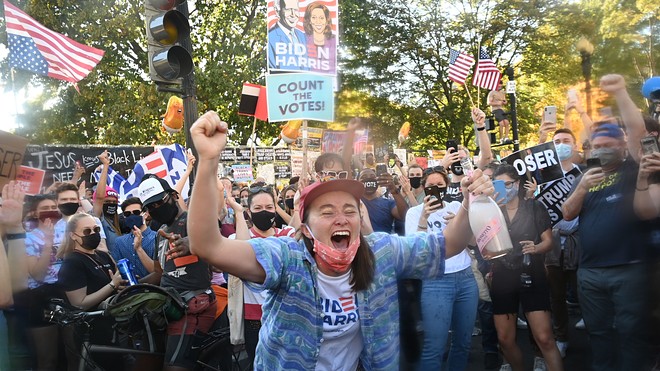 Major cable networks declared that Joe Biden had achieved the required Electoral College votes to make him the President-elect of the United States.

Street parties sprang up late morning in cities like New York, Atlanta, Philadelphia, and Washington, D.C., continuing throughout the day and late into the night. The celebrations culminated in Wilmington, Delaware, where Mr Biden and the Vice-president elect Kamala Harris made their victory speech. Americans got a first glimpse of the newly nominated President-elect and his deputy for the first time since the Saturday morning declarations.

The spontaneous celebrations came after a-week-long wait on election results since the Tuesday general elections that brought an end to Donald Trump’s re-election bid. Although the president has declined to concede the elections, vowing to resume multiple litigations from Monday, the mood in the country has been mostly celebratory, with people welcoming the change that Mr Biden appears to promise.

An elated duo of the newly elected executives took the stage in Delaware where a parking lot had been converted to the venue for the victory speech. As has been his style since the campaign season, the crowds were sequestered in their cars in the huge lot, a measure to comply with the new social distancing requirements to manage the ongoing COVID-19 pandemic that continues to ravage the country. People celebrate on Black Lives Matter Plaza across from the White House in Washington, DC, as Joe Biden is projected to win the US presidency. [PHOTO: TW @NBCNews]

In the U.S. capital city, Washington, D.C., thousands of masked celebrants besieged the newly erected walls outside the White House. On Monday, the White House put up make-shift walls as the country prepared for possible violence as the country took the polls this Tuesday. The expectations of violence did not come to fruition. Rather, thousands of people gathered to celebrate the outcome of the elections in the capital city that voted overwhelmingly for the former vice-president, with what currently stands as 93:5 percentage ratio, favouring the President-elect.
The crowds gathered on 16th Street, taking up the entire area now known as Black Lives Matter Plaza, downtown D.C. Twice, since 2016, have crowds close to this size taken up this amount of space near the White House. The first was in the immediate period following President Trump’s inauguration when women staged a march to protest his election. The second was part of the nation-wide protests over the wrongful death of George Floyd this summer. As at midnight on Saturday, the street parties in D.C. celebrating Mr. Biden’s election showed no signs of ending.

READ  US Election: Joe Biden Gets Closer To The White House In New York, thousands of celebrants took over the popular Times Square, midtown Manhattan, blocking off streets in America’s most populated city. As with other cities, car horns, shouts, and music celebrated the end to Mr Trump’s tumultuous presidency. Crowds danced and popped champaign even as most cities continue to receive new ballots and the incumbent president, alleging electoral fraud without evidence, vows to fight Mr Biden’s victory in the courts. In New York, no one spoke of President Trump. The crowds partied till nightfall and stayed on to listen to Mr Biden’s victory speech at about 8.30pm, Eastern Time Saturday.

In Philadelphia, street parties began since Friday as the large percentage of mailed-in ballots began to edge Mr Biden closer to President Trump who had till then taken the lead as voting results were announced in Pennsylvania. At the end of in-person voting on Tuesday, President Trump was ahead of the former vice-president with over 650,000 votes. But that margin began to narrow over the next few days as mailed-in ballots were slowly added to the tally. By Friday morning, Mr Biden overtook the president by 5,500 votes, a margin that only kept expanding until Saturday when the election was called in favour of the former vice-president. Pennsylvania has turned out to be the most significant swing state in the 2020 Elections, even as more ballots trickle in.

In his victory address in Wilmington, Delaware, the President-elect promised a fair presidency.

“It’s time to put away the harsh rhetoric, lower the temperature, see each other again, listen to each other again. And to make progress, we have to stop treating our opponents as our enemies. They are not our enemies, they are Americans,” Mr Biden said.

President Trump has not extended reciprocal goodwill to Mr Biden. Shortly before the election was called for his opponent on Saturday, the president tweeted: “I WON THIS ELECTION, BY A LOT!” A few hours later, he carried on his unsubstantiated allegations of electoral fraud on his Twitter page. Later in the day, his legal team also announced that the president would not concede the elections.

“Obviously he’s not going to concede when at least 600,000 ballots are in question,” Rudy Giuliani, a lawyer to the president, said. Mr Giuliani and his team have initiated multiple legal cases across at least four states, on behalf of President Trump.

Watch scenes from Philadelphia, where crowds continue to grow after a vote count gave Joe Biden a lead over President Trump in Pennsylvania.

On one side of the street, Biden supporters danced in celebration. On the other, Trump supporters protested the ballot-counting process. pic.twitter.com/xKL5dJ6WBM