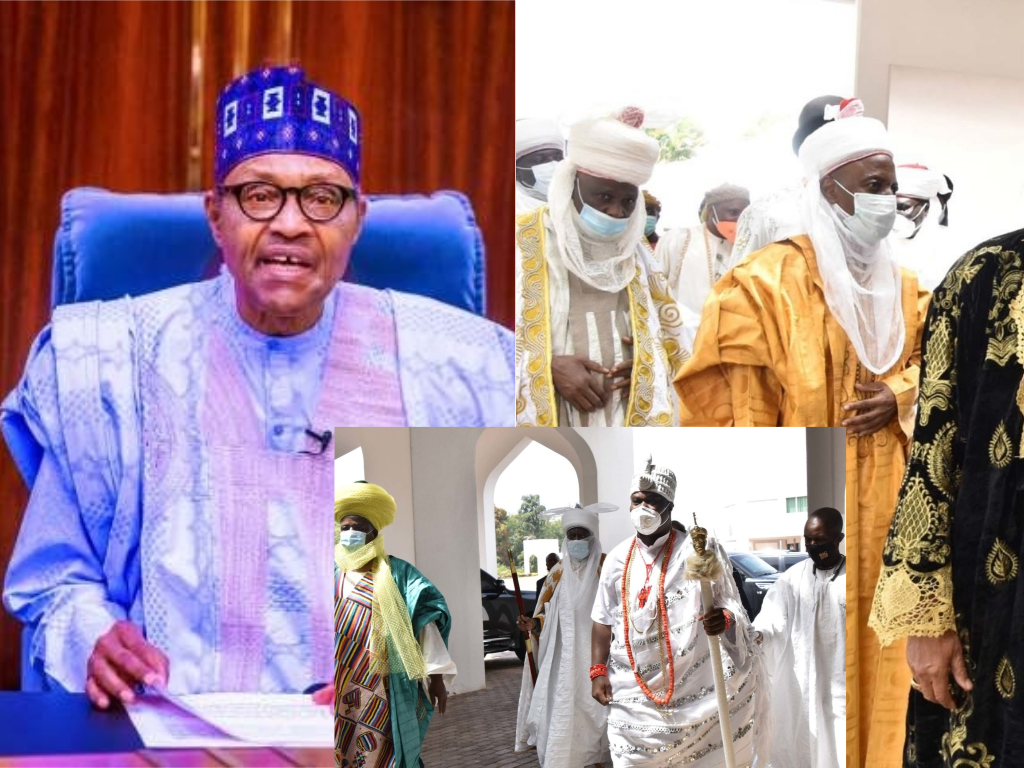 President Muhammadu Buhari on Thursday met with First class traditional rulers from the six geopolitical zone Nigeria at the Presidential Villa in Abuja.

Buhari during the meeting call on traditional rulers to support his government in addressing the demands of Nigerian youths.

He stated this at meeting with delegations of the National Council of Traditional Rulers of Nigeria led by the Sultan of Sokoto, Muhammadu Sa’ad Abubakar III and Ooni of Ife, Adeyeye Ogunwusi.

The President told the royal fathers that “we have heard the loud cries of our youth and children, and we are attending to their concerns.”

The president in a statement released through his media aide, Femi Adesina, said, “To succeed in all of this, we would require your support and voice to help amplify the message. Your proximity to the people places you in a unique position to communicate and ensure that our response is targeted and impactful.”

Buhari who described the role of monarchs as guardians of traditional values and culture as most critical, charged them not to “compromise their neutrality because this is what significantly confers on you, your moral authority and legitimacy.”

He added that his Chief of Staff, Prof. Ibrahim Gambari, would lead senior government officials to various parts of the country “and directly engage with you as part of this process. He will be reporting back to me on your various perspectives.”

He said: “I want to once again thank you for the role you all have played to calm down our youth with wisdom and authority. By instilling hope and keeping the peace, you have rendered the country great service.”

READ  Osun PDP to IGP: Aregbesola has a forgery case to answer

“We cannot allow anybody or group to threaten the peace or sabotage these efforts,” the President restated that “strong, transparent efforts are underway to address those rogue elements of the Nigerian Police Force. Simultaneously, the Nigerian Police Force will also undergo much needed reform that covers welfare, working conditions, and code of conduct. That will usher in a more professional workforce.”

Recognizing the primary and important role of the monarchs in helping to maintain peace and security in the country, the President expressed delight at their visit “given all that has happened recently in our country.”

Buhari while welcoming advice from the monarchs, promise to study them and take appropriate action.

Buhari also drew the attention of the eminent delegation to the challenges of COVID-19 pandemic in the world.

“We find ourselves in very turbulent times, with a global health pandemic that has been incredibly challenging. Economies have been crippled as the response to the pandemic has forced businesses to shut down or devise new means of transacting. For a country like ours, with a large informal economy, our citizens have been particularly hit.”

He noted, however, that his administration has “designed various schemes and taken many measures to soften the impact, despite our own revenue struggles as government,” while recognizing that “more needs to be done to cater to our fellow citizens, not just those in the urban areas but also those in rural areas.”

According to Buhari, “I am also fully aware that our strong farming belts have been impacted by floods. While we have seen record levels of farm outputs and increased level of fertilizer utilization, government through the Ministry of Agriculture and Rural Development and its agencies is working on how to help bring these farmers some relief.”

Admitting the enormity of these challenges and “our growing youth population,” the President declared: “There is no hiding place regarding how we should address insecurity concerns, youth unemployment, job creation, boosting industrialization and preparing for a transition into a digital economy.”